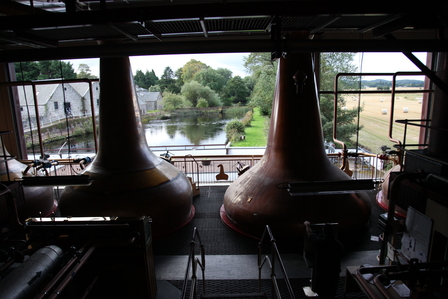 There are essentially two types of still, the pot still and the column still. Of the two, the pot still, also known as the alembic still, is the simplest and not unlike a giant kettle, indeed the Dutch call their pot stills Distilleerketel.

Pot stills have changed little in hundreds of years, and the design and shape of the chamber or 'pot' of modern day stills would be recognisable to distillers from centuries ago. Extensively pot stills consist of a chamber (pot) to which heat is applied. The contents boil and the vapours that collect in the head at the top of the pot are directed into a space that tapers to a narrow tube, called the swan's neck. This leads to the condenser where the vapours are cooled by running cold water so reverting them back to liquid form.

The biggest advance in pot still technology in the past few hundred years has been the method of heating the still. Distillers of old had little choice but to light a fire directly under their still but today high-tech boilers provide a reliable and controllable source of steam, allowing fine adjustments to be made to the running temperature of the still. Heating via steam jackets and steam heated serpentine coils also reduces the likelihood of burning associated with direct heated stills. However, despite advances in steam heating, some distillers still choose to use direct heat as they believe the slight risk of burning essential to the character of their distillate. They include cognac distillers and some malt whisky distillers.

Thanks to modern monitoring and testing equipment, today's distillers are also better able to judge how a still is running and when to cut from heads (or foreshots) to heart and heart (or spirit) to tails (or faints). However, despite these advances, pot stills are very inefficient users of energy and are also limited by having to be batch operated - meaning they are charged, operated and emptied, then cleaned before being filled with the next batch of wash.

The beginning of the 19th century saw attempts to develop a still to speed and improve the distilling process and in 1826 Robert Stein invented a still consisting of two columns. An Irishman and patent office cleric, Aeneas Coffey considerably improved the design of the new still and patented his 'Coffey' still in 1831.

Coffey's then radical 'column' or 'patent' still is also termed a 'continuous still' because, as the name suggests, they can be run continuously without the need to stop and start between batches as in pot still distillation. This coupled with the higher concentration of alcohol in the final distillate make column stills much more economical to operate than pot stills.

The invention of the Coffey still had a dramatic effect on the world's liquor industry as it enabled distillers to produce a much purer spirit, on a larger scale and cheaper than was previously possible. By the middle of the 19th century the quality of spirit produced from the new continuous stills was close to the standard of spirit we enjoy today. This had an obvious effect on vodka production but has also changed other spirit categories. For example, English gin distillers reduced or omitted the sugar previously used to soften the harshness of the old style gins to create a new style of gin that would eventually become known as 'dry gin', then 'London dry gin'. The column still also directly led to the creation of 'blended whisky', a category which outsells pot still produced malt whisky by factor close to ten to one.

As with any still, continuous stills work on the principle that water, alcohol and the various congeners in the wash all vaporise at different temperatures. The first column stills consisted of two columns but today's can consist of as many as seven interlinked columns. Column stills behave like a series of interlinked pot stills, each formed in a long vertical tube. Within the tube, or column, are usually plates like floors in an apartment block. On each floor, often referred to as a 'bubble plate', is a pool of trapped wash and holes in these plates allow rising vapour to bubble up through the wash.

In Coffey's still, wash enters at the top floor of the still and falls through the floors to meet steam rising from the bottom of the still. The steam vaporises the alcohols in the wash, and carries them upwards, while the wash (with its alcohols removed) falls to lower floors of the still where it boils and creates more steam.

The rising vapour, which is low in alcohol, will naturally condense in the trapped liquid on each floor but the law of physics dictates that energy cannot be created or destroyed, so something has to give, forcing something to evaporate from the layer of liquid. Because alcohol has a lower boiling point than water it is inevitably alcohol that evaporates. Thus alcoholic vapour passes through the floors and as it rises through the column, the temperature of each successive floor is slightly lower than the previous floor, so the vapour in equilibrium with the liquid at each floor is progressively more enriched with alcohol. Consequently the vapour becomes progressively more concentrated or purer as it rises through the column's floors.

Column stills allow what is termed as 'fractional distillation' as various different compounds (or fractions) are trapped according to their boiling point on different floors of the still so allowing each component of the distillate to be removed from that section of the still.

The more floors a column still has so the more rectified (purer) the finial distillate will be. Rather than build skyscraper column stills it is common to interlink several columns. As the spirit passes through the successive columns it becomes progressively purer.

In a four column still, the first column, called the Analyser has steam rising and wash descending. This strips the alcohol, producing 'high wines' at 65-70% alcohol by volume. The second, Extractive Column, starts the rectification process prior to the third, Rectification Column. A fourth Contracting Column basically recovers spirit from the heads (foreshots) and tails (faints) produced by the other three columns.

Modern fractional distillation columns often utilise vacuum pumps to lower boiling points within the still and such stills can concentrate ethanol alcohol to 95.6% by volume. This mixture is an azeotrope with a boiling point of 78.1°C and further rectification (purification) by distillation is not possible, nor necessary for the production of alcoholic beverages. (The chemical industry remove the remaining water using other means, such as hydrophilic chemicals or azeotropic distillation to produce a liquid closer to 100% ethanol alcohol.) 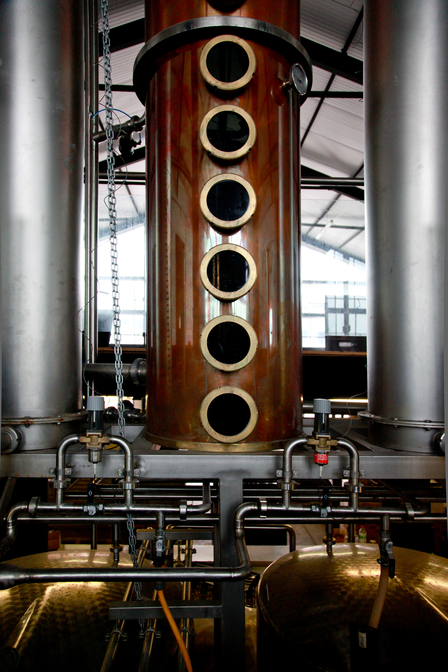 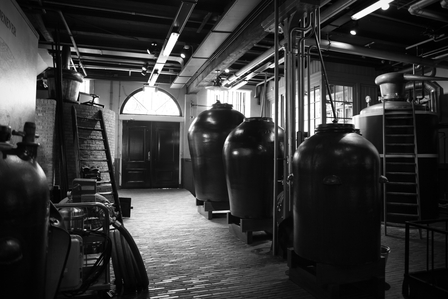