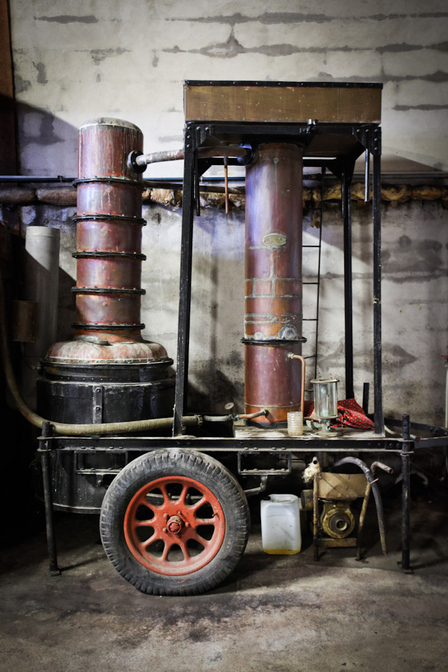 Traditionally Armagnac is distilled from the fermented juice of the Folle Blanche grape (locally known as 'Piquepoul', meaning 'pinch lips'). Today, nine other grape varieties can also be used, but in practice most growers cultivate one or more of just four of the ten grape varieties: Ugni Blanc, Baco 22A, Colombard and Folle Blanche.

The other six grape varieties - Blanquette, Jurançon, Clairette de Gascogne, Plant de Graisse, Maslier Saint-François and Mauzac - are little used, but several growers are beginning to experiment with these forgotten varieties, particularly Graisse, which as the literal translation 'plant of fat' suggests, produces spirit with an oily character.

Folle Blanche is not favoured for young Armagnacs as it really only comes into its own when aged for at least 15 years. With this level of maturity it shows great finesse with characteristic floral aromas and flavours.

The original Armagnac grape variety, Folle Blanche, or 'piquepoul' as it is called in Gascony, was killed-off by phylloxera in 1893 and today represents scarcely 2% of Armagnac's vineyards. Now grafted onto phylloxera-resistant rootstock, its tightly bunched grapes are extremely sensitive to rot. However, for many this grape variety is the essence of Armagnac and is the only grape permitted to be used to make unaged Blanche Armagnac.

The term 'single cepage' means 'single grape variety' and is often used on the labels of Armagnac which are made from only one grape variety.

Known in other parts of the world as Trebbiano, Ugni Blanc is favoured by many producers for blending young Armagnacs. The most important grape in Cognac, but less revered in Armagnac, this late-ripening variety thrives in acidic soils.

Something of an all-rounder producing good young Armagnacs, but also with great aging potential, Baco 22A is a hybrid created by crossing Folle Blanche and the American Noah grape. It is the result of experimentation following the phylloxera plague by Monsieur François Baco, a Landais schoolmaster. Named due to its position in Monsieur Baco's test plot, Baco 22A is suited to the sandy soils of Bas-Armagnac and has a protective tough skin.

Grapes are harvested in October and immediately pressed. Those producers who are large wine producers benefit from modern pneumatic grape press technology but most use traditional screw presses. The juice is fermented and the resulting wine held for distillation. The wines tend to be fairly acidic and low in alcohol. Additives such as sugar or sulphur if it is to be are not permitted during winemaking for Armagnac production.