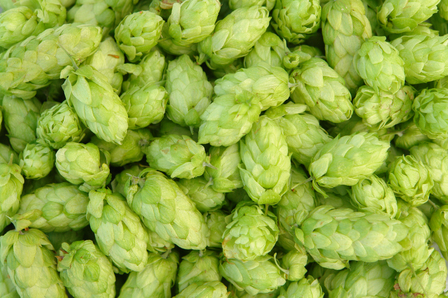 Hops are the female flowers (seed cones or strobiles) of the hop plant, Humulus lupulus. They are used in to add flavour, bitterness and preserve almost all beers brewed today.

The flowers contribute floral, citrus, and herbal aromas. Their bitterness, measured on the International Bitterness Units (IBU) scale balances the sweetness of the malt. And hops have an antibiotic effect and preservative effect, firstly by creating conditions during fermentation which are more favourable to yeast rather than other less desirable microorganisms, and then contributing acidity which acts as a long term preservative. Hops also aid in 'head retention, the length of time the foamy head created by carbonation when poured will last in the glass.

Hops have been commercially grown for beer production for many centuries but commercial breeding to create different varieties started in 1919 by Prof. E.F. Salmon at Wye College in Kent, England when he bred the varieties 'Brewers Gold' and 'Bullion'. There are now over 80 commercially used varieties around the world.

A hybrid hop from a cross between a Petham Golding and a USDA-selected male (63012M), first released May 1985 in Washington State and Idaho. Slightly spicy and very piney.
Alpha acid content: 12 to 14%

The Citra hop is a high alpha acid hop (11-13%) with a strong floral and citrus aroma and flavor with lychee and tropical fruits. Citra is frequently used in American-style pale ales and IPAs.

Widely used by U.S. and English brewers, Crystal hops have low alpha acid (3.5%-5.5%) and a relatively high myrcene oil content. Created in 1983 in Corvallis Oregon Crystal hops are the offspring of the German Hallertau hop and like its parent is spicy and earthy but much more pungent.

A cross of two hop varieties: Simcoe and Nugget, the Mosaic hop variety was released in 2012 and captures the best of these two varieties providing clean bitterness and outstanding flavour and aroma. Mosaic hops are similar to Citra but with an even more intense flavour.

Released in 1982, Nugget is a cross between Brewers Gold and a high alpha acid male. It has a high (9.5%-14%) bitter alpha acid content and relatively low co-humulone oil. High levels of myrcene oil contribute woody tones.

A hybrid Czech 'superhop' variety known by some as 'Super Saaz', created by crossing bitter varieties and aromatic Czech varieties. It has good aroma and higher and balanced bitterness with an unusually low cohumulone content, so contributes little bitterness to a beer's finish. It is a late, high yielding variety.
Alpha acid content: 7.5%

A traditional Czech hop variety used and regarded by brewers around the world. It is an early, low yielding variety.
Aalpha acid content: 3.5 %

Released in 2000, Simcoe is a high alpha acid hop (12-14%) with a relatively low beta acid content (4%-5%) and is commonly used in American-style IPAs. Simcoe is renowned for being aromatic with a fruity and herbal piney earthy fragrance.

A hybrid Czech hop containing genetically around 30% of Saaz hops, but brewing tests have shown that it best used to compliment rather than replace Saaz hops. It is a late, high yield variety.
Alpha acid content: 5 to 6%