"The sources available today as opposed to ten years ago are so much wider," David Wondrich enthuses. "It's amazing how much is out there."

We're discussing the second edition of his classic cocktail history Imbibe, released early in 2015 and replete with mountains of new research – from Jerry Thomas' lost second book and ballooning escapades through to detail on the legendary Willard and other lost titans of the bartending world.

And, to be honest, if you were looking to design the perfect background for a cocktail historian, Wondrich's would be it. He spent his youth torn between the twin poles of academia and rock'n'roll, while drinking more than his fair share of Martinis – or Gibsons, to be precise.

"I dropped out of college to be a musician but after a few years I looked around and realised that if you didn't make it to stardom by the time you were 25, it was very unlikely to happen," he recalls. "And I turned 25 and I wasn't a star, so I started doing other things. I went back to college, I finished my degree, and there weren't really any interesting jobs so I went to graduate school."

In a world where any numpty with an internet connection can dig an allegedly killer nugget out of one database or another and build an entire edifice of theory on that single wobbly fact, and where misinformation runs positively feral in the Google-dominated landscape, Wondrich's academic background is critical to what he does.

For, as the astute reader, hitting a rococo curlicue of a phrase like "the Slings and Juleps that, raised in honor of rosy-fingered dawn, eased men onto the proscenium of day", or noting a Latin farewell to his friend Sasha Petraske on Twitter, might observe, David studied classics. Albeit not a full-on classicist like the don of the Martini, Lowell Edmunds, he credits his academic training – and his labour in the recondite fields of medieval and renaissance studies, Classical Arabic and Latin scientific poetry – with much of his success.

"I was trained to use fragmentary information, because the classics is all fragmentary information," Wondrich explains. "I was trained to harmonise various sources. Probably the best part was learning to evaluate the reliability of sources. And that was extremely useful. I don't trust anybody unless I can confirm their story in some way. Not jumping to conclusions – that's also extremely helpful."

Although his publishers resist footnotes, an essential in academic writing, David treats his writing with the rigour he would an academic paper, and has a solid source for every single fact.

The internet is, of course, a phenomenal tool, with new streams of information coming online every single day. Wondrich has, after some inner struggle, signed up for pretty much every paid-for database out there: he rates Ancestry.com, in particular, for American biographical info. And, whereas ten years ago he'd have spent much of his time scrolling through reams of microfiche and blowing the dust off ledgers, much of his research today happens purely online.

He compares mining the databases to drilling for oil, where you have to work a series of test wells before hitting the gusher you know is down there somewhere. Although he's still not averse to libraries. "Sometimes I just have to go the library – at Tales of the Cocktail I managed to clear an afternoon and spent three hours transcribing articles from ledgers," he says.

Of course, you don't conjure up a picture of Jerry Thomas' milieu as vivid as the one Wondrich paints in Imbibe by Googling "American sporting life" or "John Morrissey" or even by spending an entire evening clicking Wikipedia footnotes. Wondrich's intense immersion in and deep knowledge of Gotham's high-colour history will likely produce a book on New York bars in time.

That may, however, be some time. For the last three years, Wondrich has been engaged in the Herculean task of editing The Oxford Companion to Spirits & Cocktails and he's putting down no estimates as to when the 1200-odd entries will be complete. And, as befits an academic turned OUP editor, both his house and his office are awash with books. How many books, exactly?

"I have no earthly idea," he says, refusing to even venture a linear footage. "I have several hundred volumes on drink, but then I have walls of books on New York history, plus walls of autobiographies, travel books and diaries. I have tonnes of books around navigation, which were useful for the Punch book. And I have other libraries. I have my classics library, my sporting life in America library, my music library. I have a LOT of books."

And, no, Mr Wondrich will not be lending them to you. Not unless you know him pretty darn well. Not that he's obsessed with book as artefact – reprints are fine, and he'll read books in the bathtub, not to mention writing in them in pencil – but he would like to have them back, ta muchly.

The shift from the family tradition of academia to cocktail historian happened gradually. "I was an English professor at St John's University in New York," Wondrich explains. "It was considered a good job. I just hated it. Everybody was telling me what to do. I'd go to a conference and everybody was just being assholes to each other. It seemed like a very narrow life."

While faculty rivalries are legendary, what really turned David off the professorial track was his love of writing. "I knew nobody would ever read what I wrote," he says. "And I'm a VERY slow writer. It takes me forever to write anything. Then after all that work there'll be five people who read your book and four of those will have their own theories and say your book is full of shit."

Then came his lucky break, that pinch-yourself moment in every drinks writer's life when it dawns on you that you can actually get paid to go to bars and drink, even if he anticipated at the time that jazz journalism would bring in the bacon.

"I was the right person at the right time," he recalls. "A friend of mine was working for Hearst magazines, and they had a cocktail book from 1949 they'd had transcribed, and they needed someone to edit it. And he thought of me because he knew I liked cocktails and had some bartending books."

The job was for Esquire, of course, and the month December 1999 – the same month that Sasha Petraske opened Milk & Honey. "Esquire paid me by academic standards incredibly well," he says. "And, coming from a comparative literature background, I looked at all these drinks and immediately sorted them into families and arranged this chaotic lump of stuff into family trees. That's the academic training for sure. I'm always very conscious of how one thing develops into another."

Interestingly – researchers please note – Wondrich hasn't touched said database since 2002, and he professes some embarrassment at quite how many entries have been rendered out-of-date by the deluge of newly digitised information and keen young cocktail geeks.

Still, by 2001, he had quit his academic job and was endeavouring to support his young family on booze writing, an activity that proved quite the challenge for the first couple of years. Yet, as the craft bartending scene has grown, and with it worldwide interest in drink history, so too has his career. "I'm still not getting rich, but I'm doing fine," he says.

We've been talking for a while, through his morning and my evening, and I've benefited from some, umm, trenchant opinions on New York bartenders' attempts at a 70s drink revival – Wondrich, born in 1961, is mystified how anyone could consider the return of disco drinks a good idea, craft ingredients notwithstanding. But there IS one question I'd like to ask.

"If you could have a drink of anything, with anyone who'd ever lived, what would it be and where?" I ask. I must confess, my money's on Jerry Thomas, the larger-than-life character whom Wondrich has done more than anyone to rediscover, and perhaps a brandy punch.

But, no. Ever the polymath, Wondrich responds, quick as a flash: "I'd have a glass of wine with [the Roman poet] Ovid on the coast of Romania where he died in exile. I think he was the wittiest man who ever lived."

A pause for thought. "A bowl of punch with Boswell [the diarist and author who wrote the life of Johnson] would be pretty good too. At James Ashley's London Punch House where he used to hang out a lot." 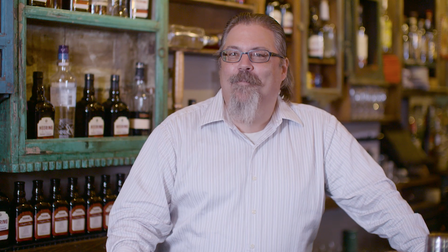