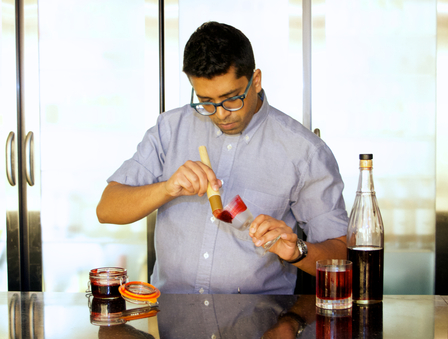 Ryan Chetiyawardana (a.k.a. Mr Lyan), owner of acclaimed Dandelyan, while in Athens judging the Chivas Masters Competition, talked to us about what he loves most: Innovation.

You can only expect the unexpected from someone who started off as a chef, moved on to biology, philosophy and fine arts studies and then decided to get behind a bar. Mr Lyan or Ryan Chetiyawardana, the most well-read of bartenders, opened White Lyan in 2013. His work at Edinburgh’s Bramble bar preceded him and he went on to create one of the most ingenious cocktail lists in the world. A bar without ice, citrus fruit or a shaker in sight, a fact which actively lowers its waste output.

You might think that this concept was born out of a need to show off. When you meet Ryan himself though or attend one of his seminars, you’ll soon realise what he’s all about. He’s a clever man with very diverse interests: the arts, science, biology, ecology all wrapped up in an inquisitive spirit which finds an outlet in bartending. Mr Lyan does like to stand out and he definitely does that with the quality of his work. His list of achievements is endless but suffice to say that in 2015 Tales of the Cocktail named him International Bartender of the Year.

Raised in a family that valued good food and drink, he decided to follow his passion and trained as a chef. Being such a sociable beast though, he found that he missed interaction while stuck in the kitchen so he decided to move behind the bar. It all began when he was studying for his undergraduate and postgraduate degrees at Edinburgh University where he read fine arts, biology and philosophy. It was then he discovered that bartending was the best way to combine his creativity and need to enjoy life.

Q: You named a brand new luxury hotel bar on the Thames, Dandelyan, after a wild flower and you clearly have an interest in plants in general. Where does that stem from?
A: Our inspiration comes from those 18th, 19th and 20th century explorers who travelled the world, discovering new flavours. It’s those people who first introduced things like pineapple, which used to be a very expensive commodity, or chocolate to the UK and that in itself is very exciting.

Q: Why Dandelyan and not Durian, or something more high end.
A: I find humble ingredients just as exciting. Dandelion is a wildflower but it also has pharmaceutical uses. Every part of it, from root to flower has been used in medicine. It’s a great tonic for the liver for example. We basically find all plants fascinating and even the most humble has something that makes it unique.

Q: Culinary trends like those coming out of restaurants like Noma, have already made their way into bartending. Which ones do you find the most interesting?
A: There are things like seasonality, which we can implement and others like foraging for example which despite being something we’re interested in, can’t be implemented due to the amount of produce we would require in the bar. I think sustainable agriculture is very important, especially due to diminishing biodiversity. We find inspiration in every type of plant and that applies to both

White Lyan and Dandelyan. Plants are like living genetic libraries. Every one of those flavour nuances is a challenge for us so we follow developments in cultivation methods very closely.

Q: What else makes you tick?
A: Fun and the way we rediscover it through cocktails. We create fun drinks but with first rate ingredients. We’ve had an 80s revival and the resurgence of ‘disco drinks’ but the ingredients are great and the techniques used wholly different. Innovation is all well and good but making our customers feel welcome is of the utmost importance to us.

Q: Innovation seems to be your favourite word
A: Innovation is my motivation and it can manifest in many ways. It can be something very simple or totally extreme, as it is a reflection of everything around you. You can’t have innovation separate to the world around you; there has to be cause and effect. What do I mean by that? We’re all inspired by our environment and we channel that differently depending on our personal viewpoint.

If your viewpoint is authentic, then it will be innovative in some way. You take time to observe the simplicity of the obvious and look for the missing link. The idea may be so small that it’s barely noticeable or so big that it can change history. Those are the kind of innovations that took place in times of great need, like during wars. Either way, moving forward is essential for us all. Searching for something new is a life goal.

Q: What you’re describing is a philosophy of both life in general and bartending. How did you arrive at this point?
A: It’s always been part of me, it was how I was raised. It was natural for me to focus on what I loved as I grew up with people who inspired me. My parents were very open minded people. They never saw things in a one sided way and my sister was just the same. The way she lived her life and the people she introduced me to had a huge effect on my life.

My philosophy, and I like that you called it that, is my way of doing things differently. I’ve always done that but there are many people who have done amazing things in this world so why copy them? I can find my own way to do things and in fact it’s about more than ‘me’. It’s about us working together, striving towards common goals. It’s all about being true to ourselves and doing what we love. You can tell where I stand by looking at my life’s choices. My life has been a journey in itself: working as a chef, studying biology and getting involved in the arts.

Q: And you’ve found a way to channel all three?
A: If you think about it they all have to do with how you interpret the world around you.

Q: During a speech of yours last year you spoke about tastes and that of umami and fat in particular. Is that something that interests you?
A: Umami is definitely interesting, especially in relation to food. Not sure how easy it is to achieve when it comes to drink but it’s still under investigation. When we make a cocktail our goal is not for it to have a fatty or umami taste. We have a certain result in mind and we try and find a way to achieve it. What we’re after is an emotional result as well but we’re not stuck on certain ingredients. It’s about the research.

Q: Where do you stand on conceptual cocktails?
A: The key element is whether they have an actual reason to exist. You have to interact with your customers and there needs to be a story behind what you create. We shouldn’t just do for the sake of a concept itself.

Q: Apart from not using ice or citrus fruits and the idea of ‘pre-batched’, are there other trends you would like to include in your menu?
A: There are six or seven ideas I’d like to incorporate and I’m already working on some of them. I love food and drink because it’s an area directly linked to culture and that always has a way of moving ahead. You shouldn’t be chasing trends or jumping on bandwagons.

Q: Are you interested in playing with acidity levels?
A: If you use different acidic elements, you’ll get varied results. Citric acid has a very shiny acidity and is very different to something like green apple acid. We usually work with three or four acidic elements and try and find the right balance. We focus on the end result we’re aiming for; Like for example if we want a shiny or intense acidity. There is a cocktail on our list called Brooklyn which is complicated to produce and is the result of a multiple ingredient fermentation, combining two levels of acidity, one dry and one clean.

Q: Is fermentation part of the cocktail making process?
A: At Whistling Shop we had a project with ‘live’ cocktails that had yeast in them. That’s how we get that unique fermentation flavour and the special feeling created by the microorganisms which give those intense notes that you can’t get by just mixing ingredients. We can add flavour or texture depending on the result we want to achieve (complex drinks, floral aromas etc.).

Q: Is it important for you that people understand how much prep goes into a cocktail?
A:Only if they’re really interested. We just want them to enjoy themselves.

Q: Chef and bartenders working together, is that a good idea?
A:Chefs will seek to work with bartenders more and more in the future and that can only be a good thing. There are bartenders that could really open their eyes to a lot of things. Don’t forget I started out in the kitchen too as I loved the interactive culture surrounding food and I wanted to create something for people to enjoy. I guess I still do it to this day by adding certain surprise elements.

Q: What did you particularly like while tasting the cocktails of the competition?
A. I was amazed by the quality of the local vegetables, the aromatic herbs used by the contestants and mastiha.

Q. Thank you
A.Thank you! It wasn’t the usual type of interview so it was just as interesting for me. 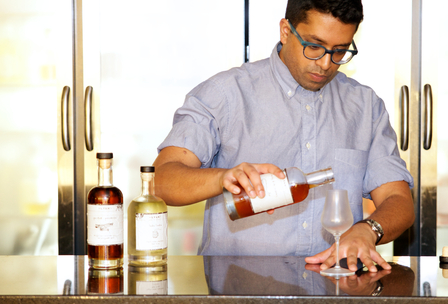