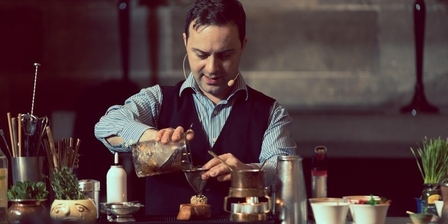 Growing up in the little city of Žilina in the country then called Czechoslovakia, Marian Beke always knew he wanted to work in hospitality. “My father has a wine business in our home town, selling from the cellar and distributing in restaurants and bars,” he says. “Since I was 9 or 10 I was helping him with the snacks and serving wine by the glass.”

But his original idea was to be a sommelier, or follow in his father’s footsteps. Žilina, Slovakia’s third city, has a population of barely 150,000, and Beke didn’t come across cocktail bars until he moved to Bratislava to study hospitality as a teenager.

There were three or four international-style bars in Prague at the time, among them Bugsy’s and Tretter’s, which are still going today, and a trip across the border to the Czech Republic proved eye-opening. “The personalisation for each guest was what fascinated me the most,” Beke recalls. “It was liquid cooking, not just opening a bottle of beer or pouring a glass of wine, but customising the drink.”

Beke’s school didn’t teach bartending, not least because the students were too young, but after graduating he started work at a well-known Bratislava bar, Paparazzi (no relation to the Warsaw Paparazzi).

The training and inspiration worked a little too well. Beke decided on the spot to leave Bratislava, move to London, study English and learn to bartend. With both social media and smartphones in their infancy, no Google Maps and no Ubers, adapting to a new city where he didn’t speak the language – and a city double the population of his entire country – was tougher than it would be today.

“My language school had an internet café and you’d sit there and do your emails,” he recalls. “The first thing you’d do when you came to London, everyone advised, was buy an A to Z [London’s iconic street map]. So you’d take undergrounds, you’d know the tube station, and at the tube station, you’d open the page of the A to Z, and then you’d be walking the streets for half an hour trying to find the place.”

There was at least one familiar face in the big city: Erik Lorincz, now head bartender at the American Bar. “Erik was one year ahead of me, and he’s Slovakian: I knew him because he used to work across the road from me in Bratislava, and he left one year before me,” Beke recalls. “He got me my first job, at a nightclub called Attica: he was already a bartender, but I was a bar back.”

Moving on from Attica, newly acquired language skills in hand, Beke embarked on a learning programme that could hardly have been better calculated. First was Townhouse, the second bar from the team behind LAB, one of the most influential bars of turn-of-the-millennium London, where he learned to work fast, fluidly and with fresh fruit flavours.

Next up came Montgomery Place, a speakeasy then run by Ago Perrone. “That was something different to be doing classic cocktails, from Champagne to Negroni, and I learned Italian hospitality and how to socialise with guests,” Beke says. After three years, Perrone left for the Connaught, while Beke went to Artesian, where he worked alongside Alex Kratena, another émigré from the country formerly known as Czechoslovakia.

After Artesian, the next step was Purl. “That was a learning experience for me because they’d been doing liquid nitrogen and foams – it was nice to play with liquid nitrogen, dry ice, those kind of things,” he says.

And from there came the invitation to set up Nightjar, the much-awarded Shoreditch bar. “I started from zero, literally designing the bar, defining the team and creating the concept,” Beke says. “But after five years I was getting a bit comfortable there: after five years everything works, and you’re just doing a new cocktail menu once a year.”

The prospect, also, of having a family, and of getting old, weighed on him: nobody wants to be working 16-18 hour days with young children, or indeed in old age. The logical next step? To start his own place. And so, three years ago, he found a spot on Old Street and opened Gibson, soft launching from November 2015, and opening formally in early 2016.

The transition from manager to owner was quite the culture shock. “Running a business is not about how good a bartender you are, or how good a cocktail it is – you can make the best cocktail in the world, but it doesn’t mean you’re going to be able to open the bar and operate,” he says. “There could be a million factors that could close your bar, from hygiene to licensing.”

Gibson is already much praised – it entered the World’s 50 Best Bars list at number 6 within weeks of opening – but Beke feels it’s barely hit its stride. “I was figuring it takes three, six, nine months to get the bar started, but now we’ve been open for one and a half years, it will take another six months to fix the social media, the music….” he says. “At a bare minimum, it’s two years.”

His logic is interesting. “It takes really two years to go through the menu and understand the menu, because it’s not about you: it’s about your clientele, what they like, your team, how to work with them, how to choose the right ones, how to fix the mistakes and establish the brand,” he says.

And what does his father, the wine merchant, make of his bar? I ask. Here Beke’s perfectionism glitters, hard as granite. “They’ve never been,” he says. “They know I opened a bar, but I want to fix the bar first. After two years, when I see it’s nice and settled, I’ll bring them in: there’s no point opening and just bringing them in two months later. That would just be stress.”