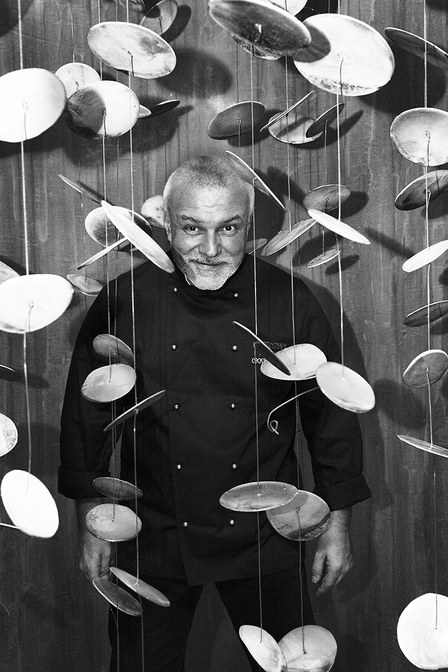 Italy's godfather of molecular mixology, Dario Comini owns and operates Nottingham Forest, the Caribbean-English-Italian hybrid that's a fixture on best bar lists. And, despite the name, he's not a fan of English football.

“Nottingham Forest was actually the name of an old pub in Antigua, which specialised in rum,” Dario explains. Hoping to visit? You're out of luck. The West Indian Nottingham Forest, on Nelson's Bay, was destroyed by a hurricane over 30 years ago.

The Milanese Nottingham Forest has its own chequered history as well. When the Comini family took it over in 1970, it was Bar Monforte, one of Milan's oldest bars, albeit in a new location after a WWII bomb destroyed the original. In 1979, they changed the name to Nottingham Forest, fitted it out in takamaka, a type of evergreen wood that's popular on Antigua, and stocked the bar with 120 different rums by the glass. (Today, they serve a whopping 500 including Nottingham Forest's own blend.)

And, while he rose to prominence after discovering molecular mixology around the turn of the century, Dario Comini has plenty of history of his own, too. A 30-year member of AIBES, Italy's bartending association, he's a third-generation career bartender who treats his art with seriousness and passion.

“Before World War II my grandfather, Giovanni Comini, emigrated to the US, like a lot of Italians of that time,” Dario explains. After a stint as a cowboy in California, Giovanni moved to New York and worked as a bartender in a range of classic venues, including Pete's Tavern, the veteran bar and restaurant that's been serving continuously since 1864.

Back in Italy, Dario's father, Carlo, followed in his father's footsteps, starting work at the Grand Hotel Villa Serbelloni, a classic luxury hotel in Bellagio on Lake Como, an hour or two north of the family home in Milan. From there, he moved to the city, where, Dario recalls, he opened about 30 different bars.

“As a child I was always poking around in my father's business,” Dario recalls. “I learned to make coffee when I was eight. I used to stand on a box of beer so I could reach the espresso machine.”

Dario cites Carlo's advice, particularly as regards psychology and customer management, as fundamental to everything he does today. Yet another inspiration came when a customer asked him to prepare a round of aperitivi when he was just twelve years old. (Attitudes to children in bars, always fairly relaxed in Italy, were positively horizontal in the 60s.)

“I had heard of a cocktail named Negroni, which was prepared with equal quantities of three spirits, but as soon as I started to pour the gin I couldn't remember the other two,” he recalls. “I was desperate because the customer and three guests were waiting. An elderly waiter was drinking at the bar, and asked the name of the cocktail. When I told him, he magically gave me the complete recipe. From that day, I began to study, and every day of my life since then I have not stopped learning.”

Carlo pushed Dario to work outside of the family structure to build his knowledge and experience, and he landed a gig with the controversial Milanese media tycoon, and later prime minister, Silvio Berlusconi. “I was lucky enough to work for Mr. Berlusconi as his personal barman,” Dario recalls. “I served at private receptions at his villa in Arcore, and managed the bar at his TV station Canale 5. It put me in touch with the world of the jet-set at that time.”

If he has any colourful tales of bunga-bunga parties, Dario is far too discreet to share them. After his time with Berlusconi was up, he returned to Nottingham Forest, yet took regular sabbaticals to work around the world. “I've worked in places from New York to the Far East, but always undercover, to experience and learn new ingredients and techniques,” he says.

It was during one of these internships in Spain, around the year 2000, that Dario discovered molecular techniques and asked a cook to show him. “I was already using a lot of culinary techniques, ingredients and equipment – rosemary, sage, tomatoes, thyme, oregano, consommé and broths, reductions and liqueurs, pots and filters – that were not normally used in cocktails,” Dario says. “It was a natural step to add molecular techniques to these.”

Although Dario is regularly described as a chemist, or as coming from a family of chemists, he has no formal training in chemistry beyond high school. As a studious-minded child, his single favourite game was playing with his chemistry set, but this didn't really prepare him for using chemicals to produce avant-garde drinks.

“When I discovered spherification, and became interested in molecular cuisine, the greatest difficulty was the availability of chemicals,” he recalls. “Luckily a friend of mine, Simonetta Barbaini, had a degree in molecular chemistry and ran a pharmacy. I hired her as a consultant and we began a collaboration that continues to this day.”

With Barbaini's help, Dario can not only acquire ingredients, equipment, glassware and the necessary certifications, but work with sometimes dangerous chemicals and kit without risk to his staff or his guests. “We have everything a modern laboratory could desire,” he says. “Classic and cavitation sous-vide baths, ultrasonic, magnetic and gravitational mixers, vacuum bells and vacuum stills...”

Yet he wears all this kit, and all his learning, lightly. “I don't like to put the equipment on display to our customers,” he says. “A bar should never lose the image of the warm welcome that makes our guests feel at home. We should use the best possible techniques, but make it appear as simple as possible, not tire our guests with boring ceremonies that may distract them from their ultimate goal, to relax and enjoy.”

In fact, Dario does not like to be defined as a molecular bartender. “I think a mixologist should have a complete training, with no restrictions, but also adopt the techniques and ingredients that can please our guests,” he says.

Dario travels extensively, all around the world, and puts his natural curiosity to work exploring new flavours. “I try everything from insects to Chinese medicine made from snakes,” he says. “The inspiration for a new drink comes from these trips, then I brainstorm with my staff, and we decide the outline recipe. From there, we test for about six months to reach the optimal balance before we put it on the menu.”

Recently, the Nottingham team have been experimenting with cocktails using surprising natural ingredients, especially flowers, buds and leaves. Dario uses the flower of the curare plant, one of a range of plants used by indigenous South American peoples to make paralyzing poisons for their arrows, for its anaesthetic effect on the taste buds, and Sichuan pepper for the tingling sensation it produces. He's also a fan of oysterleaf, which smells of oyster, and “cheese leaf”, whose leaves taste of mature cheese.

Besides his flagship venue, Dario keeps busy. He has a second bar, I Gazebo Nottingham, in Parma, the cultured, foodie little city an hour and a half south of Milan, which his wife Frances, also a longtime bartender, manages. He runs Bartender.it with Dom Costa, Luca Pirola, Ago Perrone and Simone Caporale, consulting for companies, creating bartending events and working on bar shows. And he's published four books, including I Cocktail del Nottingham Forest (The Cocktails of Nottingham Forest), published in in both Italian and English.

Dario has created hundreds of drinks over his decades-long career. Yet his single favourite creation is the Mondrian Martini, named for the yellow, blue, red and black alginate bubbles within it: these are the four colours Piet Mondrian used in his iconic grid-based abstract paintings.

“It's a classic gin martini cocktail with four different spherified liquors (absinthe, Zafferano, bitters and amaro Lucano),” Dario explains. “You can taste the bubbles with the spoon supplied, alternating a sip of the cocktail with the liquid from the bubble bursting directly into the mouth. By changing the sequence of tasting, you'll have a different perception of each taste.”

We're not entirely sure Dario's grandfather would have recognised some of the creations on offer in Nottingham Forest. Yet we're sure he'd have appreciated the old school Italian hospitality this quiet, unassuming chap serves up. 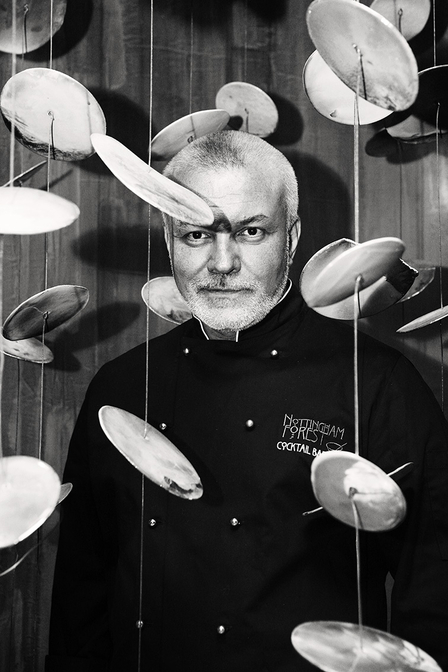 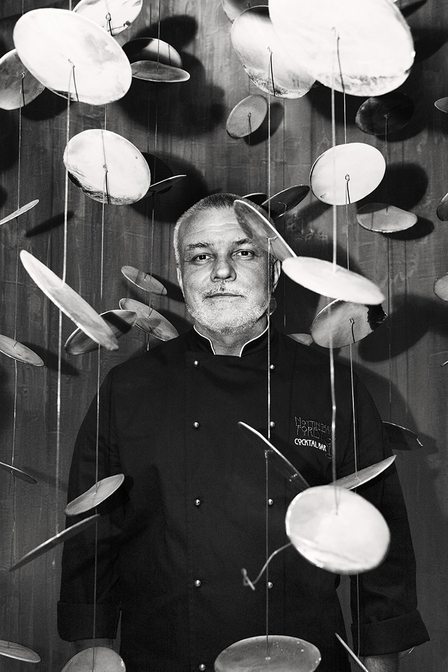 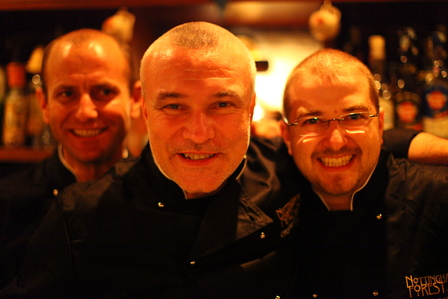