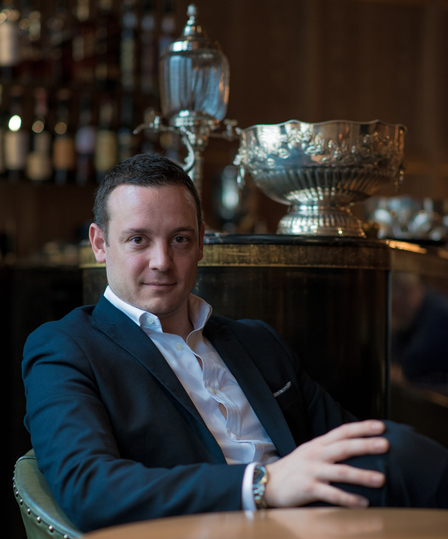 “Our biggest punch bowl will serve 100. It’s huge. We’ve used it once in these four years,” says Davide Segat, bar manager of The Punch Room at The London EDITION hotel, which launched only their second menu since 2013 this week.[April 2017]

Despite his surname, Davide is actually Italian. Since arriving in London in 2003 he’s worked in venues including the iconic Connaught hotel, with Brian Silva, and Green & Red, Dre Masso and Henry Besant’s groundbreaking tequila bar. It was at Hawksmoor, the steaks-to-cocktails venue that scooped Best International Restaurant Bar at Tales of the Cocktail 2016, that he started playing around with punch and met veteran bar consultant Nick Strangeway. When Strangeway’s consultancy Strange Hill opened the bar for The EDITION in 2013, he brought Segat in as manager.

It might have the aura of a Victorian gentleman’s club, but the Punch Room was originally conceived as an honesty bar. The choice to lead with punch was a marriage of necessity – the bar simply didn’t have enough stations to do a classic cocktail bar – and serendipity. “We talked about Nick’s dream of doing a punch room back in 2006,” says Segat. “Because EDITIONs are going to open all over the world, we wanted a drink that was true to the British heritage of this building and punch was a perfect example.”

The wood-panelled room with its flickering fire and leather armchairs already had a lot of the look and feel Segat and Strangeway wanted in a punch room. “We just had to add a lot of punch bowls and keep the room really dark,” says Segat.

While David Wondrich’s 2010 book, Punch: the Delights (and Dangers) of the Flowing Bowl, might have made bartenders around the world aware of the glories of punch, a punch room is still a bit of a hard sell to the typical consumer. “People look at punch like when they were 17 years old and they threw in everything and it was disgusting,” says Segat. “We have a punch of the day that we give as a welcome drink when people arrive and that prepares the palate, makes them aware that punch has moved on.” Because not everyone who comes to the bar wants to share a bowl, all punches are on offer as single serves, and the smallest bowl serves just two people.

Segat sees the appeal of punch as its social quality: “It’s lighter, more forgiving, you can drink a bigger portion of it for longer.” But, as everyone who’s ever botched a godawful bucket of juice for a teenage party knows, punch presents its own very specific challenges to a bartender.

“A cocktail is designed to be drunk straight away, it’s a sprinter,” Segat says. “The punch is more of a long-distance runner. There’s ice, there’s evolution, there’s temperature change. It needs to be something that evolves, and that’s what makes it moreish, because you want to see how it tastes as it changes.”

Segat relies on four main tomes to create his recipes: there are 30 on the new menu. Besides Wondrich, the ne plus ultra of punch, he uses William Schmidt’s The Flowing Bowl: When and What to Drink, and the 1862 and 1876 editions of Jerry Thomas’ book. Yet sourcing an original recipe and interpreting the arcane measures used is only a very small part of the journey. [links to read books online]

“It’s very hard to find original products,” he says. “If you look at an old product like arrack even that’s improved massively over the years. Then, when you use lemon juice you never know if they meant lemon or lime, because they called both lemon. The names of the wines are all different – all imported wines were called things like clarets. So you need to find the clues to the ingredients and then balance to the modern palate.”

That isn’t an easy balancing act. Seventeenth-century recipes, tailored to be served room temperature or warm, focused on disguising the edge of rough spirits, usually with hefty doses of the spices then more easily available thanks to the age of exploration. Cultural fondness for sweetness and sourness evolves over time and geography, as does the ease of access to what are now everyday ingredients like fresh citrus and refined sugar.

The current menu draws on recipes as far back as the 1600s and as up to date as the 21st century and slots them into six sections. The first five – spirit, citrus, sugar, spice and water – mimic the five key ingredients that may have led to punch getting its name from the Hindi word for five. The last, entitled Curiouser and Curiouser, includes a Milk Punch, based on milk that curdles, and edibles.

The water section, however, majors on tea, not water. Segat worked with Henrietta Lovell of the Rare Tea Company to find the perfect blend on which to base each drink, be it silver-tip jasmine tea or English peppermint tea. “Water became an ingredient in punch because you needed to neaten down the spirit,” he says. “But if you flavour that water you can play with an almost unlimited amount of flavours, from rose petal to black tea or white tea.”

Traditional and non-traditional spirits sit side by side – a mescal with an aqua vitae, a tequila alongside genever. Yet there’s also some seriously crazy ingredients, notably ambergris, a substance produced within the intestines of a sperm whale and as valued by perfumers in its day as musk. Despite its revolting origins, it featured in a surprising number of punch recipes.

“It’s prohibited to buy ambergris today, and we wouldn’t want to use the real thing anyway because whales get hunted for that,” says Segat. “So Bristol Botanicals recreated the flavour of ambergris for us synthetically and gave us basically a perfume oil.”

It is, like anything involved in translating punch to the modern era, a balancing act. The results are so staggeringly aromatic that just five drops diluted into a bottle of vodka can add the requisite grace notes to a punch. Like the rose tea, mace and aqua vitae that star in Segat’s bolleponge, it’s an ancient ingredient turned strikingly modern – very much like punch itself, in fact.

POUR all ingredients into ice-filled bowl and stir.

To make the lemon sherbet, rest lemon zest in sugar for 24 hours to release the oils. Then melt the sugar with lemon juice to create a syrup of sugar, lemon juice and lemon oil. For the ambergris infusion, add five drops of Bristol Botanicals’ synthetic ambergris to a bottle of vodka. 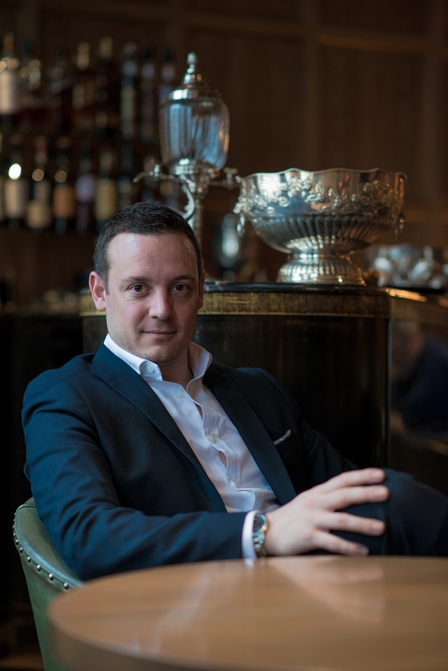