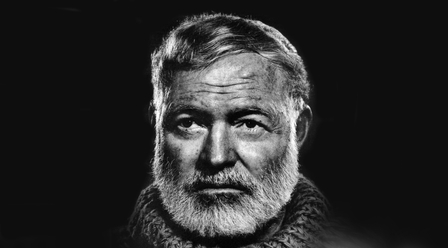 So who was Ernest Hemingway?
You really have to ask? Nobel-prize-winning author, journalist, war reporter, big game hunter, bullfighter, deep sea fisherman and all-round man of action, Hemingway packed more into a year than most of us manage in a lifetime. He lived in Chicago, Toronto, Paris and Havana, and traveled the world, but also loved the quiet of places such as Key West, Florida, and Ketchum, Idaho.

What did he drink?
Hemingway is most often associated with the giant, sour, frozen daiquiri known as the Papa Doble, which he drank at La Floridita in Havana - he once consumed 16 in an evening. He remarked that one "felt as you drank them, the way downhill glacier skiing feels running through powder snow". Yet his tastes were actually straight down the line. Hemingway liked his Martinis dry - 15:1 to be precise - and his Bloody Mary made to the classical proportions of 2:1. A fan of absinthe, he wrote to a friend "Got tight on absinthe last night. Did knife tricks," - and his major contribution to the cocktail world was the potent blend of absinthe and champagne known as Death in the Afternoon.

Where did he drink?
Sloppy Joe's Saloon (now Captain Tony's Saloon) was his local during his days in Key West; in Ketchum, he was a regular at the Olympic Bar. During his time in Paris, he frequented Les Deux Magots, Café de Flore, the Dingo Bar and Harry's New York Bar among others. In Cuba, his local was, of course, La Floridita, while in Madrid he favoured Museo Chicote. While travelling, Hemingway made a point of visiting most of the world's best bars: the American Bar at The Savoy, the bar at The Dorchester, the Long Bar at Raffles, Singapore, and many more. He described Harry's Bar, Venice, as "almost a sacred place for those of us who know it". 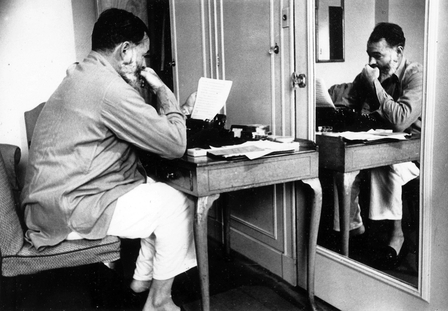 How did drinking change his life?
Hemingway drank heavily for much of his life, and even more heavily after a disastrous safari, including a plane crash, left him in almost constant pain. (His son, Patrick, whom he introduced to booze aged twelve, would also suffer drink problems as an adult.) Although warned off booze by doctors as early as 1937, by the 1950s, he was starting the morning with Chianti, and progressing through quantities of alcohol. He was hospitalized twice for depression before he shot himself.

Any famous drinking buddies?
Plenty! During the 20s in Paris, Hemingway drank with the cream of the era's writing and artistic talent F. Scott Fitzgerald, James Joyce, Ezra Pound, W. B. Yeats, Pablo Picasso, Joan Miró and many more: Joyce, a pugnacious but small man, would endeavour to start fights for Hemingway to finish. Later in life, many of his close relationships were with men who shared his passion for fishing and the outdoor life. 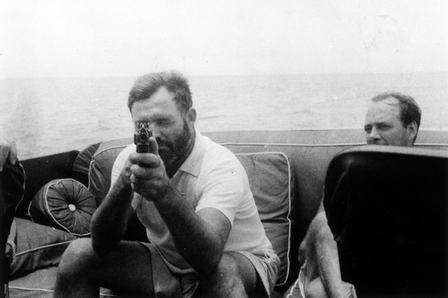 Any drinking stories?
"Always do sober what you said you'd do drunk," Hemingway once wrote. "That will teach you to keep your mouth shut." He claimed to have liberated the Paris Ritz, which was the headquarters of the Nazis during their occupation, with a posse of American irregulars. Although soldiers had been through first, he definitely made his mark on the bar, celebrating with as much as three bottles of champagne, and the Ritz duly named the Hemingway Bar in his honour.