“The Only William” Schmidt 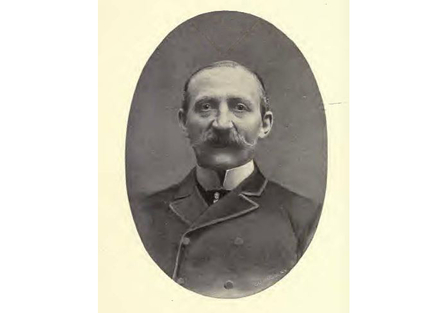 Originally from: Hamburg, Germany
Profession: Bartender and author
At: Chicago and New York

A bartender, wrote “The Only William” in the ponderous introduction to his 1896 Bartender's Guide, must be “a man of original ideas”, “a keen observer” and a hard worker. Yet there was more to it than this. For William, drinking was an art, and the true bartender was an artist behind the bar.

William Schmidt was one of the first celebrity bartenders, and a regular in the New York papers at a time when the first seeds of Prohibition were already sprouting. He had been tending bar for almost 30 years when he published his first book, The Flowing Bowl, complete with erudite sources in English, German and Latin, to glowing reviews.

By his own account, William was born into money, which disappeared, and started work as a bartender while only a boy. A solemn-looking chap, with a world-class moustache, he had an eye for publicity and theatre.

Schmidt led a team of bartenders to open Chicago's Tivoli Gardens in 1873, throwing streams of blazing drinks behind the bar with a style worthy of his contemporary Jerry Thomas. Later, when his bar was not too busy, he liked nothing more than to build pyramids of glasses and decorate them with fruits and flowers.

By 1884, William had come to New York, acquired his sobriquet “The Only William” - not least, perhaps, because there were other William Schmidts operating saloons in New York City - and taken up residence at a saloon near Brooklyn Bridge.

After returning to Hamburg to visit his elderly parents, Schmidt went independent, opening on Broadway. His business partner died soon after, and Schmidt stayed on as bartender and employee rather than co-owner. The saloon would later move to Dey Street, now Ground Zero.

Strangely for a man who wrote two books, many of Schmidt's myriad creations have been lost. He seemed to spin out elaborate, high-camp drinks with inventive, often-florid names in a matter of seconds. He honoured occasions from a battle between Japanese and Russian forces to the arrival of an around-the-world sailor, and introduced them to passing journalists. One newspaper account, perhaps a little tongue-in-cheek, has him dashing into someone else's tavern on his way home from work, and mixing up a new drink behind their bar to capture his inspiration.

Yet Schmidt's work was not all about the grandiose and complex. A range of Christmas creations for the home, beginning with that long-lost item, the “early morning drink”, have an elegant simplicity. A Siesta is simply equal parts of claret, sherry and cognac, with sugar and hot water to taste. (The early morning drink contains vermouth, sherry, port and orange bitters.) Obituarists praised his way with the great and simple classics of the cocktail's Golden Age – not to mention his light hand with a hair of the dog. 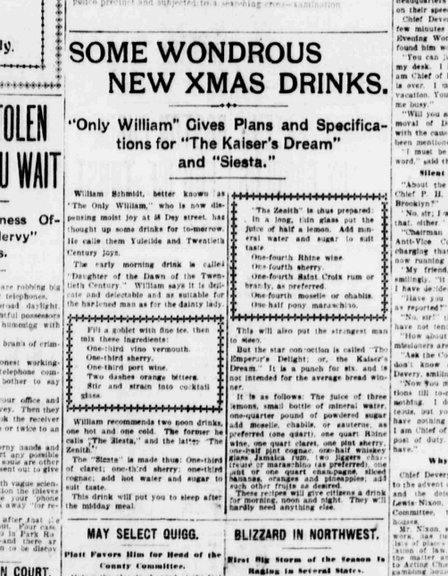 Schmidt was a remarkable man, whose personality and people skills inspired an impressive loyalty. He seems not to have married or had children, and it's intriguing to speculate that, a century before Stonewall, he may have been gay. (One of his obituaries suggests he may have been an atheist.)

William was still creating new drinks in May 1904. Yet it seems that, by October, he was already showing symptoms of rapid-onset dementia, perhaps triggered by one or more strokes. His partner-employer duly forced him out of the business in which he was centre-stage. Within three months, Schmidt died of dementia in the grim surroundings of a Manhattan state hospital.

A local New York paper, The World produced a glowing obituary, recalling, “He had the soul of a poet... His drinks were creations. In his nimble fingers and his fervid heart there dwelt the genius of one of the earth’s eccentric benefactors.” The journalist noted sadly that there was no family in the US to claim his body.

Yet Schmidt had made his own family: the family of the saloon. Within two days, a group of friends and regulars had read the news, called the hospital, raised the funds and prepared him a funeral. Unlike Harry Craddock, The Only William would not be buried in a pauper's grave.

The eulogy quoted Schmidt's own words in his memory. “A man in my profession should never forget that he is a gentleman. However well-mixed a drink is, much of the flavor will be lost unless politeness is added. A true artist should infuse courtesy and quality into all his liquid pictures.” And it seems that's exactly what Schmidt did. 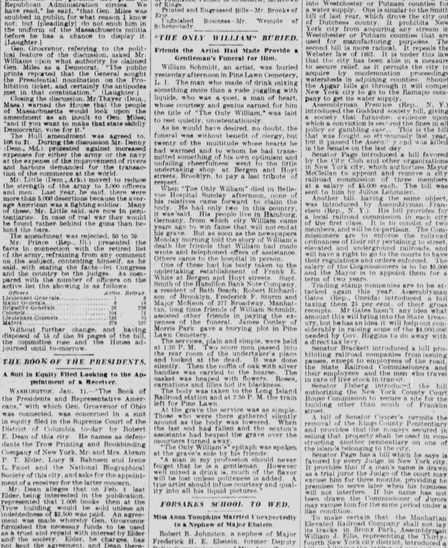