Firewater - or water of life? 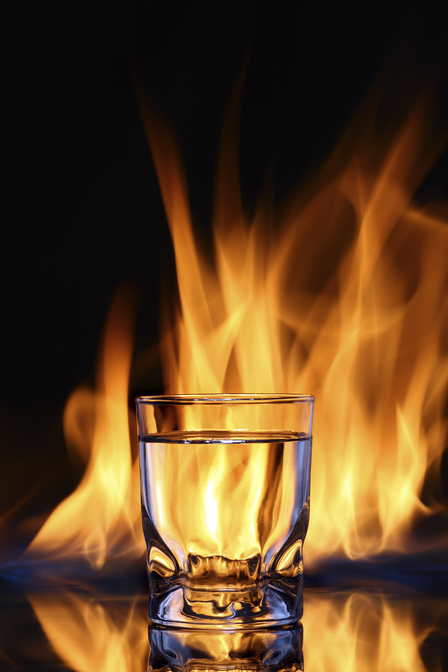 The exact meaning of the word 'aguardiente' is shrouded in more than a little mystery - at least when it comes to spirits marketing. A range of online sources - and even a few print books - suggest that it means, like eau-de-vie, 'water of life'.

The venerable Oxford English Dictionary, however, smacks that one out of the ballpark. It defines aguardiente as "a distilled liquor resembling brandy, especially as made in South America from sugar cane." And it gives the origin as: "from Spanish, from agua 'water' + ardiente 'fiery'".

You're not wrong. Both 'aguardiente' and its Portuguese equivalent, 'aguardente', descend almost directly from the Latin aqua ardens (burning water). Or, as we say in English, 'firewater'.

And it's very possible that spirits marketers - at least in the years before their lawyers stopped them - have been weaselling around this topic for many, many decades.

Here's the Reverend Abram Smythe Palmer, doctor of divinity, on the subject in 1882. "AGUARDIENTE, a Spanish word for brandy, is often misunderstood to be derived from diente, a tooth, as if it meant "toothsome water," a "dainty drink"."

How COULD that misunderstanding possibly have come about?

Yet the word 'firewater' has a venerable history. During the 1300s Arnaldus de Villanova used the term aqua ardens (burning water), as well as the more marketing-friendly aqua vitae (water of life), to describe the distillates he and his fellow alchemists produced. Which makes a lot of sense, since he got them - well, by heating liquids, right?

The word 'brandy' seems to have fallen out of fashion - probably because of its twin associations with ropy, old-school fruit liqueurs and something pensioners cook with at Christmas. But that too, originally, meant 'firewater'.

'Brandy' appeared in English in the middle of the 1600s, as a shortening of the older words brandwine and brandewine. These derive in their turn from a Dutch word brandewijn (it's probably no coincidence, since JRR Tolkien was a Professor of Anglo-Saxon and loved his etymology, that the Hobbits call their river Brandywine).

And where did brandewijn come from? From branden (burn) and wijn (wine).

Yet branden also means 'distil'. And it's at least arguable that the ardiente in aguardiente, and, for that matter, the ardens in aqua ardens, refers to the fire that burned under the still, rather than the undeniable fire the earliest aguardientes created on the palate - and that many, once you get out into the countryside, still do.