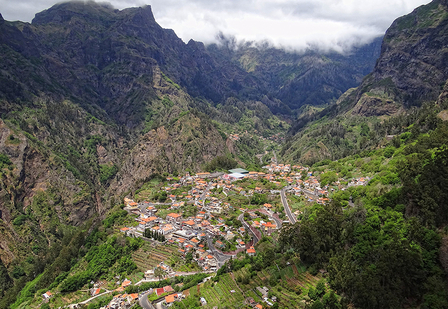 Madeira is a fortified wine from the semi-tropical island of the same name in the Atlantic, 600km off the coast of Morocco.

Colonised by the Portuguese in 1420, the island of Madeira is named after the Portuguese for 'wooded isle', a reference to its once dense forestation. The island is only 57km (35 miles) long, from east to west, and 23km (14 miles) from north to south, and is divided into two halves by a mountain range that forms its backbone.

Until the opening of the Suez Canal, Madeira enjoyed a strategic position on the Atlantic shipping lanes and during the 17th and 18th centuries Madeira was a standard port of call for ships to pick up supplies for ships heading to the New World or East Indies. In order to help preserve the island's wine for long voyages, neutral grape spirits were added. On-board ship, the wine slowly warmed during the voyage through the tropics, concentrating the flavour and developing a mellow, baked flavour. This unusual, richly flavoured wine became popular in its own right leading to the effect of the warm ships' holds being replicated on the island using a heating process called 'estufagem'. 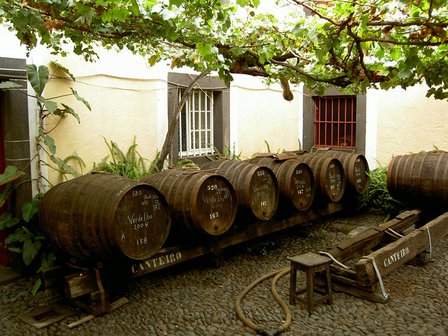 Apart from those selected for 'vintage' or 'colheita' bottling, almost all madeiras are blends and winemakers use their experience to achieve a blend to match their house style.

There are four predominant styles of madeira available, each with a different level of sweetness. They are named after the principle noble grape varieties grown on the island
• Sercial (dry)
• Verdelho (medium dry and traditionally referred to as 'Rainwater')
• Bual (medium sweet)
• Malmsey (sweet)

While all styles of madeira go well with dried fruit, certain styles are better accompaniments to particular foods than others.

Verdelho/Rainwater (medium dry)
Soft and sweet, honeyed, often with smoky hints, this can be drunk as an aperitif or a digestif. Verdelho is excellent served with paté, foie gras, starters with mayonnaise, some Indian foods and dry cheeses. In the USA, medium dry madeira is popular and traditionally referred to as 'rainwater' while verdelho's market share in Britain is only 1%. Wines labelled as rainwater are generally made from Tinta Negra Mole grapes.

Malmsey (sweet)
This sweet (or as the madeira shippers would prefer, 'rich') dessert wine is a soft, honeyed, fragrant after-dinner drink that goes with most desserts and chocolate. The term 'malmsey' is an Anglicisation of the Portuguese 'malvasia'. This style has been popular in Britain for several centuries and a large percentage of the madeira sold in the UK is malmsey. 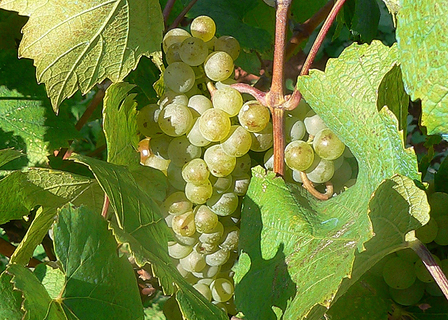 Colheitas (from single year)
Wines from a single good year which can be made from a single grape variety or a blend of several. Wines labelled as colheita (meaning harvest) must have spent a minimum of five years ageing in oak casks.

Reserve madeiras (5+ years)
Wines labelled with the name of one of the noble grape varieties (sercial, verdelho, bual or malmsey) must be aged a minimum of five years.

Special reserve madeiras (10+ years)
Wines labelled with the name of one of the noble grape varieties (sercial, verdelho, bual or malmsey) must be aged a minimum of ten years.

Exceptional reserve madeiras (15+ years)
Wines labelled with the name of one of the noble grape varieties (sercial, verdelho, bual or malmsey) must be aged a minimum of 15 years. These are rarely sold as producers usually holding such old wines until 20 years old when they can be sold as vintage madeira.

Vintage (frasquiera) madeiras (20+ years)
Only made from a single grape variety (sercial, verdelho, bual or malmsey), vintage madeiras must remain in the cask for a minimum of 20 years, after which they typically spend two further years in the bottle prior to sale.

Solera Madeira (no longer produced)
Made using an ageing method similar to that of sherry and is no longer made, although some rare old examples can still be found.

The smell of madeira is something like a cross between a highly concentrated curry and wood varnish. The curry notes are on a par with Brick Lane's best and the varnish is that nice-smelling stuff found in boat yards.

Madeira has bags of rich and concentrated flavours. Common flavours include resinous notes, often described as being like pinewood or eucalyptus, with phenols from the wood, typically showing vanilla and turpentine.

The finish of madeira is always fresh and clean - even on the sweeter styles, due to the high acidity of the wines (a consequence of the vines growing in the volcanic soil).

How is madeira made?

The principle grape varieties used to make madeira are Malmsey (traditionally known as Malvasia), Bual, Verdelho, Sercial (all white grapes) with Tinta Negra Mole and the less common (and less tannic) Complexa the only red varieties. 90% of all Madeira is now made from Tinta Negra Mole, which has a thin skin, so soft to touch, hence the term 'mole', which means 'soft'.

Better quality madeira is usually made from a single grape variety (one of the four 'noble grapes', rather than Tinta Negra). The grape variety from which it originated will be declared on the label, along with an indication of the style. Other less common grape varieties include Terrantez and Bastardo - both now rare and hard-to-find wines.

Madeira's geography is very mountainous and vines are grown on terraced plots carved into the hillside called 'poios'. The variety of grape grown on each plot is selected to best suit the climatic conditions and altitude of a particular area. As a rule, vineyards on the northern side of the island produce drier wines, while the southern warmer side produces sweeter, more full-bodied wines. Grapes are handpicked from mid-August through to early October from thousands of smallholdings scattered throughout the island. 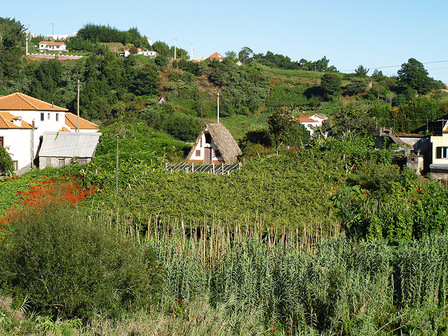 As with most wines, the grapes are first crushed, allowing the natural yeasts on the skins to start fermentation of grapes' sugars into alcohol. Originally, teams of workers would tread grapes in granite or wooden troughs called 'lagares'. This process has been replaced by modern, stainless steel autovinification tanks.

Fermentation lasts for 24-48 hours. Depending on how dry or sweet the final wine is to be, fermentation is stopped before it has completed, thus leaving natural grape sugars in the wine. For example, Bual ferments until approximately half the sugars have been converted to alcohol, while Sercial is allowed to ferment until completely dry. Fermentation is stopped by the addition of grape brandy (at 96% alc./vol.), which kills the yeasts and fortifies the wine.

The fortified wine is then put into oak casks or large vats for ageing in special warehouses where it is heated to a temperature of 40-45°C for 3-4 months. This process, known as 'estufagem', is said to mimic conditions in the holds of ships in tropical climates. Estufagem is unique to Madeira and gives it its distinctive character. 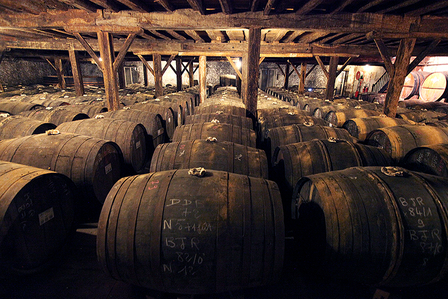 Traditionally, estufagem took place in large lofts called 'canteiros', which were designed to soak up the island's strong sunlight. It now more usually takes place in lodges called 'estufas', which use the circulation of hot water to heat the wines. Madeira termed 'canteiro' are aged only in the cask and do not undergo artificial heating. After estufagem, the wine continues to mature in conventional, relatively cool warehousing.

Madeira's age is counted from when the estufagem is completed. The fortified wine starts its ageing process at around 17% alc./vol., but as it ages it loses water due to evaporation, meaning that the relative alcohol content increases, as does the concentration of flavours in the wine. Some well-aged vintage madeira can be over 20% alc./vol. with very concentrated flavours.

All madeiras are aged in wood and are normally bottled ready for sale when 3, 5, 10, 15 or 20 years old, depending on their inherent quality and ageing potential. The finest madeiras will become vintages and are made from the best wines of an excellent year. (In the UK three year old madeira accounts for the majority of all madeira sales. Only a very small percentage of madeira sold in the UK is ten years old or more.)