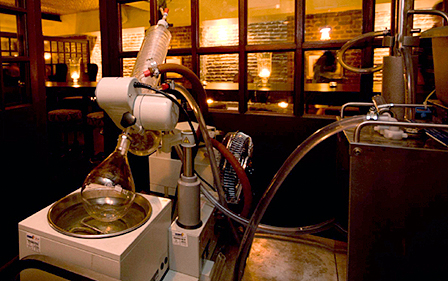 There's been a lot of attention focused on rotary evaporators among the bartending fraternity over the past few years - at least the more experimental end of it.

Once the preserve of white-coated technicians in 'proper' labs, they seem to have made their way into bartenders' attics, cellars and garden sheds. I remember trying to get my hands on one for food use while at university and being quickly and quietly ushered away.

There's good reason why they became very attractive to the food world, and it revolves around one simple factor: heat. The movement among leading chefs and bartenders has been to use higher quality ingredients that bring increasingly unique and interesting flavours to play. However, most ways of processing these lead to heat damage that results in the loss of delicate, nuanced flavours that make the ingredient attractive in the first place.

Distillation has long been known as an efficient method of preservation and extraction of flavour, and alcohol lends itself wonderfully not only in its ability to carry flavour, but in the ease in which you can separate it out from a solution. And more importantly, it's suitability for consumption.

When I was first working with low temperature distillations, I became mesmerised by the wonderful new ingredients that suddenly became available to my botanical repertoire. Previously, flowers and other delicate materials would have been hard to process using traditional methods of extraction, which would destroy the flavour. If they were simply steeped or macerated in alcohol, the delicate floral elements would fade, and if they were simply added to a drink, they would be swamped and flattened. Low pressure, low temperature distillation countered this and a whole host of delicate materials befell a different fate. Flowers, peels, woods, seeds, shells... all of these and more could be steeped in alcohol, miraculously 'boiled' at low temperature and the resulting distillate articulated a stable, powerful heart of the original botanical, ready to be easily used in a drink.

However, after many experiments, it was apparent that there were limitations to what could be achieved by low temperature distillation. Firstly, it always confused me how a liquid could 'boil', without actually boiling? The principle is actually simple - that surrounding environmental pressure affects the boiling point of a substance. This varies in relation to elevation from sea level. Standard Boiling Point is merely the temperature at which a liquid boils at the pressure of 1 bar. Under this principle, boiling points can be manipulated using equipment such as a rotary evaporator: by altering the pressure within a closed system (the still), the boiling point of a substance within this system is also altered.

A rotary evaporator does this by applying a vacuum via a powerful pump, then introducing a heat source to the system to boil the solution. This means that alcohol can be manipulated from its standard boiling point of ~78C to easily below the 30C mark. This was great for delicate herbs, flower and spices, but sometimes I found myself wanting the opposite of this effect - yearning for a richer flavour. So I inverted the principle.

One of the main culprits for this thinking was black pepper. I've always found it a very complex spice and found notes ranging from red berries all the way through to wood, tobacco and coffee. When run through a low pressure distillation, the delicate floral notes shine through. On trying pot still distillations, this yields some of the spice, but it wasn't until I ran a high pressure distillation that I finally achieved the wonderfully fragrant, oily and earthy distillate I wanted.

The principle was simple - use the higher temperatures to take the distillate beyond its natural parameters, utilise all the processes associated with high heat exchange and pull the richer notes from within the botanicals. It's a reflection of the way we use higher proof spirit to extract 'darker' notes from bittering botanicals when making bitters - the higher temperatures pull out the darker notes. In particular, I noticed from my early experiments that a much oilier distillate was achieved - especially when compared with standard and low temperature distillations.

In practice, the botanicals and liquid are placed in a sealed container that does not permit the escape of air or steam. As the material is heated, steam is created, and as this is contained within a closed environment, it causes the pressure to rise. The rising pressure, to around 20psi, increases the boiling point to around 130C. When it reaches this, a regulator is switched, which allows the vapours to escape and rise and pass through a condenser. The distillate is then cooled and collected.

The particular distillate I had been employing in the bar at Worship Street Whistling Shop, using a still I built myself, was a distillation of black pepper, coriander seed and sarsaparilla. This is distilled at 130C, and the resulting distillate is mixed with Belvedere Vodka and Gancia Bianco Vermouth in our 'Exploded Vodka Martini'. Thankfully, the proof is in the pudding, and the flavour and texture is very different to anything else I have experienced - a sentiment that has been echoed by most who have tasted it too.

Similar experiments with different botanicals have yielded similarly odd-ball results. A high pressure tea distillate was entirely different to that of a low pressure distillation, and also to that of a hot steep and a cold steep, and produced a very different mouth-feel.

We were in talks with a few different Universities, and even a discussion as to whether we could participate as part of a PhD project over the technique in what has been affectionately dubbed our 'Kaboom Still'. But thankfully, the technique delivers on flavour rather than merely on concept.

This gave us a series of methods that we were able to employ for creating the ingredients at the Whistling Shop. One of our drinks used to call for a 'Preservation Liqueur'. This was an ultra-seasonal liqueur that we made in-house and changed as and when it was required - be it daily or weekly. We made small batches and it changed when the previous one was exhausted. There we utilised low pressure distillations, macerations, sous vide cooking and traditional distillation, each depending on the botanical. When the winter months came about, and nature yields hardier botanicals, we once again employed the Kaboom still, and its unique ability to draw a richer distillate to create a liqueur more fitting of the colder weather.