To produce a decent (i.e. distilled) gin requires a two stage process – first a base ‘neutral spirit’ is made and then this is flavoured by through re-distillation with seeds, berries, roots, fruits and herbs and spices – collectively known as ‘botanicals’.

To make the base spirit, early gin distillers would distil the fermented wash (type of beer) in a traditional pot-still. The first distillation of such a still produces a weak, rough spirit known as 'low wines'. Repeated distillation of these low wines (rectification) strengthens and purifies the spirit.

To produce a distilled gin this base spirit must be redistilled with the chosen botanicals to extract their essential oils and so flavour the base spirit. Lastly the now gin-flavoured spirit is reduced to bottling strength by the addition of water (hydration).

There are two main distillation methods used for extracting the botanical's flavour:

The most traditional and still the most common method for gin distillation. A mix of juniper and other botanicals is steeped in neutral spirit which has been reduced in strength with water (normally to approx. 50% alc./vol.). Some producers leave the botanicals steeping for as long as 48 hours before distillation; others believe that maceration 'stews' the flavours and so distil the mixture immediately. Whichever, as soon as maceration is deemed to be completed, the mixture is distilled in a pot still, producing a spirit full of the aromas and flavours of the botanicals. Water is added to reduce the gin distillate to bottling strength.

With this method, the mix of juniper and botanicals do not come into contact with liquid spirit at all. Instead, they are placed in baskets inside modified stills and only encounter the spirit as vapour. The botanical-infused vapour then condenses into a botanical-infused spirit and water is added to reduce to bottling strength.

The two methods above may be combined with some distillers using a combination of steep & boil and vapour infusion. In this case some botanicals will be steeped in the boil pot with the same still also having a chamber to hold the botanicals, through which the botanical infused vapour from the boil pot will pass. There are other variables a distiller may employ as follows.

This is basically the 'steep & boil' method but as the name suggests the spirit is redistilled with the botanicals under vacuum so reducing the temperature at which the ethanol alcohol boils. The stronger the vacuum so the lower the boiling temperature.

Proponents of this type of distillation claim a fresher flavoured gin is produced as the need to cook the botanicals is negated by the reduced boiling point. The downside to vacuum distillation is the difficulty in scaling up to an industrial rather than lab/small scale operation.

This variation to the 'steep & boil' method is being increasingly used by new gin makers. Each botanical is steeped and boiled separately and then the numerous resulting single botanical distillates blended together to create the finished gin. Proponents claim this method allows more control while traditionalists say the interaction between the botanical's essential oils while steeping and boiling inside the still is lost resulting in a disjointed gin.

The one-shot method simply means a recipe is followed where a given volume of neutral alcohol is distilled with quantities of each botanical as specified by that gin's recipe.

Whereas, multi-shot gins are made by multiplying the proportion of botanicals to base alcohol during redistillation and then reducing the resulting super-concentrated botanical distillate back to the concentration specified in the original recipe by blending in more neutral alcohol. Thus a two-shot gin with be distilled with twice the amount of botanicals and after distillation thinned back to the proportions stated in the recipe by adding the same volume of alcohol again. Hence, using a two-shot process each distillation yields twice the volume of gin.

Multi-shot has the benefit of saving on still usage so increasing production capacity and efficiency. Proponents say that multi-shot has the benefit of reducing the influence of inaccurately measured botanicals as the ratio of inaccuracy is reduced when compared to the same miss measurement in a one-shot gin. Most international brands of gin are multi-shot with one-shot being more the preserve of 'craft' or 'boutique' distillers.

Rectification of the base alcohol

Distilling wash (beer) in a pot still produces a liquid with an alcohol content of around 21% alc./vol.. Subsequent pot still distillations can be used to increase the strength of the distillate to 70% alc./vol. and this is exactly how Scotch malt whisky is made to this day. Originally this is also how the base alcohol used to make gin was distilled. However, 70% alcohol means there are 30% impurities and while that is OK, even desirable in a spirit that will be mellowed by aging in oak casks, base alcohol made using this process would produce pretty rough gin.

Modern fractional distillation in a column still can produce alcohol up to 96.3% alcohol and in an age where gins are praised for their 'cleanness', so column stills of one type or another are usually employed in the production of the neutral alcohol on which gins are based.

In early gin production, prior to the invention of the column still, it was common to mask the hash quality of the base alcohol with strongly flavoured botanicals and the addition of sugar. Today this style of gin is known as old tom.

Grain (particularly wheat and occasionally barley) is most commonly used to make the base neutral spirit for gin production. Thanks to distillers stating 'made with quality grain alcohol' or similar on their gin labels, the use of grain neutral spirit is regarded as a premium over molasses neutral spirit, even though some distillers privately say they think it makes better gin. However, gin can be made with alcohol made from any agricultural base and gins made from alcohols including potatoes and grapes are now fashionable.

The rectified neutral spirit at around 96% alc./vol. (often supplied by a third-party supplier), is diluted back to around 50% alc./vol. using purified or spring water. If the 'steep & boil' method is to be employed the botanicals are added, and as discussed above, often left to steep in the spirit for a period before distillation is commenced.

If the 'vapour infusion' method is to be used then the botanicals will be loaded into a basket or bag and placed inside a chamber in the still's lyne arm so forcing the vapour through the botanicals on its journey towards the condenser.

The essential oils and other aromatic compounds found in the botanicals used to flavour gin are absorbed by the neutral spirit in which the botanicals are steeped, or by the vapour as it passes through them in the case of vapour infused gin, and are carried through the distillation process as a part of the vapour.

The stillman exercises considerable control over the distillation - the art is knowing when to 'make the cut'. Different flavouring agents evaporate at different temperatures, and he has to find the right balance. He (and it almost always is a he) will use only the 'middle cut' of the spirit flow for the new spirit. He will assess the standard of the run by taking samples and by measuring the temperature and strength of the distillate as it runs from the condenser.

The first runnings, known as heads (or foreshots), and the last, known as tails (or feints), are either discarded or set aside to be added to the wash of the next distillation. The heart of the run will be collected to become gin.

Because the spirit being distilled is very pure neutral alcohol there will be very little in the way of heads as methanol and other harmful volatile alcohols will have already been removed when the spirit was rectified. Hence in gin distillation there are not really heads as such but a quantity of the initial run will be discarded to ensure any deposits from the last distillation which might remain in the still have been flushed out.

Once the initial 'heads' have been discarded the distiller will start collecting the 'heart', the spirit which will end up being bottled as gin. The oils from some botanicals will vaporise before that of others so the flavour of the distillate will change with citrus tending to come off first. The distiller will know from experience roughly when bad flavours will start to emerge as unwanted oils and other heavier substances start to emerge. At this stage he will start regularly sampling to decide when to switch from hearts and start discarding what are called tails due to their emerging at the tail end of the run.

Redistilling an already very pure distillate in a copper pot still helps produce a softer, some say 'smoother' distillate. The copper the stills are made from plays a part in this process. Chemically copper acts as a catalyst to promote the formation of esters which impart desirable fruity notes to the spirit. Copper also reacts sacrificially to remove unwanted sulphur compounds which smell of struck matches, drains, rotten eggs, farts and cabbage - none of which make for an appealing gin. Copper helps turn these nasty smelling sulphur compounds into easily removed Copper Sulphate (U.S. Copper Sulfate) a copper salt (CuSO4•5H2O). However, while copper may have these beneficial properties the fact that such purified neutral alcohol is being used means that sulphur is not an issue so many gin distillers use cheaper stainless steel pot stills.

Every gin has a different recipe, but all gins are flavoured with botanicals - seeds, berries, roots, fruits, peel, spices or herbs - and all must contain juniper. After juniper, coriander and angelica are the most popular botanicals and these three are the main flavours in a London Dry gin.

More than a hundred different botanicals are commonly used to flavour gin and individual brands can contain anything from seven to twenty. It is the balance of these different ingredients and the varying distillation methods that give different brands their distinctive styles.

To keep a gin brand consistent in the light of these complex recipes and naturally variable ingredients is a real challenge. The master distiller must buy batches of botanicals which best suit a particular gin's style and store these for production over the next year or so. To do this, he or she must sample a number of specimens from every crop as botanicals, even from a single crop, can vary dramatically.

Hardly any of today's gins are aged, although there are signs of a revival of this historic practice. Unlike 'rough' spirits such as whiskey and brandy, gin does not require long periods of aging and if left for much more than six months will quickly become over woody and dry. To age gin well-seasoned casks are essential and a mere two to three months maturation is usually plenty long enough. 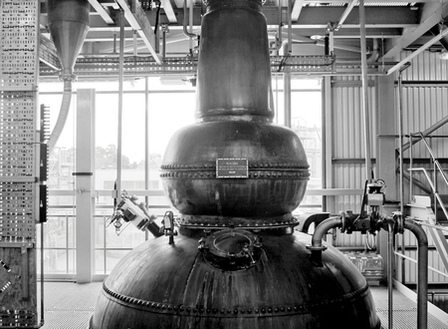