How to open a bottle of champagne & sabrage

"Too much of anything is bad, but too much champagne is just right," said Mark Twain, and he was bang-on. Champagne is our go-to drink for celebrations, during the festive season and at New Year's Eve. But there is an art to opening champagne. Here's how.

A German scientist has registered the speed of a cork leaving a vigorously shaken bottle of champagne at 40 kilometres per hour, and theorized that corks could reach higher speeds if exposed to heat. So it's crucial to be careful.

• Whether you've shaken the bottle or not, your hand should be on the cork at all times.

• Remove all the foil, not just the top but the neck as well.

• Place your hand over the metal cage that covers the cork and extends down over the neck of the bottle. Keeping your hand firmly on top of the cage, gently undo the metal clasp.

• Once the cage has been opened, some prefer to remove it altogether, however, you can simply loosen it which is better as some bottles have a lot of CO2 built up inside desperate to get out. Removing the cage can cause the cork to pop straight out.

• Whether or not you're removing the cage, it's best at this point to use a dry tea towel. Rest the bottle against your side and have one hand over the cork and the other hand firmly holding the neck.

• Aim the bottle away from everyone, including yourself, in case the cork should suddenly shoot out.

• You should be twisting the bottle rather than the cork as you ease it out.

• The cork will start to rise and loosen, at this point try not to force it. When it comes out the sound should be a sigh rather than a pop. The loud pop people often associate with opening champagne may sound celebratory, but it's a sign that too much gas built up inside the bottle.

For a more impressive demonstration what better way to ring in the new year than skilfully slicing the top off a bottle of champagne, using the traditional art of sabrage? Check out our video, with the capable Simone Caporale demonstrating that you don't even need a sword.

• Make sure the bottle is well chilled, and the neck feels frozen to the touch. Placing it upside-down in an ice well or bucket is an efficient way to achieve this.

• Remove all the foil from the neck of the bottle.

• Open the cage and close to again on the bottle's second rim so the cage will come off with the top of the bottle.

• You will need to find the bottle's welding line, there should be two, one on each side. To preform sabrage it is necessary to follow these lines with the blade.

• Using your tool, whether it's a saber, knife, bar blade, spoon or belt buckle, gently follow the line as if you are running the blade along it applying a small amount of pressure. The neck should simply pop off.

Temperature when tasting champagne is absolutely crucial. Too warm and the acidity will rise to the surface and the bubble will start to dissipate. Too cold and the entire character of the wine will be masked. 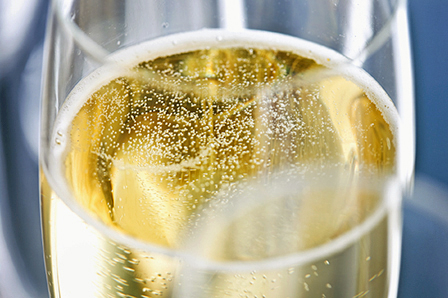 Flutes, coupes or wine glasses? Traditionally, champagne is served up in long, slender flutes. The idea behind these is to trap the effervescence of the wine in the neck of the glass, as well as the delicate aromas. This does work in most instances, but it doesn't really cater for fuller-bodied or richer champagnes.

You may prefer to drink champagne in small, tulip-shaped glasses as they allow a bit more air into the wine. There are of course, the old-fashioned coupes that seem very glamourous in an old-fashioned sort of way. Sadly, they don't do much for the champagne as the sparkle evaporates far too quickly. In fact according to research they're both wrong and we'd be better off drinking champagne in from something more akin to a wine glass than a flute or a coupe. The problem with both these shapes is they don't allow the bubbles to work their magic properly. 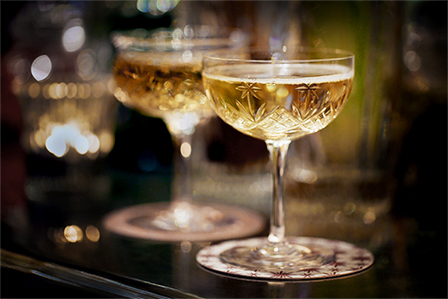 As they rise to the top, bubbles induce flow patterns inside the champagne, effectively stirring the liquid and changing the taste. In a flute, however, while the bubbles mix the liquid more completely than a coupe, the narrow aperture highly concentrates the CO2 and irritates the nose. We have pain receptors for high levels of CO2 and the bubbles popping out of a flute will active these in our nose and mouths, thus affecting the aromas and taste.

A coupe, on the other hand, will dilute the effect of the CO2 on the nose, but will also minimise the bubbles' ability to bring flavours and scents to the surface. there is also a trend by some sommeliers to serve champagne in conventional wine glasses.

For superb and old vintages, they can even benefit from being decanted prior to serving, the wine can need a little aeration and the exposure does not kill the bubbles.