How to stir a cocktail

Stirring is the most basic way of mixing a cocktail. You might not give much thought to a technique used to stir a cup of tea or even a pot of paint, but cocktails deserve a little more reverence.

There is much debate among bartenders as to the best vessel to use for stirring, with some preferring glass to metal. Scientific experiments by the New York-based Dave Arnold, prove that metal heats up and cools down quickly, and in doing so uses minimal energy, so having little effect on the temperature of the finished cocktail. In contrast, heavy glass stirring/mixing glasses have more thermal mass, so absorb more energy from the drink being mixed. The heavier they are, the more energy they will absorb. Pre-chilling or freezing such glasses mitigates this effect and, according to Dave, "makes them as good as, or better than, an un-chilled metal shaker".

Mixing glasses come in a multitude of shapes and sizes and, bearing in mind the above, heavy Japanese cut-glass stirring glasses stored in a refrigerator or freezer are now favoured in most high-end bars. If a specially designed lipped mixing glass is not available, a Boston glass (the glass half of a Boston shaker) or even the base of a standard shaker, will suffice.

There are almost as many different styles of bar spoon on the market as there are stirring glasses. Some have spiralling stems, some have flat ends and others three-pronged fork ends. The key thing is for your spoon to have a long stem so it will reach down to the base of the glass while allowing you to comfortably hold the stem high above the glass.

If a cocktail recipe calls for you to 'stir with ice and strain', then you should:

1. Ideally pre-chill both your mixing glass and serving glass in a refrigerator or freezer. However, if this is not possible, you will need to chill them by first filling with ice and then topping with water. Stir the ice and water in the glass as if mixing a drink before dumping the contents.

2. Measure your ingredients into your chilled mixing glass and then fill two-thirds with ice. Bartending myth used to have it that adding ice last would better control dilution, as the ice would not be melting as you measured in the ingredients. However, science (again, Dave Arnold) has shown that leaving the ingredients on ice for as much as a minute has little effect on either dilution or the temperature of the final cocktail.

3. Hold the bar spoon between your thumb and the first two fingers of your dominant hand with the spoon's shaft running between your middle finger and ring finger.

4. Slide the bowl of the spoon down the inside edge of the glass until it almost touches the base of the glass.

5. Keeping your arm, and to an extent your wrist still, use your fingers to pull the spoon towards and then away from you, aiming to hit the quarter hour marks on an imaginary clock-face inside your mixing glass. As the spoon runs around so it will spin the ice and liquid in the glass, while spinning on its own axis in your fingers.

6. Stir briskly for about 30-45 seconds - this should account for at least 50 revolutions.

7. Place your strainer into or over the mixing glass (see straining) and strain into your chilled serving glass. If the recipe calls for the drink to be served over ice then you should ice your glass first. Never use the ice from the mixing glass in the drink itself.

8. The ice used during stirring is now spent and should be dumped, or alternatively can be left in the mixing glass to keep it chilled ready for the next drink. If the latter, remember to dump the ice and rinse the glass with cold water before making the next drink. 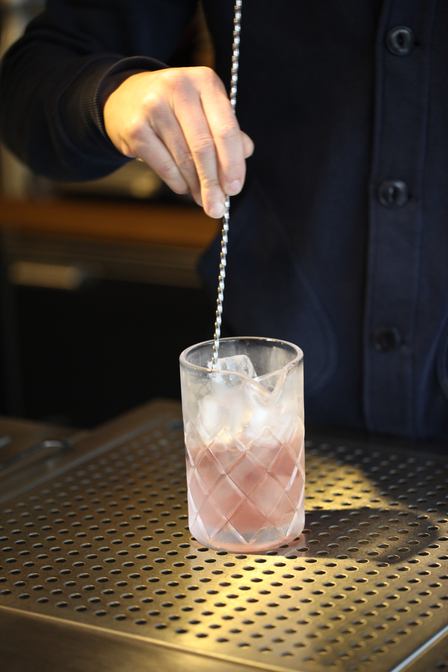