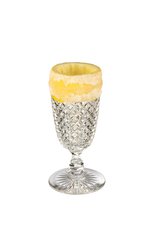 It may not be one to sample straight up, but lemon juice is an incredibly useful and versatile ingredient that adds zingy freshness and cuts across anything overly sweet.

Lemon juice is also a great source of vitamin C - a fact discovered in the eighteenth century by British physician and pioneer of naval hygiene, James Lind, when he found that adding citrus juice to the diets of seamen could both treat and keep scurvy at bay.

Lemons, thought to have their origins in north-western India, were first introduced to the New World in 1493 by the Italian explorer and navigator Christopher Columbus, who brought lemon seeds on his voyage to plant in Hispaniola. Later, in the 1800s, lemons became a sign of wealth, and the well-heeled grew trees outside of their homes to display their affluence to passers-by.

Today, lemons are grown commercially for culinary and medicinal purposes, as well as in the production of household cleaning products, perfumes, soaps and skin creams. It really is a miracle fruit.

So today, let's celebrate this citrusy, tangy juice. As they say, when life gives you lemons...make a Lemon Drop Crusta, a deliciously zesty riff on a vodka sour.

The Savoy's most famous bartender, and the name behind the Savoy Cocktail Book, which was based on a series of recipe cards he'd built up over his long career, Harry Craddock was born on this day in 1875 in Stroud, England.

Harry crossed the Atlantic, worked at iconic New York bars including the Hoffman House and the Knickerbocker Hotel, then returned home, post-Prohibition, complete with a highly marketable American accent, reputation and passport.

Despite stints at the Savoy, the Dorchester and Brown's Hotel, Craddock sadly died in poverty and was buried in a pauper's grave. We are toasting him with one of his most revered recipes, that for a Corpse Reviver No. 2. To quote Harry, "Four of these taken in swift succession will unrevive the corpse again."