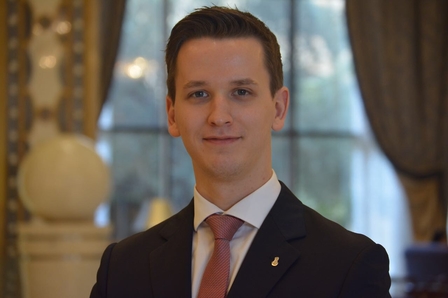 As he approaches six months in the role, a lot has changed for the eleventh head bartender of the Savoy’s American Bar.

“I think for everybody who works in the American Bar, every time you step through the doors and you are behind that bar counter, you really have to get excited and really appreciate it,” says Maxim Schulte, the Hamburg native who recently became the eleventh head bartender of the Savoy’s historic cocktail haven.

Although he was yet to turn 30 when bar manager Declan McGurk approached him to discuss interviewing for the position, Schulte brought a diverse hotel career to the table. Besides stints in China, southeast Asia, the Middle East and Europe, he had scored a high-profile win in Beefeater’s MIXLDN 7 global cocktail challenge.

“For me, personally, that was very important,” Schulte says, noting that when he has made hiring decisions himself, he’s found competition wins demonstrate creativity and drive. “It was a time when I had to make a decision. Do I want to stay in the bar business, as a bartender, as a bar manager, or whatever, or do I want to go high up the career ladder in the hotel? And I think for me, personally, the Beefeater win set a bit of a tone.”

Besides his hotel background, he feels that his culturally diverse career may also have helped him secure what’s considered one of the biggest jobs in bartending. “It’s never a bad point to have a lot of cultural experience,” Schulte observes, with impeccable precision. “It makes you not necessarily always grow professionally, but definitely personally. Managing diversity and working with very culturally diverse groups is, I think, for everyone who leaves their own country quite a big challenge and it shapes your personality quite a bit.”

The Savoy hiring process was rigorous but no more so than for any leadership role at a big hotel, Schulte reports. While he was fully geared to get on a plane to London for a physical meeting, all six or seven interviews were conducted online, from Macau, where he was head bartender at the Ritz-Carlton. “New technology allows us to have one-to-one conversations, even face-to-face or on the phone, without taking a 16-hour flight,” he says.

Of course, taking over from Erik Lorincz at the helm of London’s oldest surviving cocktail bar was not quite like securing any other job. Schulte heard he had the position before the rest of his team knew, while the whole American Bar crew had to keep the news a secret until the Savoy was ready to make the announcement. “It was crazy keeping that a secret,” he recalls. “This is something you really want to talk about with your friends but you can’t because you know it’s all supposed to be timed well.”

When the news emerged, the reaction was extreme. “Between social media and publications, it was very overwhelming,” Schulte says. “On the day that the announcement was made, my phone was exploding, which was one of those unreal experiences that are hitting me more and more these days.”

Other unreal experiences? “It’s strange to go from being – if I can say this – being a nobody to starting to be recognized when you walk into a bar,” Schulte says. “It’s quite strange. It still surprises me a lot.”

While he may have been relatively anonymous, Schulte was far from a low achiever. At Ritz-Carlton in Riyadh, Saudi Arabia, he worked wonders with a palette missing the bartender’s signature ingredient: alcohol. Booze is banned throughout the conservative Muslim kingdom, with penalties including imprisonment and public flogging: It’s even illegal to cross the border from neighbouring Bahrain with alcohol still in your bloodstream.

“I learned so much about flavours and technique through that, it was insane,” Schulte says. “Creating a non-alcoholic beverage concept for an entire hotel, with six restaurants with six different concepts, and each menu having six to eight drinks, doing all of that non-alcoholic without product lines like Seedlip, it was a big task.”

In Macau, he put the Ritz-Carlton’s bar on the map as the island’s first entry onto the well-regarded Asia’s 50 Best Bars list in 2018.

Almost six months into his new role, Schulte is currently in the throes of wrapping up his first American Bar menu, which will launch on 1 April. But he doesn’t see his function as to put a personal mark on the bar, more to extend a rich and continuous legacy. “At the moment it’s really all about getting to know the American Bar,” he says. “We have so many regular guests that getting to know all of them is very important for me… But for me the greatest focus of all is to be working with the team.”

Rather as Patek Philippe watches would have you believe, then, you don’t so much own the American Bar gig as look after it for the next generation. Besides working closely with McGurk, Schulte has met all of his surviving predecessors and mined them for advice. “The experience of Peter Dorelli in that bar – it’s uncanny!” he says. “So every time he comes, you try to poke a little bit, you try to squeeze a little bit out of him… It’s nice to have them around, and it’s good to know that you can always be in contact with them if you really need something.”

Schulte has also started to explore the hotel’s legendary archive, his first time working with a historian. One signature find? Comedians Laurel and Hardy wanted to drink their way through all 700-odd mixes in the Savoy Cocktail Book. (In between times, they favoured White Ladies.)

While head bartender at the American Bar is a career-defining role, Schulte stays true to his roots. His first bartending role, part of an apprenticeship that saw him explore different departments within the property, was at Hamburg’s stylish George Hotel. “The leadership team at the bar there was just incredible,” he says. “And, still, every time I’m back in Hamburg, I go there to the bar and say, ‘Look, thank you so much for how you shaped me and gave me my foundation for this job.’” 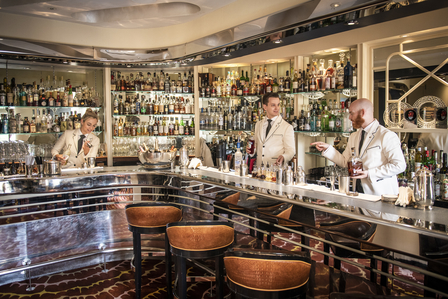