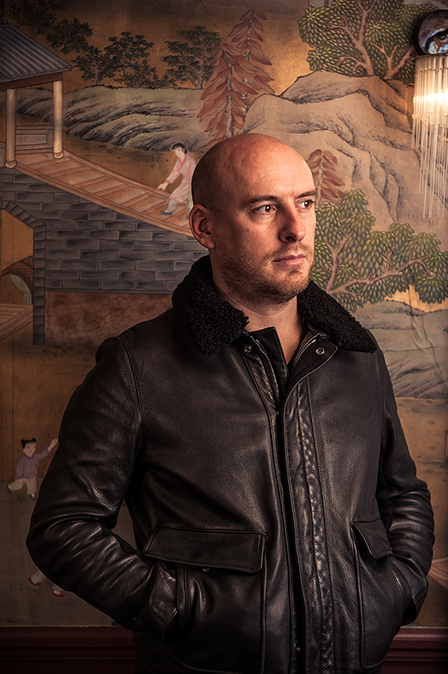 Xavier Padovani is to many in London the face of ECC, particularly as it spreads out across the world, from Chinatown to New York and Ibiza. Known for his battle cry of "champagne for all", the London-based cocktail and drinks entrepreneur is now embarking on a new adventure, and a new spirit, one that stretches from the French Alps to (very shortly) a back bar near you.

It was all a bit by mistake, really, getting into the world of drinks. I was living as a student in Lyon and, having finished my degree, I had a year to kill before enrolling in the French army for my yearlong obligatory service. A friend was opening a new restaurant for the famed Paul Bocuse and asked me to help with the opening and work at the bar with their sommelier. The rest is history.

I moved to London for a year to learn English in the late 90's but never really left. Starting at Quaglino's cocktail bar on Bury Street in St. James, I somehow developed a real taste for bartending.

After travelling for a while I returned for the opening of the Sanderson Hotel. This is where I met Henry Besant and I think it goes without saying that being part of the opening team at the Sanderson was quite an adventure.

While I was at the Sanderson, I met Phlippe Starck and started working for him on a few projects such as Bon II, Kong and most recently Paris' Mama Shelter. I opened Opium on Dean Street for the Breakfast Group; a very different style of operation to the Sanderson.

I haven't just worked in bars though, moving to the sales side of the industry with First Drinks Brands and then to William Grant & Sons to launch Monkey Shoulder. After two years with Monkey Shoulder I did the international launch for Hendrick's Gin and travelled the globe for seven years representing it. In 2012 I decided to go out on my own and open my agency, Orfeus.

But it was while launching Hendrick's Gin in France that Thierry Daniel took me to a bar and told me I had to meet these boys. They turned out to be Romee De Goriainoff, Pierre-Charles Cros and Olivier Bon who had just opened the ECC on rue Montorgueil.

Seven years later Romee, Olivier and Pierre Charles have not only became close friends but business partners. We started working together when we decided to open the ECC Chinatown in London, the boys first venture outside France. Since then, we have grown our business partnership in London, and have also opened in North America and Spain. I'm not involved in the group's operations in France which leaves me the ability to juggle my work with them and my work for Orfeus.

I don't think I ever had one specific mentor but there are many individuals I have always been inspired by and who drove me to accomplish only the best. Charles Gordon has no doubt been a source of inspiration.

I'm constantly operating in multiple markets, which takes a fair amount of organisation. Although I'm primarily based in London, I also work in New York, Ibiza and France. I don't spend a lot of time in Paris - just enough to catch up with the ECC crew and work with Eric Fossard and Thierry Daniel on the Paris bar show: Cocktails Spirits.

I also spend a few days in the French Alps every month or so at the Domaine Des Hautes Glace working on Vulson, the new spirit. I visit New York about every eight weeks and as for Ibiza it depends. I usually go before the season kicks off, a few times during the season and at the end of the season.

The story of Vulson is one I'm very passionate about. It all started when I discovered the Domaine des Hautes Glaces a couple of years ago, during the Paris Bar Show. What struck me at first was the attitude of these guys, up in the mountains, on their own, not only distilling fantastic liquid but doing so in perfect harmony with the environment with perfected techniques that only the best of distillers can acquire with years of experience. It's something I had never seen before.

I had to visit the Alps to better understand their approach, their work and to see it with my own eyes. Once I got to the Domaine, Fred Revol demonstrated an approach and a methodology with techniques I had rarely witnessed before, i.e. direct flam. This collective of farmers, oenologists & friends headed up by Fred, distill locally grown organic rye and do so in the most sustainable way possible, without compromise. What you see is what you get. Every single step is carefully thought through with the liquid at its final stage representing every single aspect of the terroir much like a wine would. Needless to say it tastes good.

It's a specific distillation process that Fred Revol started to develop years ago but I felt because of their isolation no one knew about it and this had to change. We sat at a table, had some wine and saucisson and the adventure started. The chaps came to London, I went back to the mountains, we exchanged a few ideas and decided to launch Vulson together on a shoestring budget.

Many friends helped us throughout the whole process. We called a few favours and it all came together. We presented the project to Sukhinder Singh and Chris Seale who understood exactly what we were trying to achieve and they decided to be part of the adventure: Speciality Brands team is representing Vulson in the UK.

Vulson is a French Alpine Rye, but at the same time and most importantly it is a human adventure that represents an attitude towards distilling.

Overall the aim of Vulson is to demonstrate that it is commercially viable to distill a quality spirit in perfect harmony with the local terroir and with respect to the local environment. For me, somehow, the reason why I had to be part of this project was mainly because I think it is important to concentrate on communicating the way things are actually done at the Domaine and the way it should be done more often, in my opinion.

Vulson as a brand wants to encourage potential distillers to operate with a similar attitude towards sustainable distilling so part of the Vulson project is to invite distillers or future distillers to come and look at how Fred processes and distils the cereals.

The one and only goal I have always been working towards is quite simple. It is to wake up every day and be excited about everything I do. That goal being accomplished I have other objectives to concentrate on.

I would love to motivate bigger brands to become a little more environmentally friendly and I cannot find a better goal to be working towards than this objective. Motivating people to drink better while being aware of the impact distilling can have on the environment is something that is often overlooked.

It's about time that we started acting a bit more responsibly towards the planet. I have not yet turned hippy - I know, too many trips to Ibiza - but my adventure with the Domaine Des Hautes Glaces has truly changed my perception of distilling and commercializing brands.

Eventually though my retirement plans are very straightforward. I want to buy this little spot I know on a little Caribbean island where I have become a regular visitor and finish my days with the wife, my feet in the sea, sipping on a coconut.