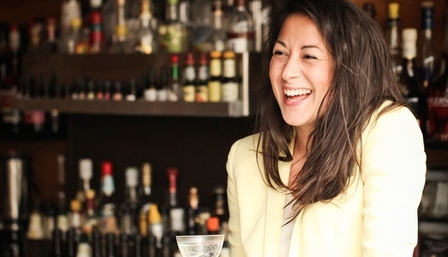 Although she’s routinely asked to speak on the topic of being an entrepreneur, Hannah Sharman-Cox doesn’t see herself as particularly entrepreneurial. “I’m just really determined and a bit lucky, but also can’t bear to be beaten, can’t bear to be told I can’t do something,” says the MD of London Cocktail Week.

And, although she runs the UK’s biggest cocktail event, Sharman-Cox wan’t so keen on her first bar job, in the Essex town where she grew up. “I was too young to work behind the bar so I used to tray the drinks from the bar to the customer. However, I also had to take payments and give them their change from an ashtray full of coins,” she recalls. “It was hand-eye coordination AND maths, the worst job I ever had.”

It was tap dancing, not liquids, which brought her from Southend to London and a course at Bird College of Performing Arts. And, unlike many performing arts graduates, Sharman-Cox made it to the level of dancing professionally. She spent a year or so in the States but channelling her inner Liza Minelli on a US tour proved the end of that particular dream. “It was way less glamorous than it sounds,” she recalls. “We did Ohio, Indiana, all that awful middle bit, ending up in North Dakota in February. It was very cold, and I just thought ‘Bollocks to this!’”

Back in London, Sharman-Cox fell into a job at Milk & Honey London by sheer luck – although they wouldn’t even let her in the door the first time she tried to visit. She was working at Mulberry on Bond Street and a friend from The Player (the sister bar at the time) mentioned Milk & Honey needed a receptionist. “I phoned up this lady and I was like, ‘Hi, do you need somebody?’ and she said, ‘Yeah, fine, start,’” Sharman-Cox recalls. “That was it. It was such a different time then.”

A transformative time for the London bar scene proved equally transformative for Sharman-Cox. Dick Bradsell and Dale DeGroff were both on the scene (Bradsell’s daughter, Bea, is now a full time member of team DrinkUp), as was Sasha Petraske, founder of the original Milk & Honey, providing the chance to learn about cocktails from the very best. And Jonathan Downey, creator of the Match group, was a hands-on proprietor.

“Jonathan is such a clever bloke” Sharman-Cox says. “His eye, his vision and his attention to detail was a bit frightening but amazing training – amazing! It’s why everyone who worked at Milk and Honey is still so good at our jobs.”

Working with Downey proved educational in other ways, opening up a sophisticated, cosmopolitan big-city scene. “I grew up in the back end of Southend and went to college in the back end of Sidcup. I hadn’t lived that life at all,” Sharman-Cox recalls. “We opened the most beautiful ski hotel and I’d never even gone near a mountain!”

Having moved up the ranks from receptionist to events manager at Milk & Honey, Sharman-Cox transitioned to the company now known as Difford’s Guide with the intention of learning to write. “I love writing: I always wanted to write,” she says. “But in the end I didn’t do any writing at all.”

While a career as a writer may not have materialised, London Cocktail Week did emerge from the creative liquid anarchy of Difford’s Guide. “Seven years I worked for Simon, doing all sorts of hare-brained schemes that he dreamed up. One of them was Cocktail Week, and I just got on with it,” Sharman-Cox recalls. “It was never really a proper business to be honest. It was just a bit of a nice idea and a side project, but this side project got a bit out of hand.”

And, although hundreds of bars participate in London Cocktail Week today, it remained a side project for some time. Alongside it, Sharman-Cox worked with Jake Burger on Portobello Road gin and also shot off to Bali to create a cocktail book with Dre Masso.

Over the years that Sharman-Cox has worked in the industry, consumer attitudes to alcohol have changed beyond recognition. London has evolved from a place where a Cosmopolitan was the height of sophistication to one where the world and its grandmother are connoisseurs of artisan gins, Pinterest boards feature flowers frozen into ice cubes and mixing cocktails at home is almost as common as cooking from scratch.

“I remember helping launch the Ginstitute with Portobello Road gin when it was in a tiny room that used to be Jake’s flat, and now they’ve had something like 40,000 people through that experience at a hundred quid a head,” Sharman-Cox says. “It’s unbelievable, and brilliant, that that many people care that much now.”

Surfing that changing relationship to booze, Sukhinder Singh and Raj Sawhney acquired London Cocktail Week five years ago, keeping Sharman-Cox in place as founder, co-owner, and MD. “They said, ‘We’ll have this and we’ll help you, but you have to run it, you have to be the boss: it’s your project,” she recalls.

She now has a team of seven, runs the businesses under the umbrella of DrinkUp.London, and has seen London Cocktail Week become a cultural event supported by the London Mayor’s Office, Visit London, and Visit Britain.

And, while Sharman-Cox is looking forward to the tenth London Cocktail Week in 2019 as a rite of passage, the ninth is shaping up well too. “We have 300 bars on the list, each serving a £6 cocktail for those with the festival pass, and those bars spread all over London,” she says. “We then have the epicentre of the festival, which is The Cocktail Village. This year, that’s part of Truman Brewery on Brick Lane, with 40 pop-up bars again all serving £6 drinks and free entry with your festival pass.”

For the trade, Sharman-Cox will be presenting on – what else? – entrepreneurialism. “I’m not really sure what I think entrepreneurialism is,” she says. “I guess it’s like turning your hand to anything.” And that she most certainly has done.