Words by Theodora Sutcliffe. Image by Joe Rosenthal and courtesy of 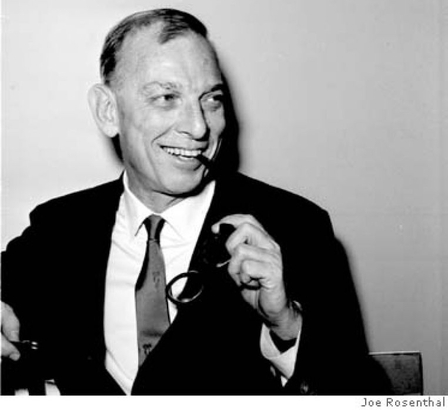 Most famous as the man who brought the Irish Coffee to the United States in the 1950s – and, after writing about it, being credited with it, and being courted by Irish whiskey distillers, became thoroughly sick of the stuff – Stanton “Stan” Delaplane was a San Francisco institution.

An old school newspaperman who never attended university or studied journalism – one friend claimed he never finished high school – Delaplane won America's prestigious Pulitzer prize for his reporting on a wannabe breakaway state in Northern California. He wrote a travel advice column that was syndicated across America in the days when international travel was expensive, difficult and rare.

And he put his limpid, studiedly unfussy prose – which many compare to Hemingway, whom he interviewed – to use in a wildly popular column he wrote for the San Francisco Chronicle. The last one was published on the day he died.

Born in Chicago, Delaplane moved to California as a teenager, and worked regular jobs before joining the Oakland Tribune in their circulation department. He started writing in the 1930s for the short-lived Apéritif magazine. (This, despite the name, covered the arts and society rather than cocktails.)

In 1936, when Apéritif folded, he took a job at the San Francisco Chronicle. There he would remain for over 50 years, interrupted only by service in World War II. For all his impressive title of Lieutenant-Commander in the Marines, Delaplane actually worked for the War Shipping Administration. His job, as an assistant to the director, was coordinating PR efforts and writing stories to encourage young men to risk German torpedos and join the merchant navy.

A slight man, with a long yet friendly face, Delaplane was a dedicated smoker and serious drinker. Although he professed to be unable to tell one tequila from another, let alone Scotch, and famously claimed a fondness for a sneaky hit of cooking sherry, he enjoyed the finer things in life, both food and drink.

Delaplane spent time in the 70s tracking down the best Margaritas in Mexico. Yet the Martini was his love. He not only popularised the Martini from Duke's in London but, according to Salvatore Calabrese, inspired its creation.

Over his lifetime, he was married three times and had four children. Yet the Martini was a constant. For the last 15 years of his life, Delaplane would travel down the road to the Washington Square Bar & Grill, bearing a typed first draft of the next day's column, order a Martini, and then edit it with a thick black pencil. Today, his Olivetti typewriter – manual, not electric – hangs over the bar as a memorial.

Much as he might have tired of his association with the Irish Coffee, Delaplane had little truck with anyone who suggested he did not import and popularise the drink. “'Claim' has nothing to do with it! It's documented,” he said.