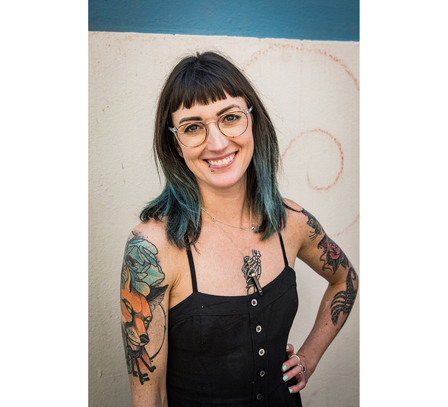 “In 2014 I was successful, a sommelier and GM of an institution restaurant in Vancouver ,” says Kelsey Ramage, co-founder of Trash Tiki, the sustainable business that’s transforming the way the bartending community relates to waste.

“But I felt the need to do something more. I wanted to get back into my roots as a bartender, develop my creative side, and see how far I could push myself,” she says. “I sold everything I owned, packed up and left.”

Ramage took the leap and moved to London in 2015, joining the team at Dandelyan in what was formerly the Mondrian Hotel. “I worked with some of the best in our industry, developed my voice and found an outlet for my creativity,” she says.

It was here Ramage partnered up with Iain Griffiths of White Lyan and Dandelyan fame. With hopes to drive change in the industry, they launched Trash Tiki at the end of 2016, an online resource providing free information and anti-waste recipes. Avocado stones, pistachio shells and watermelon rinds are just a few of the bar by-products the pair transform into sustainable drinks.

“We created an open and honest platform that’s free, and gets used by bartenders regularly ,” Ramage says. “Content creation can be such a labour of love. Ensuring that it’s useful information – simple to follow, easy to access – and has the scalability and application for bars is so important.”

After success in the UK, the Trash Tiki duo identified worldwide potential for the business. “We pulled together a tour of pop-ups from Asia to North and South America, Europe and Australia ,” Ramage says. “We met bartenders that supported us, taught them exactly how we execute our recipes and why, and helped them use these methods in their bars.”

Food waste is an important issue, not only in the UK but across the globe. One-third of food produced globally for human consumption is lost or wasted each year. That equates to 1.3 billion tonnes. The hospitality industry is responsible for 3.4 million tonnes of waste arising from spoilage, to food preparation and consumer plates. Reductions in food waste can positively impact livelihoods and climate change, while also reaching sustainable development goals such as zero hunger and sustainable consumption and production patterns.

For Ramage, the world tour was fundamental in their growth. “It really solidified Trash Tiki’s reach and created a worldwide support network of sustainable bar practices,” she says. “The work we were doing to spread the Trash Tiki ethos surrounding bar waste was exponential.”

As a bartender, Ramage was used to long hours and hard work - but the travel lifestyle proved even more demanding. “I survived 10 months on the road without killing myself or anyone else,” Ramage says. “Travel is such an eye opening and amazing experience, but it can also be physically, emotionally and mentally taxing. Our tour schedule was unforgiving at times, heading into a city, setting up prep, giving a seminar and then a pop-up and packing up just two days later to do it again.”

Whilst Trash Tiki’s eccentric character stands out, their values remain at the heart of the business. “Keeping our message loud and clear has always been at the forefront, but never at the compromise of having a great time,” Ramage says.

Besides highlighting ways in which the industry could reduce waste, Trash Tiki offer fun sessions for the bartending community. “We’ve always wanted to ensure that anyone coming down was here to have a great time,” Ramage explains. “Maintaining that ‘Tiki’ sense of leaving your day-to-day at the door’s threshold but knowing that the drinks were being created with an anti-waste intention.”

Responses varied from city to city. “As with any event, some went wild, and some weren’t as busy, but we were able to keep ourselves travelling,” she says. “The bars that we’ve partnered with to do pop-ups have all kept in touch, and some have even invited us back to help them develop their new cocktail menus.”

Despite their passion to instigate sustainability in the industry, they weren’t seeing as much change as they hoped. “Some would take on the recipes and some would simply go back to their regular way of doing things,” Ramage recalls. “We were really only seeing some small changes happening in some of the bars that had really taken our ethos to heart.”

Challenged by a zero budget, the duo recognised a partnership with larger brands could be the solution. “We needed to make the recipes more proven in a bigger-scale environment and collaborate with a bigger brand to make the platform easier to access, read and implement,” Ramage explains. The Green Hustle campaign developed by Absolut Vodka presented alongside the pair at the Athens Bar Show in 2018. Besides promoting sustainable recipes, the initiative enlists a similar approach to Trash Tiki and encourages sustainable practices in the industry.

The meaning of entrepreneurialism

Launching Trash Tiki was uncharted territory for the duo. “As with opening any new business, especially one that to our knowledge didn’t have another model to be compared to, it was very much a ‘let’s see what works’,” Ramage says.

No challenge too great, they took the plunge, relocated to Toronto and launched their umbrella company The Trash Collective. One project includes Ramage’s recently launched Common Sense Bartending, an online resource which encourages bartenders to waste less and utilise resources.

Along with her entrepreneurial talents and sustainable ideals, Ramage is utilising her bartending experience in a new project. “This year, we’re opening our first bar in Toronto. That will have all of Trash Tiki’s ethos and recipes in place,” she says. Ramage plans to maintain Trash Tiki’s philosophy within the venue which she refers to as “seeking to reconnect cocktails with the land they come from.”

While Ramage continues to focus on sustainability, she believes there is still much more to be done. “We’re acutely aware that as our industry stands right now, it is still male-dominated,” she says. Yet Ramage’s attention falls on local concerns as well. “Our commitment to community will extend to all demographics,” she adds. The business aims to tackle local employment issues by recruiting staff in need of experience.

“It can be easy to live with these issues as a ‘part of the game’, but those that see a different way or a way of inspiring people to change … that is where the true creativity and ingenuity comes through,” Ramage says.

We’ve no doubt Ramage will showcase her own Tiki creativity and individuality when she joins the ten other finalists in May on a trip to Cuba to find out the winner of the Havana Club Bar Entrepreneur of the Year.