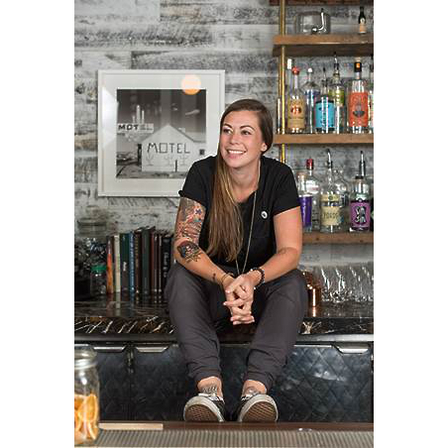 Kaitlyn Stewart, bar manager at Vancouver farm-to-table restaurant Royal Dinette and 2017 World Class bartender of the year, grew up in hospitality – almost literally, in fact. Her parents met while working at Canadian steakhouse chain The Keg, and if nursery or school was off, she and her sister would go into the restaurant for the day.

“Mom would be counting cash in the back, and we’d be colouring or reading or whatever we were doing at one of the booths or the tables in the restaurant before it was open, and they would do a handover when my dad came into work,” she recalls.

But Stewart didn’t start work in the industry until she entered university. “My entire life I danced and played soccer,” she says. “Those are my two passions in life.” She represented Canada in tap and hip-hop dance competitions, performed in commercials for McDonald’s, Coca-Cola and more, and had small roles in movies and TV shows.

Stewart’s aim at university was to move into filmmaking. “I wanted to really learn about what happened and what went on behind the camera,” she says. “I knew that I was going to be doing something within the arts, whether it was dance related or film related. But then I found this whole bartending community of doing competitions and stuff like that – and I was able to spin that artistic side of me, the acting and being creative, and put that into competitions. I realised that you could actually make this a career.”

Unusually, even for Canada, where the drinking age is 19, when Stewart first started bartending she didn’t touch alcohol. “For me, it was really important to study the classics because I knew I could taste my citrus juices, I knew I could taste my modifiers, but if I followed the classic recipe to a T I knew that cocktail was going to come out perfect every time,” she says. “So now when I’m creating cocktails, I have that same mentality about it.” Her recipes are clear, easy to follow and deceptively simple, using uncomplicated but precise measures – tailormade for the sober bartender.

While Stewart and her dad might share a tequila or a Scotch, neither her mother nor her sister drink alcohol. “I’m much like my mother in the way that I am the exact same person after a couple of drinks as I am sober, so I never needed that liquid courage,” she says. “When I started university, I was 18, 19 years old, and you don’t really appreciate the taste of alcohol. So the only reason why I was drinking was to get drunk. And for me that wasn’t a good enough reason so I stopped drinking and I kind of said to myself, ‘Alright, let’s see how long I can go without drinking.’”

Even today, after 15 years in the industry, Stewart is not a big drinker. “I don’t ever really drink cocktails at home and even when I’m out cider is my go-to, or a nice glass of wine,” she says. “I appreciate a well-crafted cocktail but I actually don’t drink that much for a bartender.” She can’t remember when she last had a hangover but hazards a guess that it was at least a couple of years ago.

Stewart started her career at Sharky’s sports bar in Toronto, and went on to work nightclubs, chain venues, and the occasional smaller place. But it was only when she helped open Boulevard, a sleek hotel restaurant-bar in Vancouver, that she really fell in love with the cocktail.

“It was the first time I truly had a bar mentor,” she says. “I worked under the bar manager, Justin Taylor, who’d been a Vancouver name for a few years prior to me working with him, and he was the first person to show me this whole other side of bartending and the cocktail world – that it’s a craft, and you can create stories, and take flavour profiles to a completely different level.”

It was Taylor, in fact, who entered Stewart into her first ever cocktail competition. “I didn’t even know they existed until I met him, and he kind of threw me in there, and basically said, ‘You’re doing this.’ And I said, ‘Do I have a choice?’ And he said, ‘Nope,’” she recalls. “I thank him so much for showing me that world.” Competing inspired her to see bartending as a career, rather than a way to earn money to support her other passions.

Winning World Class, Stewart says, has changed a lot but also enabled essential elements to stay the same. “It’s brought a bit of validation to this career that I’ve chosen and this path that I’ve taken,” she says. “It was really cool to give myself that validation: alright, I’m on the right path, I’m sticking to my beliefs, I’m sticking to my guns, and it’s gotten me this far and I’m doing something right.”

While the travel pace is less intense than last year, when she hit 14 countries in two months, Stewart is loving the chance to see more of the world and meet other bartenders but remains firmly attached to Royal Dinette. “I helped open it, so I think I’m the longest standing employee here currently,” she says. “I’m pretty passionate about the place because they’ve been super, super supportive of the path and journey that I’ve taken with bartending.”

Wholesome and Canadian as the day is long – she actually uses the word “heck” – Stewart rocks an impressive array of quirky, colourful tattoos. “I stopped counting them individually, because they’re kind of pieces now,” she says. “A lot of them have a personal meaning. I have a tattoo of one of my favourite cats that I ever had in my entire life on my arm and I actually have a tattoo that says, ‘Call Mom” on my arm because my mom gives me heck for not checking in as often as I should.”

Impressively, she manages to combine her passion for cats with working bartending hours and travelling nationally and internationally. “I have two cats – my girlfriend won’t let me get any more than that,” she says. “Jack is a big orange fluffy guy: I just gave him a haircut to look like a lion. I have a tattoo of him on my leg but he’s in a space helmet and it says ‘Ground Control to Major Tomcat’ around him. And then I have Goose, and she’s really cute.”

And, while she may have to remind herself to call her mother, family remains a big part of her life. “My mom hasn’t drunk for 37 years and she loves when I make her non-alcoholic cocktails, and she loves bringing her friends to come and see me at the bar,” Stewart says. “She’s such a pusher that way, she makes them drink all the drinks because she knows she’s the designated driver: ‘Oh, try this one, this one looks fun,’ or ‘Try this one, I saw this one on Instagram.’”

And family, and the unquestioning support they provide, have played a big part in Stewart’s success. “I’ve been super lucky that I have parents and family members that work in this industry or have worked in this industry and they’ve never pressured me to change my career to something more valid or something that’s valued more,” she says. “I’ve always had such amazing support from them that I’ve never felt like I need to move on from bartending.”