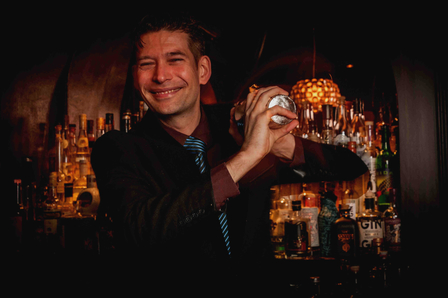 Perhaps the Netherlands’ most influential bartender, and the presiding deity of Amsterdam’s most celebrated bar for nine whole years, Timo Janse is busy with a capital B. When we spoke on the phone, he was on his way to sign papers for a new bar he’ll open with Tess Posthumus in mid December; he had just heard they’ll also be running a new pop-up; they had just soft-launched the Netherlands edition of this very website; and, amid all this, he was preparing for Bar Convent Berlin.

Janse and Posthumus bid farewell to Door 74 earlier this month, ahead of a planned closure and renovation. “It was a legendary shift,” he said. “We had a license to continue until whenever we wanted – as a bar, we’re allowed to do that six times a year. I was wearing a penguin suit, and Tess was wearing a shark suit. It was our busiest night at Door 74 ever, both in terms of visitors and revenue, and we got some really nice gifts, so it was a really nice closure, ending it on a high.”

While he admits that it will be hard to walk into the bar that he managed for almost a decade without feeling the urge to check cushion plumpness and painting alignment, Janse has zero regrets about leaving. “After nine years, you should have done what you wanted to do,” he said. “If you haven’t done it by then, you probably wouldn’t anyway, even if you’d stayed longer.”

Janse’s career has evolved in tandem with the Netherlands’ exploding bar scene. Driven by a passion for knowledge and an urge to improve the bar industry in his homeland, he’s written for a wealth of newspapers and magazines, created the Perfect Serve Barshow and helped start Amsterdam Cocktail Week.

Launching a Dutch version of Difford's Guide – with English-language content – was a natural next step. “Difford's Guide has always been held in the highest regard in the Netherlands,” he said. “It felt like now was the time to tie together all the activities I was doing, reach out further, and delve deeper into things from a knowledge perspective. If we’d done it six years ago, there simply wouldn’t have been that much to write about.”

Janse and Posthumus’ new bar, which will most definitely not be a speakeasy, will have an educational angle too. “In the Netherlands, we’re happy that there are quite a few bars doing cocktails now,” he said. “But we felt that a lot of people are forgetting about the classics, particularly young people… What we want to build is a consumer base that can go to other bars as well and say I would like a Daiquiri, or I would like a Manhattan, a consumer with an understanding.”

Their pop-up venture will be quite the opposite. “It’s a really cool location, inside of the Melkweg (Milky Way), and we’ll run for three months, every Friday and Saturday with the exception of the Amsterdam Dance Event,” he said. “It’s going to have much more of an 80s theme, with lots of colours and neon, very 80s style.”

Posthumus is leading the design, which is usually how things shake down between the pair. “From her background with studying PR, Tess is much more active and socially savvy, so she usually takes up the PR role; with my background in economics, I tend to be more on the numbers and operations side of things,” he explained.

And, like most of the best partnerships, the relationship is strictly business. “We work really well together, we travel and guest bartend together, we have a great friendship, and one of the reasons it works is that there’s no chance of it becoming romantically involved,” Janse said. “My mum tends to think there’s still hope for us, but Tess is very, very happy with her current girlfriend.”

Fiercely intelligent and impressively fluent in English even by the elevated standards of the Dutch, Janse is seriously into his numbers. He has calculated the number of cocktails he has made over the course of his career – by now in the high six figures – and even on his very last night at Door 74 he didn’t take his eye off the revenue. “I pride myself on still being the fastest person in the bar, and I’m very much concerned with the financial success of the bar,” he said, adding, perhaps gratuitously, “I’m not the type of person that goes on holiday.”

Insanely, in fact, Janse’s original game plan was to become a financial accountant. Both his parents are academics – his mother is a professor of Italian, his father teaches chemistry – so, coupled with crazy high test scores at the Dutch assessment exams, university was pretty much a given. “I didn’t know what to do, but I recognised the term ‘economics’: I just studied something that would have use and I could get a job with,” he recalled. “I got my bachelor degree and decided to do a master’s in financial accounting, and that’s when I found out what an accountant does all day, and that sounded horrid to me.”

Janse had enjoyed the bartending shifts he worked at college and within a year and a half of going full-time he had worked his way up to running the bar at the boutique College Hotel. But that didn’t mean telling his family he’d dropped out of university to pursue a career in bars was easy.

“Even if you go right back through my great grandparents, I’m the first person in my family ever to have worked in the service industry,” he said. “I kept vague about how college was going, even though I’d officially quit. I was waiting for something to show my parents, an achievement, and finally I could show them this beautiful hotel bar.” His family took the news well, pleased he’d found a job that he enjoyed.

Janse is keen to point out that he’s not a quitter. Unusually for a top-flight bartender, he has worked full-time in just three venues, and the first move came about by accident. After a couple of years at the College Hotel, he had racked up so much overtime working 80- or 90-hour weeks that his employers forced him to take a couple of months’ paid leave. “As a manager, you can’t really do that, you have to be in charge of the ordering,” he said. “And I can’t just take time off, I can’t not do anything - I need to do something! - so I started bartending at Feijoa.” The bartending gig became a job, which led directly to his role in opening Door 74.

While Janse is passionate about knowledge and his craft, he’s also crazy competitive – and cocktail competitions provided the perfect outlet. “As a child, I was a very sore loser: I’d throw things around, start kicking and screaming,” he said. “One of the things I had to learn doing cocktail competitions was how to lose.”

Although he is already involved in organising cocktail competitions, Janse does still enter challenges, albeit only ones he hasn’t won yet. “I still love to compete, but once I’ve won something I don’t go back to it: I don’t compete against myself,” he said. He feels the most rewarding awards to win are the ones you achieve as a team, whether that’s a listing on the World’s 50 Best Bars or awards for the best cocktail bar in his country.

Today, Janse is facing the challenge of building a whole new team, two new venues and a publishing brand, on top of a bar show, a cocktail week and sundry consulting gigs. How much sleep does he need, I asked, expecting a Trumpian five hours, or a Thatcherite four.

“Oh, I’m a big sleeper! I really appreciate eight hours’ sleep… and if I have a day off, I don’t mind sleeping for 12 or 13 hours in one night,” he replied. “If I’m really tired – and a lot of the time I’d be working 12 to 16 hours at Door 74 – I’m able to fall asleep while riding a bicycle.” And so, in a city with almost as many bicycles as people, Janse is, in this, as so much else, an anomaly: travelling on foot, or by taxi, and carving his own path.