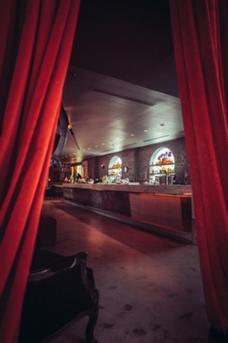 If Baz Lurhmann ever has to do a hospital-based musical film (it's always possible) then we reckon the set won't look too different from the interior of Albert Trummer's new venture, Drogerie.

Bringing a sense of the theatrical and the medicinal to South Beach, Albert has livened up a corner of the Albion Hotel with no end of velvety drapes and chemically enhanced wall decorations, adding a much-welcome shot in the arm to the Miami cocktail scene.

Like human versions of the White Rabbit from Alice in Wonderland, Albert's team scurry around in crisp, bleached lab coats, helping the man himself create some pretty intense mystical mixological experiences. Favourites on our visit from the 'House Medicine Chest' were a Deal Closer - a blend of cucumber, vodka, Chinatown Aphrodisiacs, mint, fresh lime and vanilla essence - and the Saffron Sazerac, which has bourbon infused with top grade Spanish saffron as its base and wows with its sweet subtlety.

In Drogerie, Trummer has created a compact little emergency room for all those Miami beach bar crawlers in need of something a little different. And much has to do with the man himself, who is on show every evening (at the moment, at least) persuading you to try his different herb-infused tinctures. Normal, it isn't. Fun it certainly is.