The Only Running Footman pub 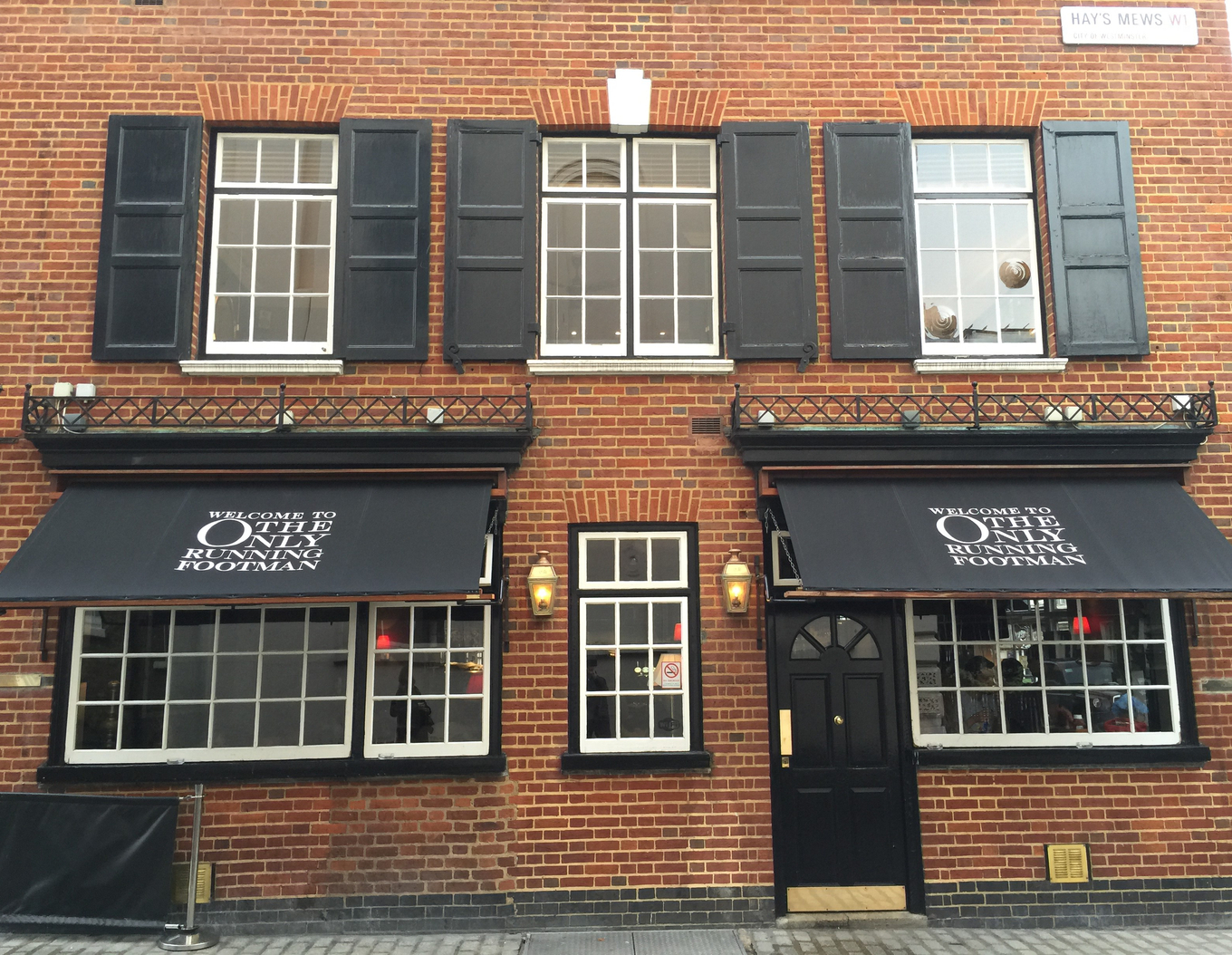 The pub was sympathetically refurbished after being acquired by The Meredith Group in 2006, adding private function and dining spaces to its upper floors. Downstairs is a cosy pub with drinkers gathering by the Georgian bay window at the front and some 24 diners seated at the crisp white linen covered tables at the back. Plush leather banquettes, red shaded lights against white walls and a forest of polished oak creates a very cosy feel.

All three of the traditional ales offered on hand-pump appear always to be at peak condition but being a pub for gentrified types, it's the wine list that impresses the most, stretching from affordable new world wines to Ier Cru Puligny Montrachet at £165, with around 20 available by the glass.

Opening to serve its highly regarded English breakfasts at 7:30am, this pub's reputation for food competes with many of the nearby upscale out-and-out restaurants, and indeed a meal in the pub's first floor dining room is a restaurant rather than pub experience - although a hearty ale to accompany your meal remains on offer.

Origins of the name

Besides its good food, plush interior and Mayfair location, this pup is also set apart by its name. Once, "I am the only Running Footman", its 24 characters made it London's longest pub name.

Back in Georgian London, the gentry employed footmen to run ahead of their carriages to ensure unimpeded progress through London's overcrowded streets, the footmen paying tolls ahead to the carriage's arrival and clearing animals, carts and other obstructions from the narrow streets. As well as lighting the way ahead at night by carrying a lantern.

The "Running Footmen" as they became known were also something of a status symbol for their employers and were usually at least 6ft tall, fit and handsome. They were well-paid, around the equivalent of £60,000 a year, with tips in today's money, and well-presented with an expensive uniform provided, and would be housed within the household. Footmen were close trusted aids and would frequently be sent with important messages and to run errands.

The aristocracy would also often pitch their footmen against each other and on 30th July 1663, Samuel Pepys recorded in his diary:

"The town talk this day is of nothing but the great foot-race run this day on Banstead Downes, between Lee, the Duke of Richmond's footman, and a tyler, a famous runner. And Lee hath beat him; though the King and Duke of York and all men almost did bet three or four to one upon the tyler's head."

Another notable account of Running Footmen in The Survey of London involves The Marquess of Queensbury who tested the agility of perspective footmen by having them dress in the uniform he provided and then watched them run back and forth along Piccadilly, timing them from his balcony. After watching one the Duke is said to have shouted "You'll do for me", the candidate is said to have replied, "and this" (pointing at the gold braided uniform) "will do for me!" He then demonstrated his swift of foot again by running off, still wearing the Marquess' uniform.

The pub, originally merely called the Running Horse, was frequented by such footmen employed by the neighbouring households of Mayfair. After the enforced clearance of the Great Fire of London, the city's street's became more reliable thoroughfares and so running footman were no longer required. The pub's change of name came about after one such footmen, seeing the demise of his profession, bought the pub and renamed it after himself. 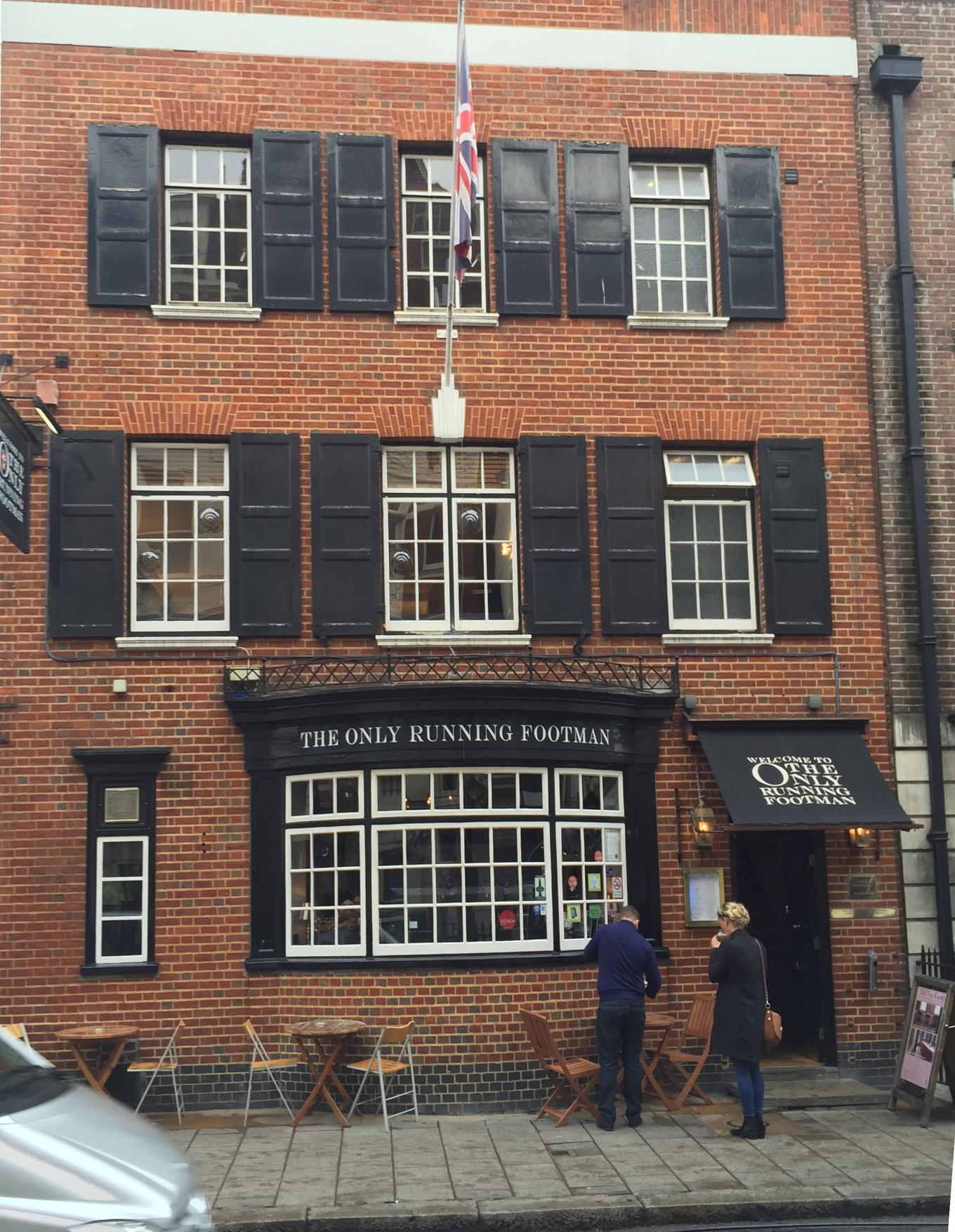