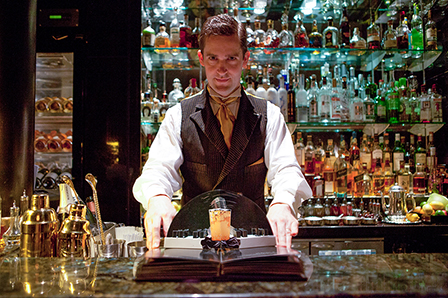 No longer the secondary bar at The Savoy hotel, The Beaufort Bar has established itself as destination spot in its own right. From the plush dark setting, to the space's iconic history, its live music and balanced drinks; this is a bar emerging into its heyday. Now the Beaufort Bar's new menu has launched to spectacular success in the innovative form of an elegantly designed pop-up book.

It was last spring that head bartender Chris Moore was rummaging through the hotel's archives when he found the restaurants menus from the first half of the 20th century. Lost to history and buried away were daily-changing menus with stunning illustrations. The hotel had even commissioned famous artists and illustrators such as Edmund Dulac for these bespoke menus. 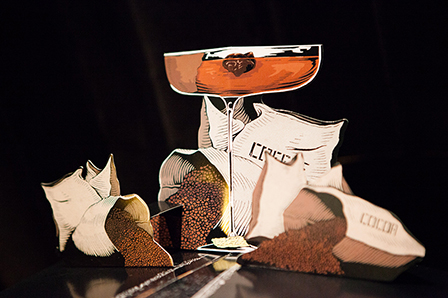 "These menus were printed each day and dated with artistic designs on them. It was just the quality people expected of the hotel at the time," says Chris.

Inspired by his discovery, Chris remembered a conversation with Alex Turner, about pictures in menus making people order cocktails. What came to mind were places such as TGI Fridays but Chris knew he could tackle the challenge in true Savoy-style. The team decided they wanted the menu to come to life with images and the pop-up book was born.

"We feel like after four years of being open that we've got the complete offering. This menu finishes the concept of the Beaufort Bar," says Chris. 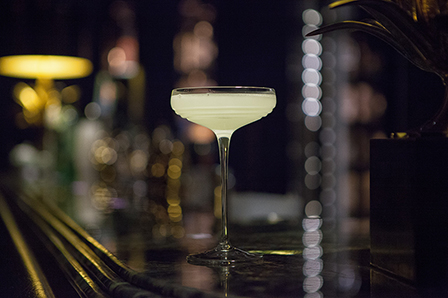 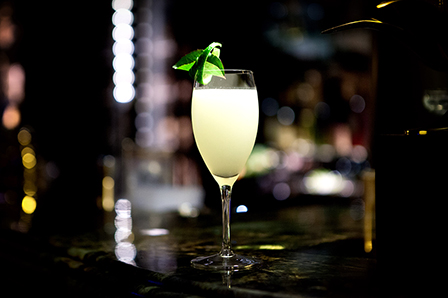 This drink has been on the menu for three years and, says Chris, represents the bar well. The team collect fig leaves from the garden outside the hotel to make syrup, which is combined with spiced Martini Blanco and shaken with gin. During the winter months, when the leaves stop falling, the team use dried ones they collected in summer. 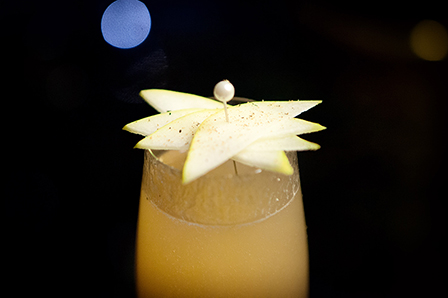 A light fresh champagne drink. When the bar opened the first thing they sold was champagne. Today their offering is a little more rounded, but this drink harks back to that fizzy wine-era. Liquorice root syrup is combined with elderflower, fresh pears, lemon juice and thrown with champagne. Grated tonka bean on top extends the natural earthiness of the drink. 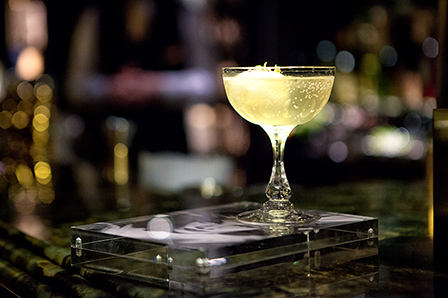 The menu has four character drinks dedicated to the rich and famous. This is their first, for Marlene Dietrich, a German-American actress and singer, who stayed in hotel. The check-in card was discovered with orders to leave champagne in fridge and Marlene was famous for sucking on lemons between shots to keep her cheeks taught. The team have combined these eccentricities of hers to make cocktail including Bombay Sapphire gin, a homemade botanical cordial and Cointreau, all stirred down with a ball of lemon sorbet and served on a framed picture of that very check-in card. 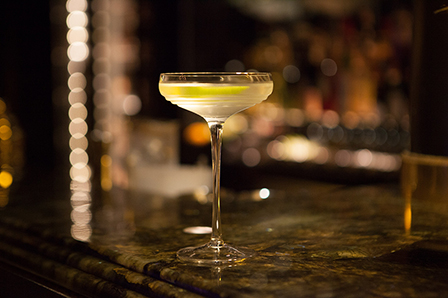 This is the all-pleasing drink made with Bacardi Superior. Cocchi Americano, fresh lemon, pineapple, a touch of orgeat and orange bitters. Chris was inspired to make this drink after visiting Bacardi's Mexican distillery where they cut down fresh lemons from the trees, and blended their juice with pineapple and rum. It's a well balanced, easy to replicate drink which everyone loves. 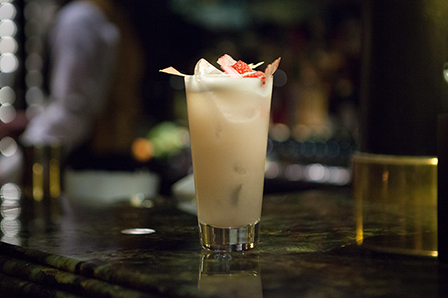 This cocktail is a fruity vodka drink with an added dash of rebellion. Grey Goose combines with a dry aromatic French white wine, lemon juice, rhubarb honey and raspberry syrup with egg white for texture. The rebellion comes in the form of a dash of absinthe. Garnished with ribbons of fresh rhubarb. 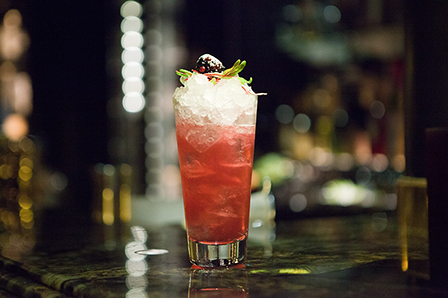 The tequila here is combined with a blend of different liqueurs fortified with gin and shaken with fresh lime juice, hibiscus tea and homemade grenadine. 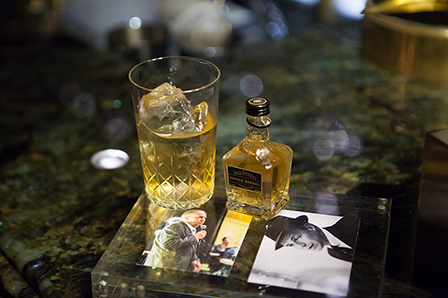 The second character drink is based on Frank Sinatra and is Chris's personal favourite pop-up page with a beautiful piano and vinyl record. Frank Sinatra, and his son, Frank Sinatra jnr, have in fact played in the Beaufort Bar. Jack Daniel's single barrel is stirred with Benedictine, orange bitters and Cocchi Americano. Served on a frame depicting both men singing in bar. 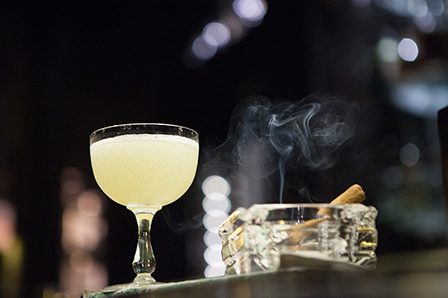 Another character drink, this time for that most inspiring of writers, Ernest Hemingway. Bacardi is combined with lime juice, castor sugar and absinthe. Why? Because the great man drank absinthe in Paris and daiquiris in Havana. Served on a copy of his beautiful and succinct story of The Old Man and the Sea. 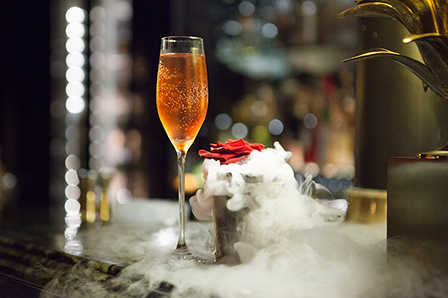 Not one of the bar's character drinks but dedicated to Monet who once said London would be beautiful if it weren't for the fog. Raspberry violet liqueur is topped with rose champagne and served in a julep-style cup with dry ice atomising the smell of roses and giving that foggy atmosphere the capital is still famous for. 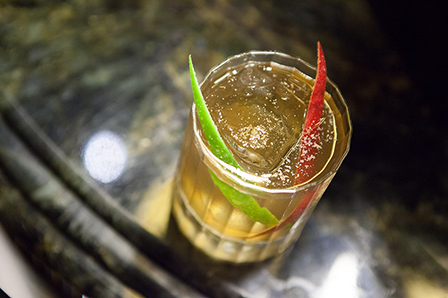 This is a drink Chris had worked on for a long time, struggling to pin down the exact flavour of juicy, ripe apples. The eureka moment was a combination of honeycomb and mead liqueur, calvados, whisky, a blend of two sherries and served with green and red apple twists as well as grated star anise. 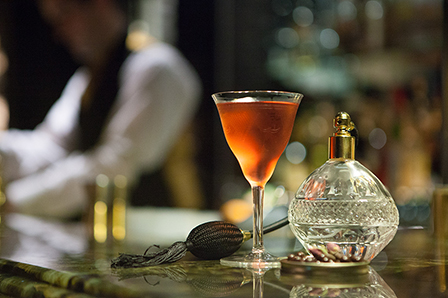 A drink for that famous designer Coco Channel. Seeing as she was quintessentially French, the cocktail is based on red wine, Lillet Blanc, - which interestingly enough has some of the same aroma compounds as Channel No.5 - Grey Goose and spritzed with jasmine and rose. 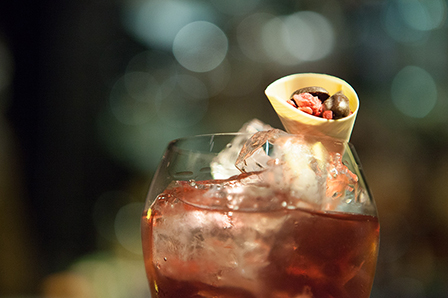 This is a stirred tequila drink using cherry and almond as well as chipotle bitters. Chocolate beans flavoured with coffee act as the garnish and eating them subtly changes the flavour of the drink, starting rich and getting drier. 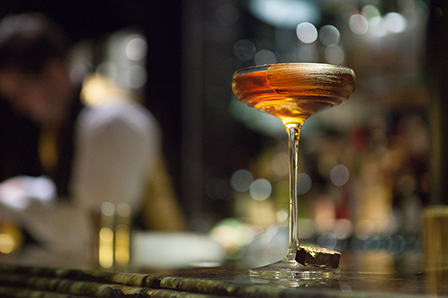 This rich cocktail uses a blend of rums with Branca Mentha, maple syrup roasted coffee beans, Amer Picon, and a few dashes of Angostura bitters. The chocolate, orange and mint flavour combine beautifully and the outside of the glass is brushed with a rich dark chocolate sauce. 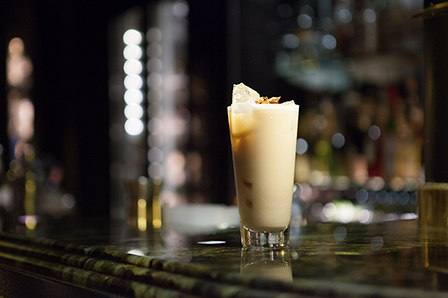 This is a simple pun on the classic flavour combined of rum and raisin. 8-year-old rum is infused with golden raisins and sugar for two weeks before combining with pecan milk, cinnamon honey and garnished with raisins, star anise and nutmeg.