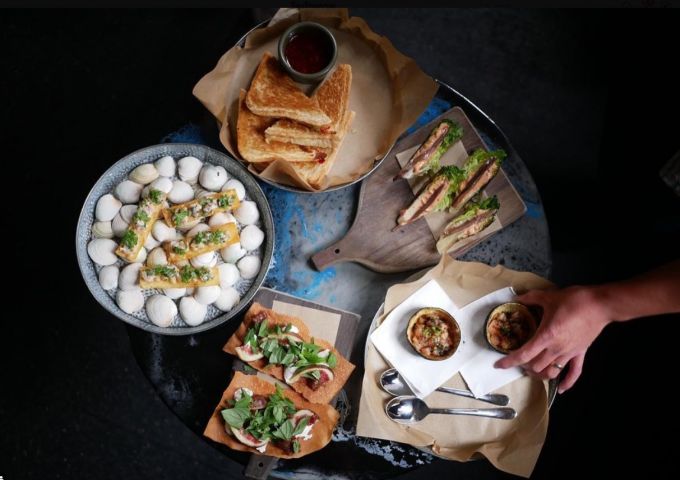 Over the past nine months Skittle Lane’s PS40 has had a rotation of illustrious chefs cooking in the bar each Tuesday, resulting in rich snacks, salty slushies, and seriously good vibes. There’s been baller menus from Rockpool, caviar shots from Juicy Banana, a sneak preview of Paddington’s Porcine and kangaroo tail jaffles from Momofuku’s old sous chef. They may not have invented the pop-up or the takeover or even doing things on a Tuesday, but they have shed a little light on the perfect dynamic between the bar and the kitchen.

It’s July 2020 and Sydney’s CBD is dead. Bars and restaurants are slowly reopening – but not all – and there’s little revenue to be made during the week. Michael Chiem, owner of cocktail bar PS40 is reluctant to bother opening on Tuesdays at all. “The bar wouldn’t be very busy, Sydney is dead, it’s not really our kind of day and I guess we’re a bit more of an occasion-style bar as opposed to an everyday-style bar. So that’s when we hit up our first Tuesday chef,” he says.

Chica Bonita’s chefs were the first to come in, working in the old soda prep space now that PS40’s soda business has moved out. There’s not much in the way of a kitchen here either, apart from heaps of stainless steel, space, and two inductions. Forget luxuries such as an exhaust hood. “It’s on the chef to be quite creative with their food for this reason,” explains Michael.

The way the night works is fairly simple; there’s two sittings, one at 6pm and one at 8pm. Guests book ahead and are greeted with an arrival cocktail before being brought a slew of snacks. “It should be like a taco,” says Michael. “The last few weeks the food doesn’t resemble tacos at all, but the idea is a taco is the perfect vessel for holding and drinking at the same time. One hand eating, one hand drinking.” 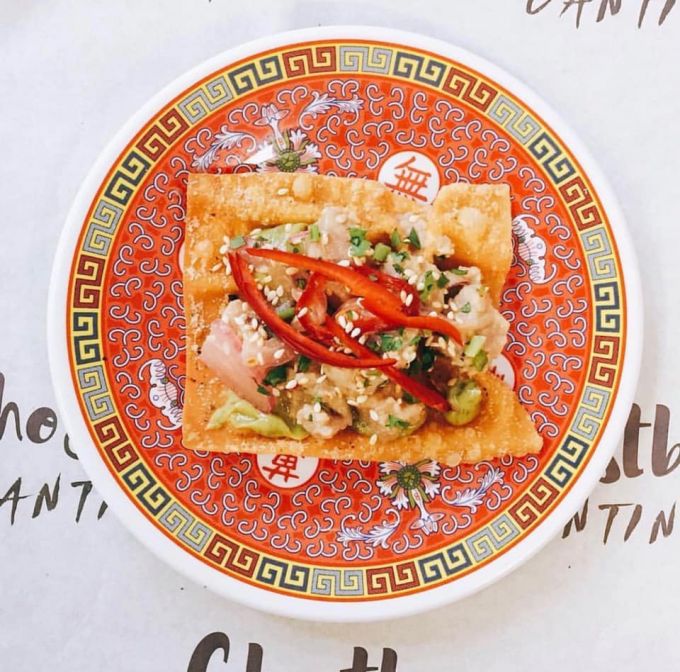 Right from the get-go the Tuesday takeovers came with a feeling that each week it’s a once-in-a-lifetime opportunity. Chica Bonita would never reopen their CBD restaurant, so the last tacos from the talented chefs you could have eaten south of the harbour bridge were in PS40. When Rockpool came in they ran it as a marketing exercise and put together a menu that cost $39 a person to make but charged only $40 to the customer. It’s an almost certain truth to say you’ll never eat so well and so cheaply in Sydney again. Baba’s Place, now also closed, bought their Marrickville house-party style with a DJ for the night, tempting everyone to have a go at chair dancing (remember restrictions?).

It’s clear what PS40 is getting out of this – they’re hella busy on Tuesdays now, and most people who come have more than the arrival drink. The chefs take all the food profit and that leaves the bar staff to get on with serving their tasty cocktails and slushies and helping run food. As for the chefs, “apart from the monetary side of things, a lot of these chefs might be cooking the same food repetitively over a very long period of time, so this is a creative outlet for them, to come up with something different, in a different setting, maybe food they like eating rather than head chefs are making them cook,” says Michael.

Where most pop-ups tend to be unknown chefs testing out concepts, PS40’s has consequently become a pop-up of established people, getting a break from their normal kitchens and menus. 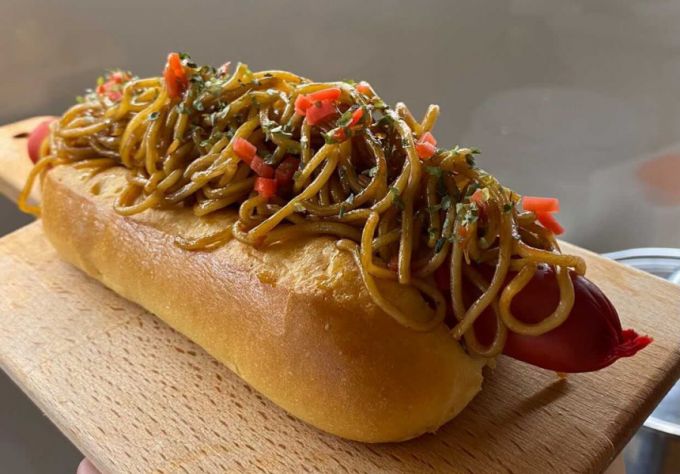 So, the bar’s happy, the chefs are happy and guests are tipsy, full and merry. They’ve eaten well, in fact very well, but they’re not too full, they’re not jean-button’s-bursting, belt-hurting, over-indulged full. And, most importantly, they’re not in a white-tableclothed stuffy environment where the likes of a salted Pina Colada and watermelon Daiquiri Miami Vice served in a milk bottle with a cocktail umbrella feels out of place. In fact, the Miami Vice feels like the correct level of fun and silliness to be enjoyed alongside Juicy Banana’s béchamel, noodles and Bolognese hot dog. This is fun food to be eaten in a bar alongside fun drinks, which probably means that Michael and the PS40 team have cracked the elusive cocktail pairing far better than any Michelin star restaurant.

“I don’t think pairings are super necessary. So many people are different, that to have a set pairing doesn’t feel right for us. We have a small menu with two slushies, being super cold that works with the fatty food elements, and Africola is something you could finish with and then we like to have something acidic there too, we’re doing a Gimlet at the moment.”

Forget matching or mirroring the flavours on your plate to the flavours in your glass – cocktails aren’t wine, and they never needed to be. The ultimate cocktail and food pairing might just be bringing talented chefs and an induction hob into a bar and letting each element do their thing without the trappings of formality. “We very rarely have much cutlery, it’ll be a spoon or chop sticks but predominately eat with your hands, it’s cocktail vibe. We have to make sure people are having a good time and I feel like once you put a knife and fork in front of someone it almost disables you a little bit,” says Michael. 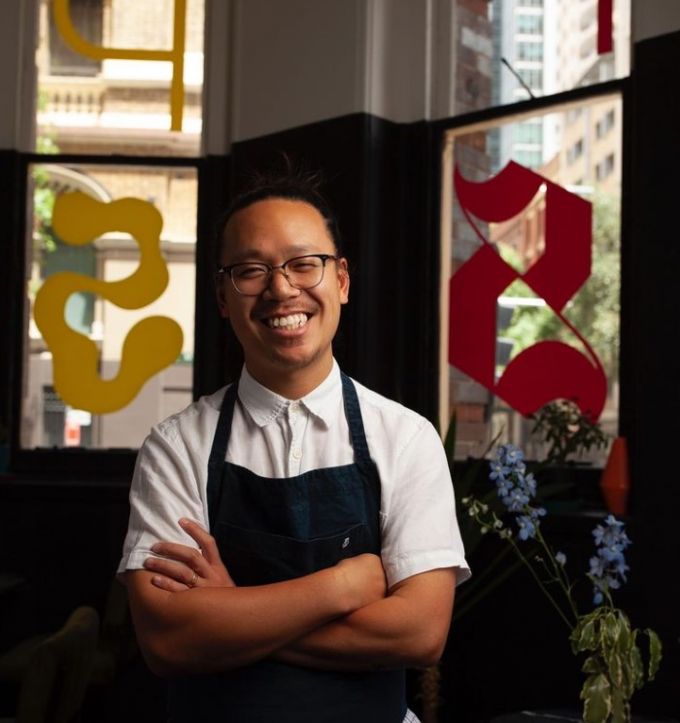 Originally the team were changing the first cocktail with each chef, but they’ve now landed on what Michael calls the perfect arrival drink. To note, he’s not wrong, this drink is ideal to refresh, reinvigorate and excite you ahead of the meal. The Ritz uses gin, a small amount of yuzu sake, dry sherry, macerated strawberry covered in apple cider vinegar and verjus from the Hunter Valley – that’s all carbonated, poured over ice in a wine glass and garnished with an apple spiral.

“Now that it’s taken off a bit I thought I should invest in kitchen equipment and whatnot, and the other side of me thinks that will just overcomplicate things, it could take away from what’s made this so successful. It should be easy for the chefs to execute their food on the day, because they should be here, having a drink, relaxing, enjoying themselves and not trying to cook the most over-complicated food and just constantly sweat bullets. You’re meant to have a really nice, fun time and if the chef is having a fun time then everyone is having a fun time,” says Michael.

Each Tuesday, from July 21st 2020 right up until this week, has undoubtedly delivered that great vibe Michael was hoping for. “Generally they pack out, and at that 8pm period when people are leaving and others are waiting to come in, it feels like people are waiting for a show, like a version of a music gig but it’s just a chef cooking food.” 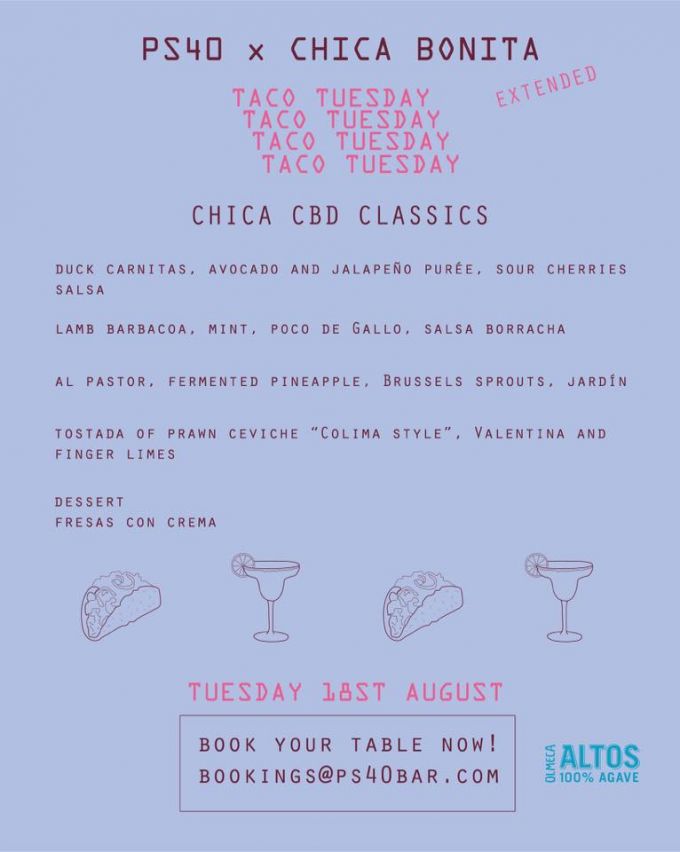 From the beginning, Chica Bonita's takeover

So far Michael has been friends with every chef that’s come in and cooked. Which is daunting when he’s waiting for the bookings to come in – “it’s like having a birthday party every single week at McDonalds and hoping your friends rock up” – but eventually he’s going to run out of mates. Luckily that issue has solved itself with chefs now approaching Michael and asking to come and cook. One of those who’ve put up their hand is Firedoor’s head chef, showing just how exciting this bar dynamic has become for Sydney’s top chefs. In the works is now a bar snacks and cocktail book which will drop recipes from all the chefs that have participated, curated by Michael.

As for Wednesday to Saturday, “I think the takeovers are one night. Predominantly we are a cocktail bar. Now the fact the bar exists is spreading through more networks, so it has increased our trade over the other nights. I’ve been running the bar like its being going bankrupt and I don’t need to do that anymore. When covid hit I was like ok I’m working 1000 hours and let’s just make it happen. We’ve come out the other side and there’s no real need to do that anymore. Now we have the time to grow.”

PS40’s takeovers are advertised on their Instagram – email bookings@ps40bar.com to grad a spot at the next one.