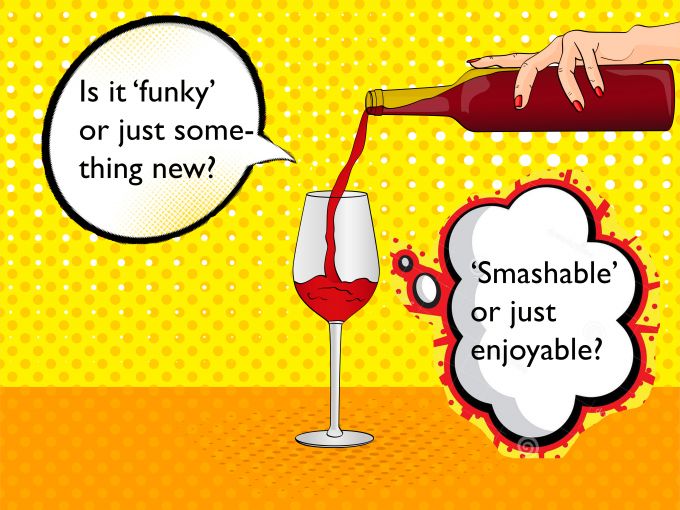 Semantic satiation is a psychological phenomenon in which the repetition of a word causes it to become meaningless. Here Jasmin Natterer looks at how the words we use in wine lose their ability to describe the experience of the liquid in the glass and encourages us to get creative instead of relying on tired expressions.

I like words. I always have, and relating them to something as sensational as wine is a favourite pastime of mine. It is a marriage of two great loves. It can be extremely rewarding to take something as ephemeral and subjective as taste and hurl it into the tangible world of words.

The problem is that the language around wine tires easily and is in constant need of renewal. All sommeliers at one point take refuge in their well-worn script. I confess I do sometimes – but I know in myself for this to be too easy, lazy and far less enjoyable. The risk is less but so is the reward. I’m not saying it has to be Shakespeare, I just prefer to really choose my words rather than parroting popular pundits or trotting out tiresome tropes.

There are a great many words that I love to employ when describing wine – words to elicit deep feeling, to make beautiful, to subvert or to initiate great anticipation – but there are also a handful of words I try to avoid. Why? Well, let’s have a look and see.

1. Funky
When I first started working with Natural wine, I struggled for a word that took the light-heartedness, the odd earnestness, the bizarreness, the infinite cool factor and the inherent electricity of Natural wine into account. How do I explain to people the taste of this style of wine that is groovy, avant-guard, stinky, psychedelic and spiritual? Then funky came along. It was the right word at the right time, but has fallen in my esteem of late to the point where it makes me wince. It has been hijacked and mistreated by so many and in so many different scenarios. Exhaustive use has robbed it of its essential cool factor, although I concede that the cool factor is lost more and more on me as I get a little older.

2. Smooth
Now this is a big one. For many it’s a safety word and a catch-all word which comes to generally describe a ‘good wine’. The problem here, however, is that because it is so broad, it comes to mean not much at all. My Mum likes a smooth red and, upon interrogating her as to what exactly that meant, I ascertained that she likes a red wine that is easy to drink, usually with a gesture of fruit, sometimes oak and a very muted tannin structure. I then asked her if she liked the roughness of the Loire Cabernet Franc we were drinking and she said yes, which confused me further. Smoooooth. Like the jazz you listen to in a coffee shop in an airport. You can want different things out of a bottle of wine for different moments in time – sometimes textured and spicy, rough and granularly, juicy and piquant or soft and oily. The displacement of the wave either side of the median is what gives a wine character and makes it precious.

3. Dry
Let me start by saying that if you partake of any formal tasting of wine, ‘very dry’ is a perfectly legitimate descriptor. In this context I have no issue. It’s in a social drinking scenario that I get a little suspicious of this word and what it signifies. ‘I would like a very dry glass of white wine’. I have a deeply unpopular theory that most people actually like a little fruit sweetness in their wine. This theory is corroborated by the juicy red wine craze we are seeing in Sydney at the moment – the tidal wave and tyranny of Ribena wine or ‘chilled red’. ‘Dry’ is often misused when people haven’t stopped to ask themselves: do I really like super dry things with absolutely no reprieve? If the answer is yes then I totally endorse the use of the words very dry, but if secretly the answer is no, then it’s ok. Next time ask for a fruity, lip-smacking Starburst of a wine and enjoy. Add sunshine and enjoy even more.

4. Smashable
The really horrible thing is that I think I had a part in this one. I was working in a back-alley wine bar many years ago and the bar owner suggested that we put a page in the wine list full of easy-to-drink, easy-on-the-wallet options. Great idea! But what should the header be? We tossed back and forth some ideas before landing on ‘Smashable’. I’m not suggesting that we created the word in the Natural wine sphere, but we definitely tapped something very early that was later to become a wearied resource. Crushable is an interchangeable irritant.

5. Organic
In a natural wine bar, this word passes eight out of ten lips at some point, sometimes in great love, sometimes in great hate, and often in great confusion. Organic is not an inherently terrible word but the confusion that usually accompanies its usage makes it problematic.

‘It isn’t an organic wine is it?’ – asked by a patron with a hint of concerned disgust in their voice.

‘Oh, well you see, it’s an organic wine, that’s why it’s like that’ – said hesitantly (or even worse, arrogantly) by a wine server as a blanket explanation for all a wines oddities and potential faults.

Both these statements involve a misuse of the word organic and they build upon each other until you have Frankenstein’s Monster! So just to clear things up…

‘Organic viticulture (like organic agriculture) aims to eschew man-made synthetic chemicals in the vineyard. It prohibits the use of pesticides, herbicides, fungicides and synthetic fertilizers and, instead uses plant-and-mineral-based products to combat pests and diseases, increase the health of soils, and help build plant immunity and nutrient uptake.’
– Isabelle Legeron MW, Natural Wine, (Cicco Books, London, 2014)

Making wine with organic fruit is a really a great start, but it’s not the whole story.

Popular words invariably gain momentum, reach their tipping point and then tire, calcify and loose potency. Sometimes they go into the momentum machine meaning one thing and then emerge from the other side, a little battered and bruised, meaning something completely different.

The challenge I would like to issue is this: if you care about your wine, then care about the language you use to describe it. Create new and interesting words to access the description of what you desire. I promise you the result will be delicious and the conversation engaging. With glass in hand and friends around, talking about wine can actually be just as much fun as drinking it.