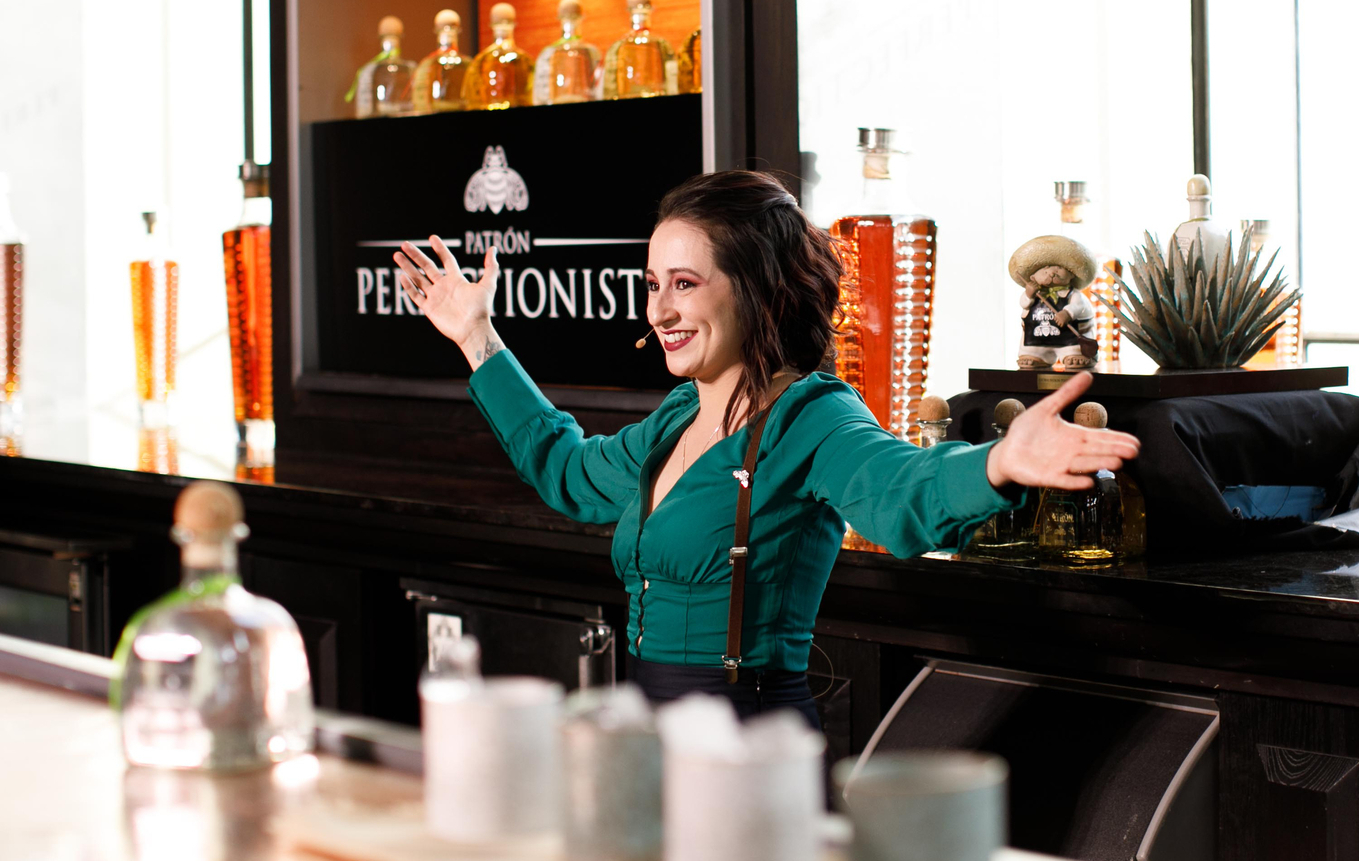 "I find my happiness in this industry. It's a way I can create something that connects people. We work too many hours, and we don't have normal weekends, we don't have holidays. When we take part in competitions we focus on it, we work and we study. We know it's a long process, but we feel it's worth it."

A native of Curitiba, also known as Brazil's green capital, Ana Paula Ulrich was named Brazil's Patrón Perfectionist champion in 2019, a competition that reaches bartending professionals from over 30 countries. Ana Paula describes it as "a great experience on sharing knowledge...you feel like you're with your family. It doesn't feel like a competition."

Head bartender at the Burle Bar in Palácio Tangará, São Paulo, Brazil, Ana Paula Ulrich grew up with her eyes set on an acting career. She took theatre classes alongside studies in design and a job in PR. But her ambitions shifted, she left her degree in design and landed a role as bar-back at a high-volume nightclub in Curitiba.

"The first things you learn is not about cocktails or mixing cocktails, it's about being fast and seeing what the bartenders need," she explains.

Naturally, for an ambitious professional with a passion for education, Ana Paula's knowledge of cocktails carried her through to bartender. Come 2017, bartending inspired a move to São Paulo.

And her family have been supportive of her career choice. "My family is super proud," Ana Paula says. "In the beginning they thought it would be temporary, they didn't think it would be my career. After I moved to São Paulo, they figured out it was a huge plan so they understood it was really important to me."

Ana Paula discovered the Patrón Perfectionists cocktail competition and felt inspired. "It was a beautiful thing to see in the cocktail world because you could see each global finalist was highlighting their culture," she says.

Inspired to compete and share her Brazilian culture, she carefully prepared. "Patrón Perfectionists was one year of work to create my cocktail and concept. You won't win a competition overnight, you need to focus and understand what the competition is about," Ana Paula says.

The name of her winning cocktail, Amanayara, refers to the calm after the storm. A word that originates from a native indigenous Brazilian language, Ana Paula connects it to "hope". She combines two common Brazilian ingredients, the jackfruit and cocoa honey, in her homemade ingredient the Optimist Potion. "We Brazilians are well known for our optimism," she explains. "If someone drinks this potion, the more hopeful and full of joy people will feel."

The Patrón Perfectionists competition encourages bartenders to share their culture, an aspect which resonated with Ana Paula. "Diversity is a highlight for sure. If you're in a workplace, diversity is very important. And this competition highlights diversity," she says. "Bartenders from different cultures bring their specific skills with varied work styles and for me that's beautiful."

Her success in the competition was a significant moment, in more ways than one. "It's a great experience on sharing knowledge," she says. "Especially, for many of the competitions in Brazil, most of the winners are men."

Arriving at Patrón's Hacienda for the global final, Ana Paula was welcomed by the team with open arms. "In the beginning, I was the only global competitor who didn't have a host. I didn't have anyone from brazil with me. For bartenders coming from non-English speaking countries, speaking English can be a big challenge," she explains. "The moment I arrived there...they adopted me."

While there can only be one global champion, Ana Paula bonded with her fellow Perfectionists. "It's different from other competitions," she says. "We shared stories over the fire pit, we were singing songs together, and we were sharing things from our countries and our cultures."

The competition has been an unforgettable experience. "When I got on the stage, for me, in that moment, I felt so alive. I was so colourful, I felt I was being myself with a contagious joy," Ana Paula recalls.

She's committed to her career and her local bar community. "The Patrón Perfectionists competition was only the beginning," she says. "It is a career game-changer. Some competitions you go and win and that's it. But for me, this feeling of being a part of a perfectionist family is about making a difference in my local community. How can I help in Brazil? What can I do right now in Brazil?"

Ana Paula is a serious bartender who champions education. "I've always studied how we can be better hosts to our guests. I learn a lot about expressions, and how you can improve your voice tone, and how you can communicate with your guests. For me, it's really important," she says.

For Ana Paula, it's essential to learn about the ingredients from a wider perspective. "I try to have a close relationship with people from the kitchen because we can learn a lot from them," she says. "We have plenty of different fruits that we only have in brazil, but we need to find a way to make them last longer, because of course, if you buy a fruit it only lasts two days, we don't want to have waste. So we need to learn a bit about how to make acids."

With bars closed due to Covid-19, Ana Paula has spent her time at home exploring her other passion. "For me, in quarantine time, I'm having an amazing time cooking," she says.

While the pandemic has been a huge disruption to livelihoods, and in particular, those in hospitality, as many rely on tips for a large percentage of their income, Ana Paula has taken a positive approach. "I try to take one day at a time, and I try to help other people," she says. "I have friends who have lost their jobs and they do not know what to do...I'm talking with many people on how we can create charity events without meeting each other and how we can help other people."

Yet, despite the turbulence of Covid-19, Ana Paula remains focused and dedicated to helping others by sharing her passions. "Hopefully, after quarantine, I will be able to help people connect again," she says. "For me, it's really important to share these things with other people from other cities, and of course, it's really important to inspire other girls to pursue their dreams."