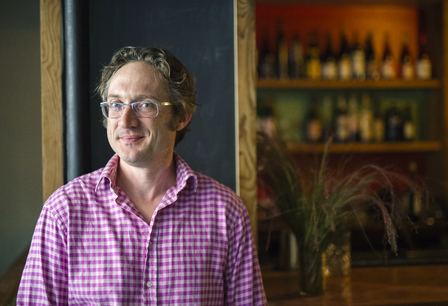 “It’s amazing how educated a bartender who wants to work in a cocktail bar is these days,” says Eben Klemm. At the turn of the century, when he segued seamlessly from science in Boston to bartending in New York, there was no real barrier to entry. “I have some friends who debate this, but there was nothing you needed to know. You needed to be a good bartender – and that was much more about speed and service. After that you could kind of make up your own way.”

Klemm himself isn’t short on education: there’s an academic precision to his speech which very much suggests the science professor he might have become had his life followed a slightly different path. A molecular biologist in his previous incarnation, he’s probably best known for his injection of scientific method into bartending, performing blasphemous feats such as proving that shaking style, shaker make and size of ice didn’t affect temperature or dilution very much at all.

“It’s not like a scientific cure, where the precise shake is going to make the drink perfect for every guest,” he says, citing the philosopher of science Karl Popper. “What I was most interested in was what Popper referred to as ‘falsifiability’… So: ‘My ice makes the best drinks because of X’, so why is that, and how do you prove that?”

What surprises Klemm about cocktails is how very unfactual they are: he describes both the flavour and the history of drinks as a ‘black box’, tech-speak for a system where you know what goes in and what comes out, but don’t know how the changes happen. (The term ‘molecular mixology’ irritates him because he feels nowhere near enough work has been done on basic cocktail chemistry to merit a word as science-y as ‘molecular’.)

“There are very few things that are measurable in cocktails, and I find that fascinating,” he says. “We can go ‘Hey, this is a well-made drink, and this isn’t,’ – we all agree on a kind of spectrum – but… when you’re getting to the last 5% of what makes something good or great, it becomes a little bit fuzzy.”

Klemm got started as a bartender on the cusp of the new century, and the cusp of cocktail culture too. After a stint in biotech doing repetitive things with genes and three solid years working with fruit flies in a lab at probably America’s most prestigious science university, MIT, he was edging towards burnout. “I was really bored of Boston and wanted to move to New York,” he says. “All my friends in Boston were happy in committed relationships, and all my friends in New York were unhappy and single, so I felt I had to be with like kind.”

Klemm had been interested in food and wine as a hobbyist, and was beginning to see the first signs of what would become the cocktail scene emerging. So he upped sticks for New York state, got a job in a bistro, taught himself to bartend, then moved to the big city and scored a gig at the Campbell Apartment, a historically themed bar set in what was once the opulent private office of a railroad tycoon. (It’s recently reopened under the auspices of the Gerber Group.)

Back in those days – despite Dale DeGroff’s pioneering work at the Rainbow Room – historical research wasn’t what it is today. “The owners had just pulled at random 12 drinks from the Waldorf-Astoria book without looking at the recipes or thinking about editing them and just tossed them to us,” Klemm says. “But I ended up really being fascinated by that and the history and doing research on those drinks. It was immediately busy and packed. I was trying to become fast and efficient, and deal with demanding midtown New York customers.”

Next up came Pico, a stylish Portuguese restaurant, where he could experiment with everything from edible flowers to, yes, molecular mixology. “I had pretty much free rein, because there were no rules,” he recalls. “I got to do whatever I wanted to do.” Creations like the Anne Hester – vodka, gin and marigold essence, topped with a foam of Campari and grapefruit – were ground-breaking, as Robert Simonson recalls in A Proper Drink.

Come 2003, Klemm pioneered another shift. The US cocktail scene was shaping up: Milk & Honey had been going several years, David Wondrich’s research was live on Esquire, Employees Only was about to open, and DeGroff and other luminaries were working towards the launch of the Museum of the American Cocktail. And so BR Guest, a conglomerate with twenty bars and restaurants across four US states, came looking for a next-generation bartender to upgrade its cocktail offer.

“I think I was probably the first person in New York to get a corporate mixology job,” Klemm recalls. “I went from one bar to twenty, and having to understand that there was a mainstream I had to acknowledge was an emotionally challenging experience.”

Yet the educator urge came through – and it’s still something that inspires his work. “I love teaching, and probably no matter what I ended up doing when I grew up I would have been interested in teaching,” he says. “I get to meet such a great range of different people who want to bartend… I’m delighted I don’t have to just train hipsters.”

After seven years in the corporate world, though, it was time to fly the nest. Klemm wrapped up at BR Guest in 2010, to brave the feast or famine world of freelance. He set up his own consultancy, Cane & Maple, which, despite the lack of a web presence – he’s even a Facebook novice – attracted an impressive clientele.

An attempt at owning and operating his own restaurant, however, was less successful. Klemm and a partner opened King Bee, serving modern interpretations of French-American settler food, to positive reviews in late 2014 – but it lasted barely 18 months. “Restaurants are like the first line in Anna Karenina,” Klemm says. (The book begins: “All happy families are alike; each unhappy family is unhappy in its own way.”) “All successful restaurants make money and all unsuccessful restaurants fail on completely unique terms.”

One key error he identifies – out of “several” – is proceeding without a full liquor license. “My partner and I were really proud of our wine list and I’m really happy that we had a year and a half just to immerse myself in that,” he says. “But I would never cut myself off from the complete beverage package ever again.”

Today, he’s focused on growing Cane & Maple. He consults for celebrity chef Wolfgang Puck, the Knickerbocker Hotel in New York, the Loews Hotels group, which has over 20 properties across the US and Canada, and the upcoming Los Angeles restaurant from star pastry chef Dominique Ansel. Ahead of a large contract he can’t talk about right now, he just partnered with craft cocktail veteran Michael Neff.

Cane & Maple’s work is pretty eclectic, if often intense: Klemm has opened half a dozen bars already this year, with more to follow. “A lot of people are very fortunate to develop [a cocktail consultancy] because they worked at a famous bar or own a famous bar and they get called on to reproduce their brand of cocktail,” he says. “I don’t have that. I have the good fortune to work with some places that are really doing cutting edge, very modern things. And I have clients that are just picking up the necessity of principles that craft cocktail people were working on in the early aughts.”

While much of his bread and butter is hotel bars, in particular training on classic cocktails, Klemm especially enjoys doing restaurant cocktail menus. “It used to be that anything you created was original and was menu-worthy, and now I think that finding a way to have a narrative or a story has become really important: it’s not just a set of cool drinks,” he says. While the menu for a taco bar will almost write itself – hello Margaritas! – more complicated concepts require a solid internal logic to generate an emotional pull. “Sometimes I have to just create narratives in my head that nobody will ever see… Like ‘What if the cocktail boom in which we’re living now had happened during Reagan’s era?’”

But, right now, what he’s most excited about is the transformation that’s underway in American drinks: not just in the elite bars with their educated staff, and the cocktail meccas with their ever-changing cast of drinking spots, but outside of the big cities. “There’s a massive trickledown of great cocktail ideas and innovations into the mainstream,” he says. “And I’m not talking from big city to little city, or from known cocktail destination to lesser-known one. We’re seeing more cool things in sports arenas, and airports, and other non-traditional classy cocktail venues.”

And, surprisingly, that’s something that a guy who made his name as a cutting-edge innovator is suddenly doing a lot. “Learning not to be a complete arrogant snob has been one of the skills that I was very late in developing,” he observes wryly. “But I’m finally coming around.”