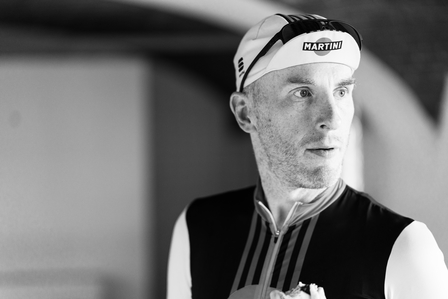 “I just wasn't very good at committing suicide, I think,” Healthy Hospo founder Tim Etherington-Judge recalls of his 2016 breakdown. “I had the intention of ending my life, but perhaps not the ability to do it. Or maybe it was just a call for help?"

In theory, Etherington-Judge should have been on top of the world. He had worked his way up from selling ice cream in a Cornish beach resort to the position of global brand ambassador for Diageo’s Bulleit bourbon. He was travelling for a living, drinking in the world’s best bars, dining out on the coveted corporate credit card, and working a role that’s a dream gig for many bar professionals. Yet he was also grappling with deep-seated mental health issues. And so, one night after the Athens Bar Show, he went back to his hotel room, downed a bunch of tablets with a bottle of whiskey and went to sleep hoping he’d never wake up.

As part of his recovery, Etherington-Judge made the decision to talk about his troubles, initially in a Facebook post. “I was in an extremely dark place and extremely lonely,” he recalls. “I was seeking messages of love and support from a post opening my soul to the world, thinking that those would make me feel better and help me get through this dark period.”

The response he got shattered his expectations. “There were hundreds of messages from people being very supportive and loving and caring, which was great,” he says. “But what I didn’t expect to get was hundreds of private messages from people telling me of their struggles with mental health and their troubles in the industry… You know, some extremely well-known and successful people were also struggling.”

On sick leave and going through therapy, Etherington-Judge started to research mental health within the hospitality industry. And the statistics he found were shocking. “We’ve got the highest rates of drug abuse of any industry in the world, the third highest rates of alcohol abuse,” he says. “Bartenders are more likely to die of alcohol-related disease than any other type of worker and bartenders are more likely to die at work than patrol police officers. It’s the 13th most dangerous job in the US. I was like: Why is no one really talking about this?”

Initially, Etherington-Judge started a blog chronicling his own struggles. Then, while working with Diageo to see whether his job could be adapted to better support his mental health (it couldn’t), he thought up a name, threw up a website and started to talk, funding Healthy Hospo entirely from his own life savings.

“Last year was all about just getting out there, talking to people, having conversations and seeing if people were interested in health and wellness in the industry or whether I was completely mental and no one was interested at all,” he says. “It turns out that people were super-interested.”

In 2018, Etherington-Judge spoke at Tales of the Cocktail, Bar Convent Berlin, Bar Convent Brooklyn, Imbibe Live, and the Moscow Bar Show. “You know it’s serious when the Russians invite you to come and talk about health and wellness,” he observes. He even made a cathartic return to the Athens Bar Show.

Having established that a need exists, this year’s challenge is to make Healthy Hospo self-sustaining. “We work with individuals, we work with brands and we also work with outlets as well,” Etherington-Judge says, noting that, in the UK, staff turnover in the hospitality industry is five times higher than in other sectors. “We’re showing businesses that health and wellness can help reduce staff turnover, can improve productivity, can improve customer feedback and return guests and make a more profitable business.”

Pauliina Marjanen, formerly global brand ambassador for Finland’s Kyrö rye spirits brands, recently joined Healthy Hospo as champion for the Nordics, and will be hosting a wellness workshop in Helsinki on 22 April. And Kristine Bocchino, beverage director at Los Angeles’ Hotel Figueroa, is going to launch the organisation in the US with a wellness workshop on 8th April 2019.

“The US needs a lot of help,” Etherington-Judge says. “We’re very lucky in Europe that we have national healthcare programmes, statutory sick leave, lots of support mechanisms. The US doesn’t have any of that. Most bartenders don’t have health insurance and there’s no statutory sick pay so if you don’t work you don’t get paid. And because it’s tip-based pay you’re extremely vulnerable if you get sick or if you have an injury.”

Bartenders (and hospitality professionals) the world over are extremely prone to mental health issues, and Etherington-Judge has thought deeply about why that is. Sleep deprivation – which means sleeping less than seven hours a night - is linked not only to mental health struggles, but to obesity, cancer, diabetes, and Alzheimer’s disease. Even when not accompanied by sleep deprivation, night-time shift work disrupts the body’s circadian rhythms. Compounding typically dreadful sleep patterns, many hospitality professionals overdo both alcohol and caffeine.

Etherington-Judge identifies toxic masculinity as a destructive industry trait. “It’s like this perverse badge of honour that you have to earn. It’s like a competition: who can do the most hours, who can get the least amount of sleep, who can drink the most and have the worst hangovers?” he says. “No one is going the other way and trying to be healthy and saying: ‘No, I don’t want to work 100 hours a week. No, I want to go home and make sure I’ve slept properly. I want to make sure I get some exercise.’ It’s almost the other way around.”

Etherington-Judge has harsh words for prima donna macho chefs, in particular. “If you look at the hospitality industry in general, it’s looking back to the Marco Pierre White, Gordon Ramsay model of churn and burn,” he says. “Just abuse the fuck out of staff until they leave, get some more in then abuse the fuck out of them too, and get some more in. People like Gordon Ramsay should be driven out of the industry because of what they’ve done to the people who work here.”

While it may take time to move hospitality away from the twin equations of anger with creativity and suffering with commitment, Healthy Hospo’s work focuses on wellness practices that can help anyone support their mental health. “We have a little mantra: sleep, eat, sweat, connect, repeat,” Etherington-Judge says. He recommends making good-quality sleep a priority, eating home-cooked food where you can, including plenty of fresh vegetables, exercising regularly, with others if you can, and getting off your phone and seeking out authentic social connections.

Of course, there is no magic bullet for mental health struggles. “There’s no single thing you can do that’s necessarily going to make you a healthy person,” Etherington-Judge notes. “But you can find your own path in your own way by trying to make good decisions in those four aspects of your life.”

As part of his work with Healthy Hospo, Etherington-Judge, who recently turned 42 (a landmark year for any Hitchhiker’s Guide to the Galaxy fan), aims to run 42 marathons in 42 days to raise £42,000 for drinks industry charity The Benevolent and support their mental health programmes. “Almost anyone in the industry can get out and run and I want to inspire the industry to get out and run for better mental health,” he says.

In between pounding the pavements, Etherington-Judge is also returning to the brand side of the drinks world. He is set to launch a Calvados in May 2019, alongside another former Diageo brand ambassador, Stephanie Jordan, under the brand name Avallen Spirits.

For a long-term fan of apple brandy (though based in Amsterdam, Etherington-Judge’s roots are in England’s apple-growing West Country), Calvados was a natural choice. Yet Avallen is also a project with a moral imperative.

“From a young age, I have been an environmental activist,” Etherington-Judge says. “I've chained myself to petrol pumps and I've always fought against climate change and for a better planet. So I wanted to do something around that but obviously staying within the drinks industry. The traditional sustainability model is about reducing harm - so we recycle our glass bottles or reduce our CO2 emissions - but we wanted to do something that goes beyond that.”

Most spirits are based on monoculture, with large land areas devoted to the production of a single crop. That tends to reduce biodiversity (the number of species in the local ecosystem), as well as relying heavily on artificial fertilisers, often made from fossil fuels, not to mention pesticides. In Normandy, cows graze around the apple trees, providing natural fertiliser, while wildflowers blossom in the grass, further encouraging insect life.

Honey bees are under threat around the world, part of a global decline in insect populations that could lead to an apocalyptic collapse of ecosystems. So Etherington-Judge will donate 50 cents (in Europe) and 50 pence (in the UK) for each bottle sold to organisations that are working to help bees.

Founding and running two separate organisations sounds like a major challenge for anyone, let alone someone emerging from a catastrophic breakdown and depressive illness, and Etherington-Judge does not claim that it is easy. He works hard to maintain good wellness practices to keep his mental health under control, but finds having his own projects positively helpful as well.

“Having purpose in life is a fundamental human need, so having Healthy Hospo and having Avallen Spirits has given me purpose, which has been extremely helpful,” he says. “Every morning I wake up now and my job is to go and help people, my job is to save the bees and save the planet, and that really helps me control my mental health.”

And if there’s one lesson to take from that low, low point in an Athens hotel room, it’s that no matter how dark the moment, it’s always possible to look towards the light.

Call the Samaritans any time on 116 123 (within the UK); talk to The Benevolent’s dedicated mental health help line from 8am to 8pm UK time on 0800 915 4610; or contact Healthy Hospo to arrange a Wellness Workshop for your team. Find someone to talk to in your country here. 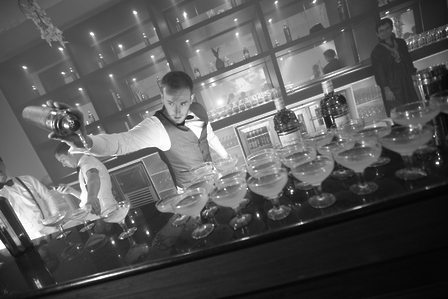