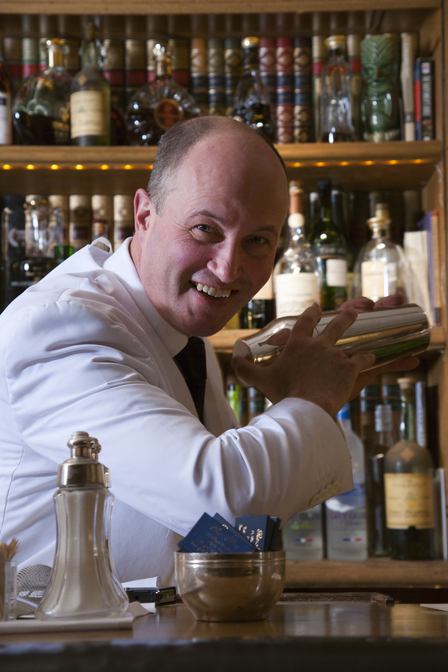 “I sent my first letter of application to the Ritz when I was 18,” Colin Field recalls. “Already by that time I'd converted my bedroom into a bar. I actually had a real bar in my bedroom, with stools and bottles behind it, although I can't remember what cocktails I was doing.”

It took Field almost 15 years to achieve his teenage dream. But he's been a fixture at Le Ritz Paris since becoming head bartender of the Hemingway Bar in 1994. And, over the long four years while the iconic hotel has been closed for refurbishment, he's kept his role, despite being deprived of his bar.

“I was one of six or seven people selected to work as a roving ambassador for the Ritz,” he explains. That's meant stints at 22 separate hotels, a cocktail crafting gig aboard Air France's A380, not to mention work with brands from Louboutin to Swarovski and food pairing dinners with Michelin two-star chefs. He also did the birthday party for his friend Kate Moss, who wrote the introduction to his second book.

Still, much as he's loved Rio, Kyoto, Hong Kong and beyond, he's clearly pleased to be back in his natural realm, which escaped largely unscathed during January's disastrous fire.

“Someone said, 'Oh Colin! There's a fire on the seventh floor,'” he recalls. “And I said, 'Well, I don't particularly care, I'm on the first,' and they said, 'Yes, but Colin! The water, the water!' and I thought, 'Oh my god!' Obviously, the firemen don't care what happens to the floors below. They just want to put the fire out.”

Still, the “new” Hemingway Bar, which opened on Monday and has been packed ever since, is reassuringly identical to the old one. “Most of my regulars had been very worried that the architects would put in a bit of their artistry, but it's the same bar,” Field says. “The photos are still there, the paintings are still there – most of the stuff that was in the bar was actually in my own home for the last four years.”

The carpets and upholstery are the same, just new. “It's the same bar counter, the same wood, albeit polished and clean,” Field says. The curtains, however, have changed, and it's not entirely clear whether Colin is happy with this innovation.

A classicist to the core, albeit with the discreet naughty streak that distinguishes all the great hotel bartenders, Field followed a very traditional path to his dream job. He decided to become a bartender after a school trip to Paris in his teens – his home town of Rugby, England (population: 70,000) had little to offer by way of bartending inspiration in the 1970s - then studied at the Ferrandi hotel school. 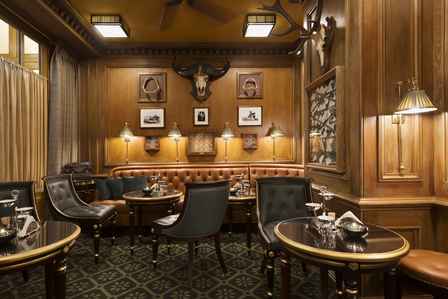 “Training in France is better than anywhere in the world,” he says. “That's not an opinion. That's a fact. Every girl and boy that works with me has done three years hotel school. That's two years general and one year specialisation.” France has had a specialised bartending diploma since 1984, although Field learned much of his art on the job.

During the 1980s, Field bounced around his adoptive home of Paris, working at iconic restaurants such as Lasserre and classic hotels like the Hotel Westminster and L'Hôtel, and developing his encyclopaedic knowledge of classic cocktails. He still sounds so English, even when speaking his extremely fluent French, that I'm amazed to learn he's actually half-German, half-South African.

Today, after over 20 years at the Ritz, he's still definite that he has the best job in the world. “The Ritz is the Ritz,” he says. “There's no other hotel in the world that has so much history. Not only in the past, but things that are happening right now. You walk into the Ritz and you feel whatever's happening is going to be your history.”

Field's role as Executive Head Bartender entails not just looking after the Hemingway Bar but running all the bars in the hotel, which enables the new-look Ritz to showcase a range of styles.

“There's a marvellous friend of mine, Fred Bayard, who's head bartender at the Vendôme Bar. He's very classic but likes working with sakes and ports,” he says. “The Ritz Bar is the mixology bar, with the doses and the pourers and the copper pots. That's run by Aurelie Pezet, the first lady head bartender of the Ritz, the youngest head bartender ever... She's an absolute marvel.”

Field himself has strong views on what a cocktail should be. “There was a time when all these bartenders were doing cocktails with about seven, eight, nine, ten, eleven ingredients,” he recalls. “When you look at the cocktails that have lasted through the years, the great ones, the ones that have lasted, have been the ones with two or three ingredients.”

While his first book, The Cocktails of the Ritz Paris (2003), was written “for the glory”, his second, Mixing Drinks, a Simple Story (2011), was a response to the trend for over-complication in bartending. “I was going through a period when I was tasting cocktails in bars and having no idea what I was tasting,” he says. “I wanted to talk about that, and how the base of the cocktail is the star of the cocktail and you work around that.”

Field sees a clear progression to excellence in bartending, a level which most will, in his view, never reach. “The first level is when you get to the level where you execute perfectly the classic cocktail,” he says. “That in itself is very rare. The second is when a bartender has a style: when you read a recipe and you can see whose it is, because they have an underlying style like certain chefs do, like Ducasse or Bernard Loiseau.”

To explain the third level of bartending, the cerebral level which he describes as art, he references the techniques of two classic French painters: Renoir, with his airy, brightly coloured brush-strokes, and Seurat, whose 'pointillist' technique created images using tiny dots of different colours.

“Renoir, when he was doing his paintings, wasn't just doing a painting of a boy or a woman, he's saying that all this colour exists because of light, and he's attacking the dark movement,” he says. “Seurat the pointillist is making the point that red is not a single colour.” Rather like a painting, a cocktail can be a response to an idea and a message about that idea as well as a thing of sensory beauty.

Field's own favourite cocktail of the many he's created is the Serendipity, “cognac, mint, champagne and fresh apple juice in a tall glass.” He's also fond of his more abstract Nautilus, and excited about some of the new drinks in the Hemingway Bar. Besides a “Clean Dirty Martini” made with three different treatments of olive, there's a pear concoction made with Grey Goose, lime juice and pear juice.

“It tastes exactly like a pear that's a little under-ripe,” he says, referencing the 20th-century French writer whose epic three-volume exploration of memory begins with a taste of a little madeleine cake. “It's almost like the madeleine of Proust. Three people can drink it at the same time, and it will take each of them through space-time to a place in their lives where they bit into a pear.”

When I ask which of the Ritz's previous illustrious bartenders have inspired him, to my surprise Franck Meier doesn't come up. That's likely because Meier, whose grave Field has visited, left the Ritz under something of a cloud, despite his heroism when the hotel was occupied during the Second World War.

“Apparently, he had a son who worked in banking in London, and he told all the customers that they didn't need to pay in the bar, they could just put the money in his account,” Field explains. “And it wasn't appreciated by the management... Apparently he went down to the South of France for a while, apparently he did prison as well.”

His own Ritz heroes are Michel Bigot, director of bars at the Ritz during the 1980s and president of the IBA, and Bertin, his predecessor at what is now the Hemingway Bar.

“[Bigot] had an enormous presence. He could talk in front of large numbers of people and project his personality and character,” Field recalls. “He was a great communicator – the most important skill a bartender can possess these days – and I felt the same energy talking to him as if I were in front of a priest.”

Bertin was 96 when Field met him, but gave him the mixing glass he used to make cocktails for Hemingway. It's currently at Field's home, awaiting a safe place in the bar.

Like a lot of Britons, especially bartenders, Field has led a thoroughly international life – in addition to French, he speaks German and “moderate” Italian, and has lived in Paris for over 30 years.

What does he think of next week's Brexit vote? He pauses, diplomatically. “As a bartender you have to stay extremely neutral in everything,” he says. “I don't want to offend anybody.” 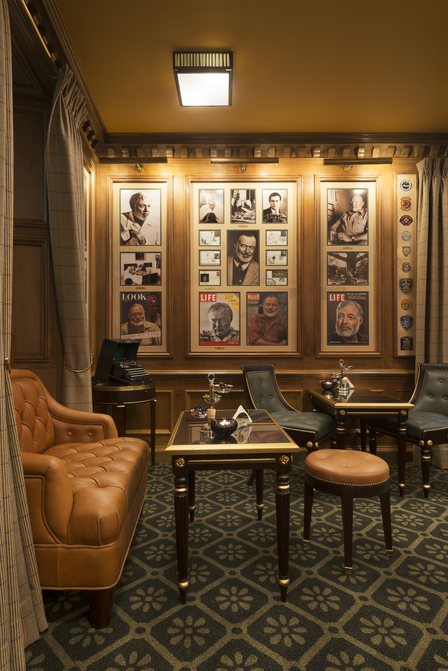