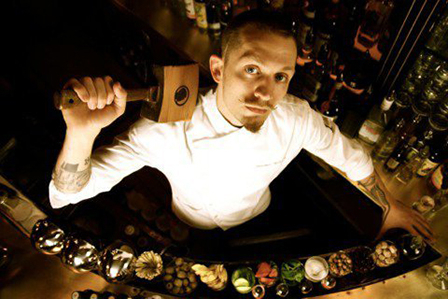 Steve Schneider vividly remembers coming out of his two-day coma, awaking in a hospital bed as a seething ball of confusion and rage. “The first thing I remember I said was, 'What the hell am I doing here? I've got a plane to catch!' and they were like, 'You're not going anywhere,'” he recalls.

A high-school athlete, he'd enlisted in the US Marines in the wake of 9/11, a tragedy that hit right on his doorstep during his final year of school. Schneider cruised through the gruelling basic training, finished number one in intelligence training, and progressed through the ranks like lightning. He could swim carrying 30 kg of gear, endure simulated gas attacks, perform a gadzillion pushups, and was all set to ship out for Afghanistan.

Then, like a lot of nineteen year olds, he made a dumb decision. And, unlike most dumb decisions nineteen year olds make, the move had lifelong consequences. A night out culminated in a ruck that left Schneider with brain injuries so severe his family were told to prepare for the worst – and ended his promising military career.

“That feeling of helplessness was the worst,” he recalls. “I was watching my friends go off and do what they wanted to do, while I was stuck in a hospital bed, doing brain rehabilitation.”

The camaraderie, teamwork and community of bartending proved a salvation both from physical pain and the ache of shattered dreams. Schneider was working alongside other injured marines, handing out towels at the gym, when he stumbled into the odd shift behind the stick at a dive bar in Georgetown, Washington.

“I was working next to someone who was 30 years old and I thought he was so old,” Schneider recalls. “But being wide-eyed and open and learning something new helped me take a step away from all my pain. Memorising prices and recipes and pour counts, these were motor skills I'd lost during my injury and I had the chance to learn them all again. It was the best form of rehab for me. At least it made me happy.”

Discharged from the army, he won the first of many bartending competitions – the criteria were speed and accuracy – and gained enough money to clear a bunch of debt. Competitive and focused, Schneider found the process of training for and winning competitions led him to take bartending seriously for the first time. He began to explore everything from molecular mixology to making his own ingredients, and to consider bartending a career, not a stopgap.

Friendship is important to Schneider. So, when he learned his best friend's mother was dying of cancer, he abandoned Washington to return to New Jersey. There he took the first job he could find, in a fine dining restaurant, which added a raft of soft and decorative skills to the ribald banter and speed bartending he'd acquired in the dive bar.

Next came the venerable Elysian Cafe in Hoboken, where he caught the attention of wine and spirits writer Anthony Giglio. Giglio would clear his path to the bright lights and cool underground of New York City proper, a longterm dream for a boy who'd grown up on the fringes of the great metropolis.

“He wanted someone to create a cocktail for his wife's fortieth birthday,” Schneider recalls. “So he hired me on the cheap.” All Schneider can remember about the drink is that it contained pomegranate, gin and Campari – but it worked. Before long, Giglio had included his drinks in the Mr Boston cocktail guide he edited, and invited him to New York to bartend alongside the sort of folk who counted, even in 2007, as startenders.

Employees Only, the New Yorkiest of New York bars and the cocktailiest of cocktail bars, had beckoned this Jersey boy since it opened, but their famously tight hiring policy and staff retention rates meant working there was more pipedream than dream. Schneider had made the pilgrimage to drink there a couple of times but kept himself to himself. Thanks to Giglio, he found himself working alongside the Employees Only crew.

“Working the bar with Employees Only, it was about the fun we were having and how much we all clicked, which made one of the guys ask, 'Why don't you come and work with us? What are you doing working in Jersey?'” Beverages had been imbibed by this point, and Schneider knew that openings at Employees Only were rare, so he didn't take the offer seriously.

Still, a couple of weeks later, he showed up “just to reminisce about the night” to be greeted with demands for his resumé (CV). On Monday, he returned for a meeting, where Igor Hadzismajlovic embraced him. “He sees 'former Marine' on my resumé and says, 'I like that, I like discipline, I'll have something for you in a couple of weeks,'” Schneider recalls.

One of global bartending's great bromances had been born. And Schneider progressed through the Employees Only hierarchy quickly, from apprentice to principal bartender and from bartender to bar manager, where he had the chance to make a real impact on financials.

Schneider had long had the dream of opening his own bar. At Employees Only NYC, he put that Marine Corps discipline to work to make it a reality. “I was making great money and I needed to build something like a future for me and whatever family I end up having,” he says. “I got myself out of debt, made more money than I'd ever thought I'd make and saved up a lot of money... For years, I lived super-frugal. I had a cheap, shitty apartment, ate cheap food, rarely went out, kept track of everything I was making and just saved, saved, saved.”

In between times, he found the time to star in Douglas Tirola's documentary Hey Bartender and appear on HBO's Got Your 6 series on military veterans. He still receives messages from people inspired to tend bar, and ex-military looking for support and inspiration, every day - and replies to every single one.

When Employees Only's five co-owners decided to expand the venture, and Hadzismajlovic opted to open in Singapore, he approached Schneider to be part-owner. Schneider backed the enterprise not just with his skills and talent but with his own hard-earned cash, upping sticks and relocating to Singapore, where his pride in being a bar owner shines strong.

“I've been behind a bar full-time for the past thirteen years, but eventually I knew I was going to stop being in the trenches and start telling other people where to dig and that time's coming soon,” he says. “I'm still behind a bar six nights a week, but I'm embracing other sides of the business, the management. I love the bar, but I'm a restaurant owner now as well and you have to know how to do all those jobs, from working the floor to working the door.”

A driven man who sleeps little – he says he naps from time to time, like a dog – Schneider, while occasionally cynical about the industry, is passionate about promoting other bartenders. His podcast, Schneideyshow.com, highlights other industry insiders.

And one of the big joys of opening in Singapore, for someone whose initial dreams were cut short so brutally, is supporting others to live their dream. “The experience here has been such a life-changing one,” he says. “To give my apprentices a platform to be what they want to be in this business is incredible. Every day I work alongside six apprentices and I care about them so much.”

1: Find somebody that you respect, that you look up to, and listen to them. Absorb the information but don't be afraid to take what you've learned and bring it to the next level and create your own style of thinking and working.

2: Bartending is mental, 100% - it's more mental than it's physical. The drinks have to be on point, but it's about relationships and about connections.

3: Discipline is huge. It's very easy to see someone with an empty water glass or something like that and just move on to the next thing but you have to have the discipline to go the extra mile for somebody and make sure they have the best night.

4: Accountability - that's big. Sometimes you've got to admit that you screwed up.