Futurist cocktails from the past 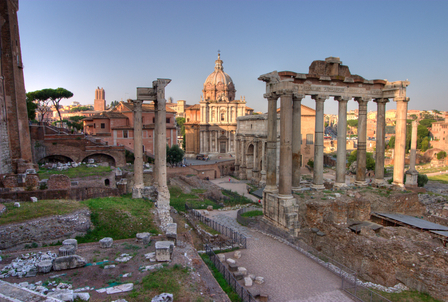 Italy has traditionally been a country of the past, tourists go there to see buildings from the Roman era, eat traditional meals and drink age-old established wines and vermouths. Cocktails which originate from Italy are mostly classics, Americanos, Negronis and the Bellini. But in the early 1900s a movement started to drag Italy into the modern day, known as futurism.

Followers of this movement wanted to tear down the Coliseum and to rid Italy of Spaghetti, to challenge notions on flavour, on art, on politics and on economics. Most of all they wanted Italy to live in the modern era.

"We want no part of it, the past," founder Filippo Tommaso Marinetti famously wrote.

As well as their many views on society the futurists believed a man is both what he eats, and crucially what he drinks.

In the last decade futurism has once again been under the spot light, principally by expert Fulvio Piccinino. At first he started creating the futurist drinks for special events, then for bars and now he is spreading the word online.

As with everything, the cocktails, or polibibites in Italian, of the futurists were about change and they broke with tradition by trying unusual pairings of flavour and odd balances of spirits and liqueurs.

"The polibibites were meant to provoke the people, like the poetry, films, paintings and architecture of the futurists," says Fulvio.

Instead of seeking a balance between sour and sweet they played with hot spices and salt. Rather than garnish with a traditionally lemon or orange twist the cocktails were decorated with chocolate and cheese stuck together, holy bread and anchovy, sweet dates stuffed with cheese and parma ham with sliced bananas.

Whilst only Italian products like wine, grappa, Campari, strega and self made infusions were used, they were paired with almond paste or pineapple.

And it wasn't only about taste. Often drinkers were subjected to green lighting, music by Vágner or the rumble from engines. Going even further into this sensory exploration people would touch different textures such as sandpaper, velvet or silk and then drink again, noting how sensations experienced with their hands could change the way a drink tasted or made them feel.

"Not one of futurists that did polibibites was a barman," says Fulvio. Instead they were creative individuals from other walks of life, happy to experiment.

Most crucially however recipes were not reordered in terms of measurements. Instead it was left purely to chance and for each mistake another cocktail could be invented, perhaps even better than the last.

How does it impact today?

"Italian barmen always look to American cocktail culture to try and discover new concepts," Fulvio says. "Even though barmen, in a way, use futurist techniques everyday by making herb infusions, using scents or perfumes with drinks or using frozen fruit juice which Marinetti helped to invent."

Even in its home country of Italy the futurist movement and the inventiveness of the cocktails is not well known.

While the food from the period eventually influenced the French nouvelle cuisine the bar culture never carried into other movements. World War One ended Marinetti's push into the future and it was subsequently never revived.

... comment(s) for Futurist cocktails from the past