Words by Rupert Prior 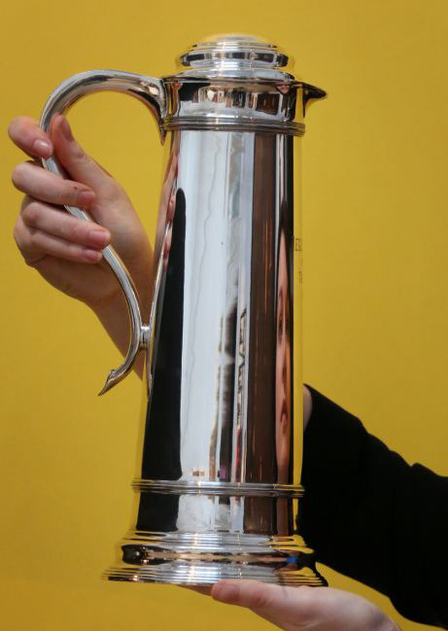 The cocktail shaker is a uniquely American invention says Rupert Prior.

The true origins of the cocktail shaker are much debated but as early as 1859 'Professor' Jerry Thomas, star turn as bartender at New York's celebrated Metropolitan Hotel, was touring Europe demonstrating his spectacular flaming Blue Blazer cocktail, using a set of sterling silver cups (then common mixing practice). Cups, or tumblers, were succeeded by the standard two-piece cocktail shaker: two containers that fit one into the other, mix the ingredients and chill the contents in quick time.

In 1872, William Harnett applied to the United States Patent Office for a design patent for improvement in 'Apparatus for Mixing Drinks'. The three-piece cocktail shaker, affixed with built-in strainer and air-venting for ease of pouring, followed in 1884. Both two- and three-piece configurations, with remarkably little change in variation, remain popular today.

'Mixed drinks' have been around for generations. In 1892, G.F. Heublin was the first to offer pre-mixed liquors, the Connecticut company offered imbibers a choice of bottled Martini, Manhattan, Tom or Holland gin, Vermouth (considered by some to be "dangerously Parisian") and whiskey. By 1900, Heublin was slanting advertising towards women: "Before you do another thing James, bring me a CLUB cocktail. I'm so tired shopping, make it a Martini. I need a little tonic and it's so much better than a drug of any kind." Those were indeed the days.

As the vogue for mixing drinks spread during the Victorian era the cocktail shaker progressively attained the rank of bar-room fixture. Early examples recalled the gentility of 19th century English tea or coffee pots (forerunners of the 'Novelty' shaker to which we shall return). Song-writer Irving Berlin claimed that "you cannot make your shimmy shake on tea", and grand American hotels, observing the English custom of serving Afternoon Tea, capitalized on the convention by launching the cocktail 'Hour.'

Harrods listed silver-plated shakers in their 1908 catalogue and Dunhill, Cartier, Tiffany and Asprey, among others, commissioned limited edition models of infinite variety and interest. Merry making on a lavish scale saw the pastime of cocktail drinking, enlivened by the rapid growth of the night club scene and shared by women and men of the bright young set on equal terms, add to the shimmering portrait of the Jazz Age.

Yet in 1920 America ran dry when a ban on the manufacture, sale and transportation of intoxicating liquors was enforced under the Eighteenth Amendment. The Prohibition era drove America to drink: the age of the 'Speakeasy' and bootleggers (not to be accounted among the angels) had, in fact, dawned, greatly increasing the consumption of illicit liquor and making a mockery of the law. 'Public Enemy Number One', Alphonsus ('Al') Capone, achieved world-wide notoriety as a racketeer in Chicago during Prohibition. 'The Big Fellow', sentenced to ten years for violating the Eighteenth Amendment, received the gift of a cocktail shaker from 'The Outfit', famously inscribed TO A "REGULAR GUY" FROM THE BOYS 1932. The sterling silver shaker, of impeccable provenance, went under the hammer at Sotheby's last month, selling for £50,000, (estimate £1,000). Great Gatsby author Scott Fitzgerald's handwritten recipe for bathtub gin survives.

The first design patent for a shaker incorporating a 'juicer' was issued in New York in 1924 to Louis W. Rice, and sold as a 'beverage' shaker (Prohibition was not repealed until 1933). In 1926, the International Silver Company, established in 1898 and the world's largest silverware manufacturer, made a spirited contribution to shaker history by launching George Berry's 'Golf' design, generally assumed to be the first figural shaker and prefiguring the 'Novelty' shaker genre. The eight-piece sporting set featured a mixer rendered as a golf bag with simulated cow hide grain, leather straps, stitching and ball bag, presented on a tray with six gold-lined cups. The original was later offered with a spout affixed and rare remaining examples are highly sought after.

On the theme of rarity, only a handful of 'Lighthouse' shakers were catalogued for the 1929 gifting season by the New England consortium. A replica of Boston's Lighthouse, the silver-plated mixer was listed in two sizes, the larger with space for a concealed music box to the base. A congenial host could raise the shaker to reveal such becoming songs as How Dry I Am or Show Me the Way to Go Home.

As the 1920s roared on, French influence on contemporary design was perceptible at the 1925 Exposition Internationale des Arts Decoratifs et Industriels Modernes in Paris. The so-called Art Deco movement proved a showcase for far-reaching design elements in the Machine Age, and the sharp edge of creativity enhanced the appeal of innovative shaker design for an increasingly style-conscious audience.

The 1930s must be accounted the gilded age of the cocktail shaker, when leading-edge industrial designers had a ball producing 'Thirst Extinguishers' that have since merited classic status. Luxury makers found inspiration for novel designs in the modern spirit among hand-bells, milk churns and ship's lanterns (Asprey), monoplanes and Zeppelin airships (J.A.Henckels). The sky was the limit for Lurelle Guild's series of stylish skyscraper cocktail sets, and the streamlined skyscraper Cocktail Ensemble by Norman Bel Geddes (Revere). Notably, the most beloved of novelty designs from the best of all periods was E.A.Schuelke's genial 'Penguin' shaker of 1936 (Napier), one to thrill the hearts of collectors. In 1940, a touch of glass was represented by a glass shaker from Hawkes in company with Heisey's glass mixer, selected as the finest in affordable American modern design for display at Manhattan's Museum of Modern Art.

Cocktails keep life from getting boring and honour an important rule: The Frivolity Rule. Marvellous to relate, by no means has the last been heard of the cocktail shaker. Post-war, the worldwide pattern of total alcohol consumption increased per capita, suggesting an explanation for the brief renewal of interest in the conventional cocktail shaker.

Yet, as the cocktail craze started up again, the shaker met a new challenge in the shape of 'redi-mix' drinks and the 'Labour-saving' electric blender. At the flick of a switch, a regular blender could mix most drinks calling for rattling of ice cubes. Battery-powered swizzle sticks eclipsed the skills and showmanship of mixing by hand.

In 1978, a famous New York columnist expressed fears for the extinction of the martini, but it must be regarded as a matter for satisfaction that both the martini, and its long-term running mate, the cocktail shaker, have survived to experience the revival of cocktail bar culture. In an unspoken way, no one with the history of what has gone before in mind could fail to see the promise of a new era for the cocktail shaker.

Long may it continue.