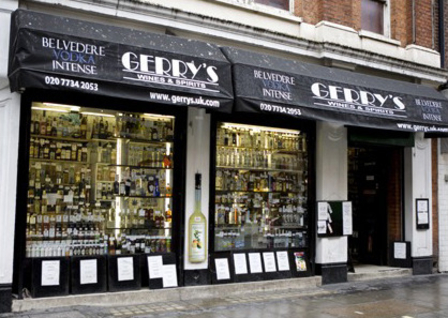 Sifting through the inexorable stream of wines, spirits, liqueurs and myriad other obscure tipples that seem to turn up at Gerrys in the hope of finding a permanent place on the shelf is rather a complex matter.

The shops number one priority is clearly its customers; without them there wouldn't be a Gerrys and so it's vital that we are able to offer an array of fantastic products.

When one eventually turns up that really stands out to us which we believe our patrons will like it makes it over the first hurdle so to speak.

Gerrys will buy direct from the distillers of outstanding small batch products like Sacred in Highgate and Warner Edwards in Harrington as well as helping out young yet fearless brand agencies like Back Bar Brands.

The shop has a fantastic working relationship with all of the larger Wine and Spirits merchants and solid distribution companies such as Mangrove, Spirit Cartel, Luscious Liquids, Love Drinks and High Spirits whose representatives are like family to the store as are all of the independent sellers of the weird and wonderful who founder Michael Kyprianou and manager Alan Daly have established an airtight friendship with over the many years the shop has been operating.

Everything has it's place on Gerrys shelves; from the scorching 250,000 scoville Naga Chilli Vodka to the dangerously moreish Caramel Rum; adored by the sweet toothed lovers that got boozy on it during their honeymoon in The Canaries.

We need to keep our entire client base happy so it's important that our shelves aren't merely filled with bottles; for you see, and at the risk of sounding a bit cliché, they are more than that; every iridescent vessel tells a story.

Granddads navy rum is always a winner at Christmas and Nans favourite madeira is bound to bring a smile once unwrapped. A bottle of wine in front of the telly might lead on to allsorts of hanky panky and that bottle of Tequila at the office party likewise. It's the Dutch courage before the first date and the toast at the eventual wedding. It's right there next to us from when we celebrate the arrival of our newborns to when we send off the loved ones we eventually lose. It buries hatchets, alleviates the pain of broken hearts and can even, at a push, make us appreciate our dads dance moves no matter how embarrassing they might be.

To pick out a handful is a formidable task as we love them all in their own special way but we've tried to assemble a list of our own magnificent seven. Everyone's a critic and why bloody not as the world of drinks would be a very plain place if that weren't the case. This is ours and we hope you like it but if you get all uptight about it and feel differently then just come down to Gerrys where you can sift through our selection and set out to create your own...

Ratafia is made by Setta Vie in the Abruzzo region of central Italy amidst the heart of protected nature reserves between the mountains and the coast. It's a liqueur made from a mixture of wines derived from both Montepulciano and Sangiovese grapes.

These wines are blended with a molasses based alcohol that has been infused with fresh nutmeg, cherry kernels, berries, almonds and a few other local goodies to produce a sweet spicy liqueur that is yum over ice after a big dinner and can be fantastic if used carefully as an addition to different spirits and wines in a well made cocktail.

Its ABV is reasonably low at 20% but don't let this put you off. It tastes like a big fat bakewell tart at first and then moves on to a scrummy wine and plum finish. It's got it going on and why it's not on far more back bars is a mystery to us. Thus far it remains reasonably unknown to most until discovered more commonly by travellers in it's native home or behind the bar in small family run Italian restaurants in the U.K.

We've had so many good nights on this stuff that it has to go on the list. Most of you will probably already know it and if you don't then please immediately question why! It's made by the Camarena family at La Altena distillery in Arandas where after distillation it is rested in steel tanks for about a month before bottling.

It's an affordable, super clean and flavoursome tequila that truly represents the more old school style of how the spirit should taste. It's peppery and buttery and you really get those big fat agaves coming through on the taste buds; it's complex with a nice long finish for a Blanco and this is probably why it's loved by bartenders and aficionados alike.

Brandy and Benedictine sit together like two peas in and a pod and after years of people doing it manually to soften the sweetness of the original liqueur, the boys from Palais Benedictine in Normandy started doing it themselves and sometime in the late 1930s this superb creation became available. As the name clearly states it's basically a blend of French Brandy and Dom Benedictine that is then rested in French oak until the powers that be deem it ready.

The complex liqueur itself has twenty seven different herbs and spices inside and is completely stand out on it's own but the brandy seems to give it a dryness that makes it pop out and tickle your taste buds. The history of it all is actually really interesting and taste wise it reminds us of Nans booze fuelled Christmas cake and thus we simply can't get enough of the stuff.

This is definitely a curious number. It's a bright red Italian liqueur (famously from Florence) that is most well known for being an essential ingredient of the Italian trifle/cake Zuppa Inglese. It's ABV ranges from around twenty to thirty percent depending on the particular brand and it can be quite tricky to get hold of. The interesting thing about it is that its striking colour comes from a red dye originally derived from the Kermes Vermilio beetle. It's now made from Cochineal another type of creepy crawly that is eventually made into the same sort of dye.

Insects aside when it's not bunged into a trifle it's a nice little tipple when served over crushed ice. It's a sweety by nature and is made from the maceration of cloves, orange and star anise, cinnamon, cardamom, nutmeg, vanilla, and various other secret herbs and spices in a neutral alcohol. It's heavily driven by the aforementioned spices but comes through with rosewater and orange notes as well. Trifle optional!

This red wine is made from a blend of Mourvere, Grenache, Cabernet Sauvignon, Carignan and Cinsault Grapes. It comes from Ghazir, which is just north of Beirut in Lebanon. Whilst the country itself is often in the spotlight, this a prime example of peoples ability to create greatness in the most testing of climates and times. It's both dry and fruity and is between medium and full-bodied. Amongst wine heads it's a kind of cult classic and can live well for a good twenty-five years or so. The individual wines are aged for a reasonably short time of around three years before being blended together and set to age in oak for a further four.

The grapes used are all handpicked and the yeast used comes naturally from the grapes themselves and the environment within the winery, so taking into account there's no fining or filtration involved you might consider it to be quite a purist affair. The wine is awesome and that's the main thing but it's also fantastic to see that Lebanon has rightly assured it's place amongst the big boys.

Manos Smyrlakis started up the Finest Roots range in early 2013 with the vision of merging tradition and innovation to create a line of new Greek liqueurs and spirits and to be fair he nailed it. Only time will tell if it takes off well in the U.K market but we all really hope that it does. Mastiha has an ABV of 28% and as most of you will probably know is a traditional Greek spirit made from the gum of the Mastic tree; the gum used here comes from the traditional trees on Chios Island.

The French bottles that are all screen printed in Athens are instantly recognisable and the taste is quite unique bearing an undercurrent of Anise with a curiously sweet then sour liquorice taste. Traditionally used as a Digestif there's definitely room to make some great cocktails with this stuff. The rest of the range is also well worth a go particularly the lively clove, cinnamon and Honey driven number called Rakemelo. Greek products, bars and bartending are often overlooked. This is a big shame as this amazing country has a wealth of fantastic offerings on all fronts.

A top-notch orange liqueur from the motherland of Gerrys founder Michael Kyprianou. It takes about twenty of the two different types of hand peeled oranges to make a single bottle of the original liqueur and around about the same amount of fruit for the other three flavours that are made including Mandarin, lemon and Bergamot.

This orange and herb liqueur is made in the small mountainside village of Mongari in the southern Commandaria region of the Island. "Secret" mountain herbs are left to macerate with the orange peels and the production takes around about six months to finish. It's certainly not a shy one at 35% ABV and this does come through in tasting but all in all it's a big juicy mouthful of orange goodness with a firm kick and some great herbaceous yet not overbearing notes on the finish. Amazing after dinner or as a cold shot.

There are plenty of options for this in many different styles of drinks and it's another little stunner that you should certainly give a road test. Try it once and we reckon you've found a friend for life. EES EEGIA! 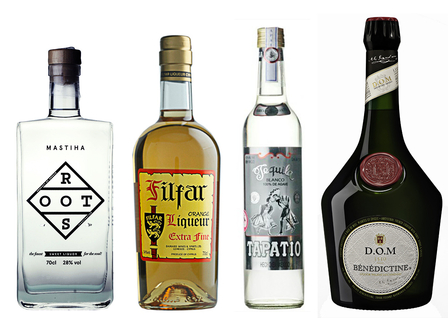