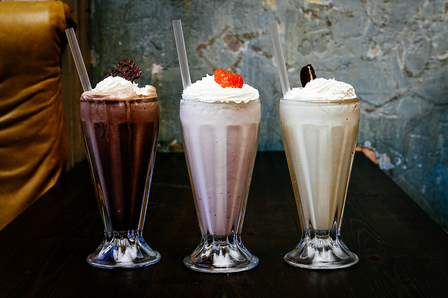 The hard shake normally refers to a vigorous technique for shaking cocktails, however, here we're speaking of boozy milkshakes.

And in case you missed the invasion, London is now occupied by American diners, popping up across the city with their offers of deliciously (and somewhat naughty) full-fat food and equally full-fat drinks. And what is ice cream and milk blended together without a healthy dose of spirit and liqueur goodness?

Served alongside mouth-watering burgers, sweet potato fries and mountains of coleslaw it would seem one indulgence too far. But, apart from being oh-so-filling, made correctly, they are impossibly moreish and tasty.

So what makes a hard shake so appealing? For starters it's a cocktail with a texture like no other. Research into our global addiction to ice cream revealed that we are particularly conditioned to like food and drink which changes texture in our mouths. Chunks of ice cream that make it up the straw creates interest in our brains as they change, melting from solid to liquid.

Then there's that overall creamy nature of the drink which is matched by no other cocktail. Egg white may add a silkiness to the Clover Club but, as stated in Food Texture and Viscosity, Concept and Measurement by Malcolm Bourne, the three most relished texture notes are crispy, creamy and chewy. Not many cocktails fill any of those requirements, but some hard shakes with their toffee and fudge can tick more than one box.

Over at The Diner group, Chris Todd, the Chief Operating officer, says the secret to a great hard shake is the quality of the ingredients. "You can get powders, mixers and creams but nothing even compares to really great ice cream and milk. It's simple and doesn't need to be messed around with."

In their experiments for building the menu Chris and his team were quick to discover some things don't go with milk. "Agave spirits don't work too, just as anything bitter or citrus-led and then somethings separate the mix. You have to be careful but don't need to be a molecur scientist to figure it out."

Drawing on the classics such as a White Russian the menu includes shakes with Bailey's, Kahlua and Amaretto. As well as creamy liqueurs aged spirits with vanilla notes from the wood work well such as rum and bourbon.

At the Blues Kitchen, in their Camden site as well as the newly launched Shoreditch venue, three classic-style hard shakes are on offer.

The Strawberry Soul is a blend of Baileys, strawberry ice cream, cream and marshmallows, their The Caramel Captain is a moreish mix of Captain Morgan's dark rum, salted caramel ice cream, fudge pieces and cream while The Chock N'Roll is a boozy hit of Four Roses Bourbon, vanilla ice cream, chocolate pieces, maple syrup and cream.