Often described as a sweet or 'cordial' style of gin, 'old tom' gins were overwhelmingly popular in the 18th and early 19th centuries, when gin was more pungent due to the limited rectification (purification) of the base spirit possible in the copper pot stills at that time.

The rough tasting congeners no doubt present in the gin were masked by flavouring (most commonly with lemon or aniseed) and/or sweetening with liquorice, and later, in the 19th century, with sugar. This sweetened style of gin has since become known as 'old tom'.

Old Tom probably started as a general term but it became associated with a particular style of gin. One story has it that a cat fell into a vat of gin at an unnamed distillery, giving the gin a distinctive flavour. However, the creation of this style of gin more likely lies with Thomas Chamberlain, an early gin compounder.

We have found numerous references to one Thomas Norris, a former apprentice to Thomas Chamberlain at Hodges' distillery in Church Street, Lambeth. It would appear that he left employment at the distillery to open a gin palace in Great Russell Street, Covent Garden where he sold gin from casks purchased from his former employers as 'Old Tom'. This was apparently concocted by Thomas Chamberlain and Norris named it Old Tom by way of a compliment to his old boss. 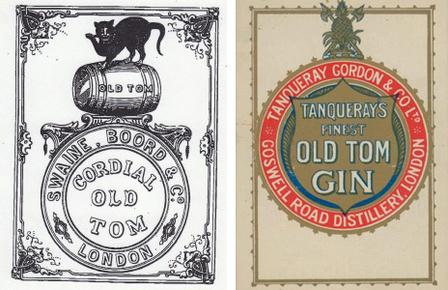 The most compelling evidence linking the term 'old tom' with Thomas Chamberlain and Boord's of London revolves around the company being the first to market an old tom gin with a label illustrated with a tomcat sat on a barrel and this went on to become by far the best known brand of this slightly sweet/highly flavoured style of gin.

In 1903, Boord & Son went to court against Huddart & Company to defend their 'Cat Brand' trademark under England's 'passing-off laws'. They presented evidence to Mr Justice Swinfen Eady that they had introduced the term in 1849 and that the brand was named after "old Thomas Chamberlain of Hodge's distillery" and presented an old bottle label with a picture of "Old Tom" the man on it, and another label with a picture of a young sailor aboard a ship named "Young Tom."

Another much muted origin for the term Old Tom lies with a character called Captain Dudley Bradstreet. He researched the intricacies of the 5th 1738 Gin Act and took advantage of a loophole that said an informer must know the name of the person renting a property from which gin was illegally being sold for the justices to have the authority to break into the premises in order to arrest the transgressors of the act.

According to Dudley's autobiography, he had an acquaintance rent a house in the City of London on Blue Anchor Alley and nailed a sign of a cat in the window, under it's paw he concealed a lead pipe. He let it be known that gin would be available from a cat in the alley on the following day and moved in with supplies of food and gin purchased from Mr. Langdale's distillery in Holborn before barricading himself into the house.

His patrons pushed coins though a slot in the cat's mouth and Bradstreet in return poured gin down the pipe which trickled out from under the cat's paw. Customers held a cup or simply their mouth under the paw to receive their gin. The authorities found themselves powerless to act and Bradstreet apparently profited from his scheme for three months before so many copied him that competition caused him to move on.

Years later, in 1755, Bradstreet wrote about his exploits in an autobiographical work entitled 'The Life and Uncommon Adventures of Captain Dudley Bradstreet'. In this (page 78) he described how he had overcome the Gin Act, as I've recounted above. 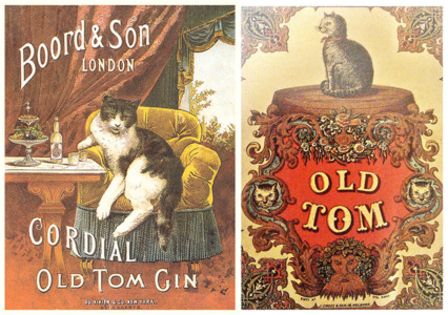 There is no evidence linking Bradstreet to the term 'old tom' and the likelihood is that Bradstreet's cat and the term 'old tom' are coincidental and that 'old tom' originated in the 1830s in deference to the distiller Thomas Chamberlain. However, it appears Bradstreet did start the trend for what became known as Puss and Mew houses. Vendors would sit concealed within a premise and customers wanting to buy gin would say 'puss'. The vendor would respond with 'mew' and push out a drawer into which the customer would deposit payment. The vendor would recover the coins from the drawer and push it forward filled with a measure of gin. These human vending machines were found all over London and for a short period the subterfuge succeeded in stifling attempts to enforce the 1738 Gin Act.

In the 1830s it was common for gin distillers to finance the opening of gin palaces as tied houses for the sale of their gin and it seems likely that Thomas Norris was a loyal and trusted employee who the company backed to open his gin palace. Norris would have bought many several styles of gin from Boord's including lemon, unsweetened and sweetened. It is not implausible that he named a style perfected by 'old' Thomas, his former boss, 'Old Tom's Gin'. The evidence supporting this origin is far more compelling than the claims of Captain Dudley Bradstreet, a self-publicist to the extent that he named a book after himself. (And what kind of person does that?) 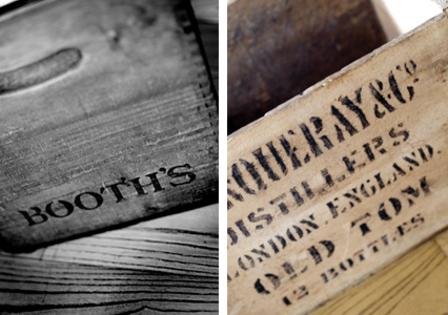 In the second half of the 19th century unsweetened or 'dry' gin grew in popularity, partly led by the growing fashion for dry champagne in England at the time. By this time the quality of the base spirit had improved thanks to the invention of the Coffey still and these dry gins were close in style to what we know as 'London dry gins' today.

During the 20th century what little old tom gin brands that did survive typically contained 2 - 6% sugar and were made in England for export to Finland, Japan and parts of the USA. As sales dwindled due to lack of demand these also gradually ceased.

It is my belief, supported by sight of distiller's note books from the period with recipes headed Old Tom, that what we now call Old Tom referred to a wide range of pre-London dry gins. In the early days these used sweet and flavoursome botanicals to mask poor distillation but as distilling methods improved and sugar became a cheaper commodity, a cleaner, sugar sweetened style of Old Tom emerged.