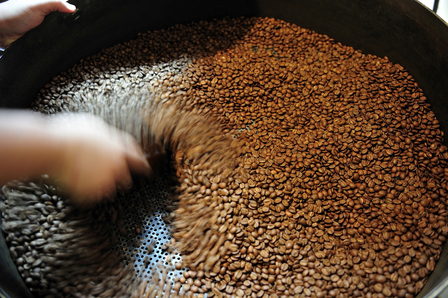 The recent fascination with coffee, the waves of new coffee shops and the seemingly unstoppable emergence of artisan roasters specialising in single estate beans and carefully balanced blends has ushered in a renaissance in the art of filtering coffee.

The beauty of this somewhat gentler method of preparing coffee is that by taking care and paying attention to detail it's possible to produce a coffee at home that's as good as any made by your favourite barista without the hours of commitment and financial investment it takes to gain control of an espresso machine. And who wouldn't want to start the day with a cup of brightly flavoured freshly prepared coffee. Not forgetting too, that with its 800 to 1000 aromas, coffee makes a great cocktail mixer.

Unlike tea, coffee floats, so ways of exposing the coffee to water, and then filtering have been an essential part of its preparation since it was first drunk. The last few years has seen the introduction of new brewing devices, along with the revival of old kit, but all methods of making coffee are based on one of just two approaches: full immersion or pour over - or as Tristan Stephenson in his fabulous book The Curious Barista's Guide to Coffee eloquently puts it "it's kind of like the difference between having a bath and having a shower. One routine gives a thorough soak, while the other is more of a complete rinse".
Each of the two methods draws out a slightly different flavour profile from the bean so when choosing a method bear in mind your preferred cup taste or the profile you are after in your mixer. Do you want to retain the heavier oils or are you after a lighter brighter cup, for example. Many good coffee bars now sell filtering equipment so do have a pre-purchase chat with the barista.
Both methods facilitate minor adjustments to tweek flavour: grind size, filter type, water temperature, pouring technique and brew time will all contribute to tailoring the final taste. Before picking a method its worth looking at each of these different elements in more depth. Once you understand them you will be better equipped to choose the system that suits you best.

Filtering can be a much gentler preparation process than pulling an espresso, making it a great way to showcase the complex more delicate flavours of the bean, particularly those found in lightly roasted single origin Arabicas. As the resultant flavours are gentler, you won't need milk to calm the coffee down so you'll really be able notice its brightness and better appreciate its subtleties.
For A J Kinnell of Monmouth coffee, "the advantage [of filter coffee] is that it's the least disruptive brewing method: what you have is a lot of clarity in the cup...you can taste the nuances of the flavours so clearly." Jeremy Torz, co-founder of Union Hand-Roasted says "filter coffee offers a longer, purer expression of the coffee. It can be delicate, aromatic and smooth, as well as intense". 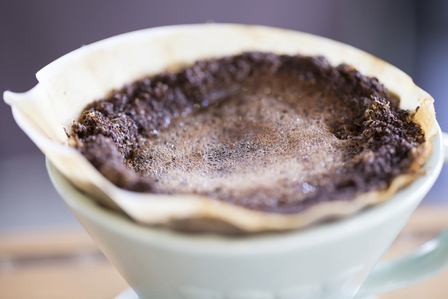 Coffee filters probably came into general use towards the end of the 17th century when coffee became widely available in Europe. Early filters were made of fabric, which was suspended into or attached to the mouth of the pot. Cloth filters allow the passing of a greater concentrate of flavourful coffee oils than paper but over time they can become clogged with fine grounds, slowing the movement of the water, eventually leading to over-extraction. If you are using fabric filters they should be scrupulously washed, even boiled and thoroughly dried to prevent rancid flavours.
The reusable woven metal mesh filter was first exhibited at the 1900 World Exhibition in Paris. Reusable metal and nylon filters are in use today but as their aperture size is relatively large, grinds need to be coarser. The risk here is that as there is less resistance to the movement of water, brewing time is shorter, possibly resulting in under-extraction.

Though they are known to have been around in the 17th century, the paper filter was not perfected and patented until 1908. Responding to the fact that coffee percolators often over brewed coffee, espresso machines left grounds, and linen filters were boring to clean, enterprising German housewife Melitta Bentz perforated a brass pot with nails and used a flat disc of blotting paper to make her coffee. In 1909 she took a perfected version to the Leipzig fair and sold a wopping 1,200 units. The conical filter was introduced in the 1930s.
Paper filters allow for a finer ground than cloth and by trapping some of the coffee's oils and essences, they produce a clearer lighter bodied coffee, often described as having a sweet, light, citrussy flavour. Paper filters should always be rinsed before use to prevent the smell and taste of the paper ending up in the brew. Rinsing will also act as a primer so that when the water is poured it will move straight through the filter rather than lingering as it first saturates the paper.

It goes without saying that as most of a cup of coffee is water it's very important to give the water you use some due attention. To avoid chlorine tastes use bottled or filtered tap water. Some mineral content is essential as calcium and magnesium help draw out flavours from the bean, but very hard water (ie water with a lot of dissolved solids) is not a good solvent. If you can, use a water with just 80-150mg of dry residue per litre. Water should be heated to between 90°C and 95°C - any hotter and it will burn the coffee. Different coffees will reveal their best potential at different temperatures with lighter roasted coffees generally preferring a higher temperature. Once you've set up your brewing system rinse it through with hot water to warm all the elements.

Buy whole beans and use them within thirty days of the roasting date - if they're older throw them away. Store them in an airtight container at room temperature and grind just before you make your coffee "If it was ground an hour ago, you might as well not bother," says Andrew Tolley co-founder of Taylor St Baristas. The dosage of coffee you use, and ratio to water, is something you can play with but a good starting point is 1g of coffee to 15ml of water. 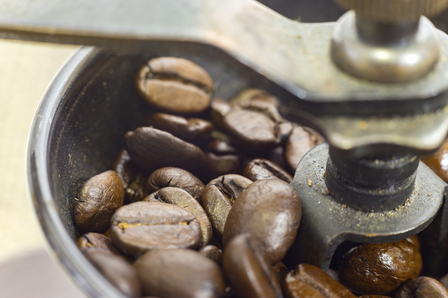 Use a good quality burr coffee grinder (not a blade grinder), preferably made of titanium coated steel. Grind to a size suited to method. On average, grounds should look fine but still feeling gritty between the fingers. Make sure the grind is uniform to ensure even extraction - you don't want bitter over extracted tones mixed with dull under extracted ones. The coarser the grind, the longer the brewing time will be. Keep your grinder clean as it will develop a build-up of oil.

Before you start the filtration process, blooming (pre-wetting), your coffee will enhance flavour by improving the penetration of the water into the grounds to facilitate a more even extraction. Without blooming, access to the flavour solubles within the grounds would be impeded by the layer of carbon dioxide that forms as soon as the water hits the coffee. You will see this carbonation as a layer of bubbles and if the coffee is very fresh the volume of the bed can double in size within 10 seconds. When you are ready to make your coffee, pour about 30ml of the heated water evenly onto the coffee grounds with enough energy to agitate them. After about 45 seconds, when the bloom has subsided, you can add the rest of the brewing water. 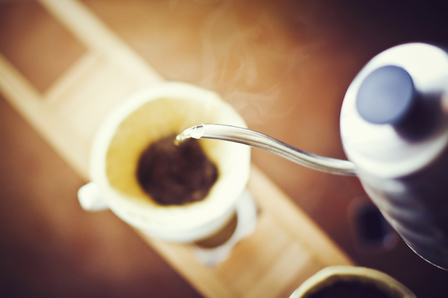 Pouring technique (also known as filling) is important as it will have an impact on the extraction of flavour through brew time, turbulence and temperature. A specially designed pouring kettle, with its long thin swan neck spout, will give a slow consistent controllable flow of water in a pleasing straight line. Pouring kettles can be purchased as stovetop or electric, some with temperature control.
Pour at a rate that gets the water moving through the coffee so as not to produce bitter over extracted tones but don't add so much weight of water that it forces the brewed coffee through the filter too fast. The other danger of pouring too slowly is that you won't achieve a high enough temperature to best extract the sweetness from the bean. It should take about one-minute-and-45 seconds to pour 250ml of water.
Pour a fine constant stream in tight concentric circles without hitting the edges of the coffee where it will just run straight down the side of the filter. Aim to soak all the grounds evenly and agitate them enough to improve the flow around the grounds. Once all the water has been added allow the drip, which should take about two-and-a-half minutes.