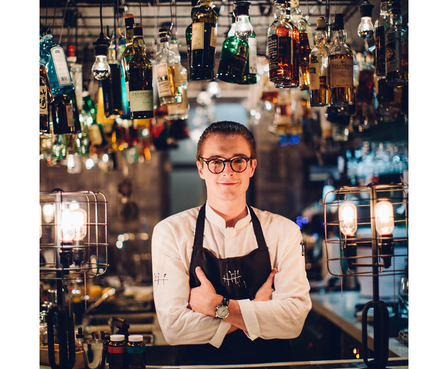 “When you get recognition from your peers it is incredibly humbling,” says Joe Schofield, the award-winning bartender rising to the top.

Since his start in hospitality many moons ago, Schofield’s career has gone from strength to strength, walking away with International Bartender of the Year at Tales of the Cocktails Spirited Awards and Bartender’s Bartender at the World’s 50 Best Bars in 2018.

Despite his awards and formidable résumé, Schofield is as humble as they come. A bartender who values diversity in the drinks industry, he visited South Africa earlier this year fundraising for Beyond Bars Akademia, an educational programme which supports female ex-offenders through hospitality training.

His career has taken him as far afield as Cape Town and the Amazon. “I’ve been travelling the world. I never thought this industry could take me to those places,” Schofield says.

Born and raised on the outskirts of Manchester, Schofield fell into the cocktail scene when he landed a job at Leeds institution Jake’s Bar while studying contemporary art at university. Naturally, his career plan shifted to bartending after he discovered a passion for mixing cocktails, and the move to Tiki-haven The Liars Club came next.

Yet, for an ambitious bartender like Schofield, he saw an opportunity overseas. In 2012, he took the leap to Australia. He tended bar at Palmer & Co, a speakeasy in Sydney, and the Rockpool restaurant group in Melbourne before his wanderlust instinct began to itch.

Schofield returned to the UK and joined two London cocktail icons, the American Bar and the Beaufort Bar at The Savoy Hotel in 2014. He perfected his craft while working under seasoned bartenders Erik Lorincz and Chris Moore.

In 2016, Schofield took the leap to Singapore and joined the team at Tippling Club as head bartender. It was here he worked beside owner and chef Ryan Clift on a pioneering drinks menu. “We’re almost like-minded creatures,” he says. “Ryan’s knowledge of the drinks knowledge can be rivalled to that of a bartender. He knows his cocktail history, he knows about spirit production, he knows a lot about wine, almost comparable to a sommelier.”

Following 10 months of research and planning, the duo launched their award-winning cocktail programme, the Sensorium Menu. Their menu explored the multisensory and triggered memories through aroma. From grass and rain to caramel and campfire, guests could explore the entire menu through 12 scent strips.

Their second cocktail menu in the drinks programme, Dreams & Desires, explored taste. They consider it to be “one of the world’s first completely edible menus”. It consisted of 12 homemade gummy bears flavoured with the principal taste of its corresponding cocktail. A fun and engaging concept, Beauty, Revenge and Happiness were among the line-up. Meanwhile, the bar turned out half a million gummy bears during the menu’s stint.

"It was all about innovation, pushing the boundaries and senses,” Schofield explains. “It’s a bit tongue and cheek, a nod to our heritage. We used to play Spice Girls and Madonna in the dining room. It’s all about creating that fun environment.”

During Schofield’s lead at Tippling Club, the bar ranked 31st in the Worlds 50 Best Bars in 2017 and ranked 7th place in Asia’s 50 Best Bars in 2018. “I’m very fortunate my wife is extremely supportive,” he laughs. “I dedicated everything to my career.”

A driven and determined bartender, Schofield left his position in 2018 and returned to his roots in the UK. “Ryan and I had an incredibly special relationship,” he says. “Ryan’s been incredibly supportive of my move to Manchester and the projects I’m working on here, but we didn’t want to end the relationship.”

Schofield and Clift launched a consultancy company which takes its name from their acclaimed menu, Sensorium, and covers all aspects of the food and beverage industry. “We wanted to keep exploring that relationship between bartender and chef,” he explains. With plans underway, from restaurant and bar consultancy through to menu concepts and everything in between, the pair aim to pursue innovative avenues.

Besides co-founding a consultancy company, Schofield is exploring his entrepreneurial talents in a new project with his brother, Daniel Schofield, a fully-fledged bartender of his own accord. Their family-run bar, Schofield’s, is set to open in the very near future.

But Schofield doesn’t give anything away with his bar under wraps for the time being. In the meantime, the bartending duo are travelling and taking Schofield’s around the world. They’ve completed 60 events in just nine months, including guest shifts, masterclasses, seminars and food pairing dinners. “We’ve been able to build a brand that people are already thinking is established and already trading in Manchester,” he says.

And beyond Schofield’s modest exterior, he appreciates that recognition can take you places. “Because of the recognition, we’ve been able to have an amazing year of travel and work events,” he says. “We’ve been partnering with some of the world’s best bars and world’s best bartenders. We’ve learnt so much from these people over the last nine months. It’s one of the great things about our industry, you keep learning and you can never know enough.”

While eager to share his exciting tour of events, Schofield’s career is far from easy. “A lot of people may just see the fun side of what we’ve been doing on social media. With all these activations there's always a lot of organisation, a lot of challenges,” he explains. “And we're still moving forward with our project.”

And what can we expect from their drinking den in Manchester? “We want to make sure we have a broad knowledge of drinks and really cater to our guests’ needs,” Schofield explains. “If they want a great glass of wine, or a pint of Guinness or a great cappuccino.”

While taking root close to their childhood home, the Schofield brothers chose a flourishing cocktail scene for their headquarters. “Manchester has an amazing drinking culture,” Schofield says. “And it has an amazing tiki scene, very much spearheaded by Lyndon Higginson, who I worked with at The Liars Club all those years ago.”

Besides bar ownership, the brothers have collaborated on a cocktail book, Schofield’s Fine and Classic Cocktails, which they plan to publish in Autumn 2019. “We wanted to explore classic cocktails,” he explains. “There are some great cocktail books on the market, but we wanted to utilise our skillset and expertise we’ve accumulated.” Collectively, they have almost 25 years of experience, Schofield adds.

No challenge too great, Schofield reveals he has been appointed as the creative director of Asterley Bros, a UK artisan spirits brand. His role will no doubt put his originality and imagination to the tests while utilising his bartending experience.

With that chameleon talent, Schofield also joins the 2019 line up on the educational Jigger Beaker Glass seminars, run by the Bacardi Brown-Forman Advocacy team. He discusses creativity, including his thought process behind a number of his global projects and his drinks programmes.

While he believes ingenuity is important, Schofield considers his customers when creating drinks. “For me it’s always been important to make sure the drinks have a classic structure that way it can resonate with guests,” he notes.

Schofield’s Rain cocktail, featured on Tippling Club’s Sensorium menu, is an example of his innovative yet meticulous approach. “I was inspired by the chemical smell of rain which is known as petrichor,” he explains. “We made a rain spirit using some of the compounds that go into the smell of rain. We also made a homemade rain spirit using specific edible clay found in the plains of West Africa. It was also garnished with an edible rain cloud.”

“I’m a big believer in a term called Kaizen,” Schofield says. “Kaizen essentially means continuous improvement in Japanese...everything can always be improved. So, once I do have a recipe, I won’t just sit there and leave it, I’ll try to tweak it and improve it.”

And while his path of development remains fluid, his wander-thirst spirit has been quenched for now. As resourceful as he is humbling, we’ve no doubt Schofield’s philosophy of outstanding hospitality will be a leading light in the Manchester bar scene.