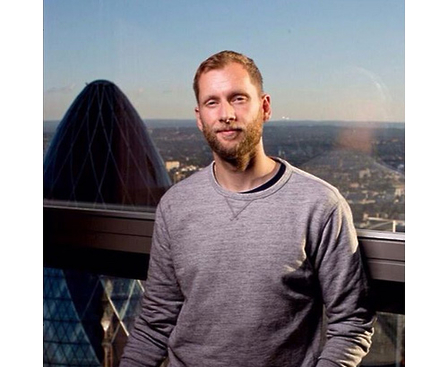 Falmouth, a pretty Cornish seaside town with a population of barely 20,000, might seem an odd place to start a cocktail bartending career. And, despite the yachtie crowd that swing through in summer season, it’s a far cry from Los Angeles, where Andy Shannon is headed next.

But for Shannon, who’s saying goodbye to his role as bars manager at the 5-star London Edition to run the rooftop bar at the soon-to-open West Hollywood Edition, the bright lights of Falmouth offered creative opportunities that were missing from his day job as a graphic designer.

“Sebastian Hamilton-Mudge, who works for Plymouth Gin in the States, had a bar called Eight Bar, a little bar in Falmouth,” Shannon explains. “I started working with him and realized that I could have that creative outlet, the satisfying side of being a graphic designer that I was missing because I was working with smaller businesses and doing the work they wanted to do.”

After the isolation of freelance working, the social side of bartending appealed. “I got to talk to people,” he recalls. “And there were silly things like I didn’t have to get up early, I could work and play…”

Eight Bar eventually went the way that many creative food and beverage businesses in smaller towns do, leaving Shannon at a crossroads. “I was trying to decide: Do I want to continue to work in the industry? Can I do that in Cornwall? Do I want to move? Do I want to get back into graphics?” he recalls. Then he heard that award-winning Shoreditch cocktail bar Callooh Callay was looking for a bartender. He went up for an interview, returned for a trial, and, within a week, had moved to London.

“After I left Callooh Callay, I had a couple of months where I was working out what I wanted to do,” Shannon says. He was already in his 30s, a relatively advanced age in an industry where many still begin their careers in their teens. “I started thinking about management positions or brand jobs or other roles that would scratch the creative itch but also ensure that the bits I enjoyed about bar work weren’t totally lost.”

Shannon stumbled on his first job with the Edition while talking to a friend. “Hotels were never on my agenda. I didn’t want to have to dress in a certain way or act a certain way,” he says. “Then I realised it was a slightly different sort of hotel, and I was like, ‘OK I’ll give it a try.’”

Although it’s hospitality titan Marriott International that owns the Edition brand, Ian Schrager, who co-founded Studio 54 and is often credited with launching the boutique hotel revolution, leads creative for the concept, which is sleek, stylish and very modern. And, with 10 new hotels set to open before the end of 2020, the brand is growing fast.

Shannon started tending bar in the Punch Room, a Time Out London Best Bar winner that’s in the final four for Best International Hotel Bar at this year’s Spirited Awards. From there, he worked his way up through the ranks at speed. “I guess that’s maybe a little bit more maturity that I had coming in there as a bartender,” he says. “Once I started to realise there was opportunity and I had pride in my work, I showed that I could step up, and each opportunity that came around the guys gave me the chance.”

There is, Shannon says, much, much more to the job than overseeing the creative cocktail programmes that the Punch Room, in particular, is known for, and managing the logistical challenges of multiple high-volume bars. “There’s a lot of hosting, making sure that either in-house guests or people who are coming in from the industry are being guided around and having a good time,” he says. “The main thing is making sure the team are happy and working in the right direction. And obviously beyond that you’ve got the bigger picture stuff.”

By the bigger picture, Shannon means building the brand, not only for the London Edition but for the Edition hotel group as a whole. That could be through special events run with the hotel’s director of culture, takeovers of other bars, or presenting at bar shows.

And, with Shannon set to up sticks for Los Angeles this month, the search for his successor is most definitely on. Davide Segat, Shannon’s manager at the Punch Room when he started five years ago, and now global director of bars for the Edition brand, is leading the search, with a little help from Shannon.

“It’s interesting seeing who’s out there, and who would be right in that role: creative bars, but with high volume as well, and under the umbrella of a hotel,” Shannon says. “It could be someone that’s maybe not worked in that scale of team, but has lots of creativity and knows the industry, knows how to deal with people, and that could be an opportunity for something different.”

The location of the bars within a hotel presents a different set of challenges from a standalone destination bar, Shannon says. “A lot of smaller bars, people know what you do. That’s what they’re coming for: it’s a destination. They’re not paying a lot of money to stay in a hotel and just coming down to a bar and having no idea that you do a certain level of cocktails,” he says. “You have to understand their different perspectives, someone who’s travelling from America just to stay in the hotel and has no idea that we have busy restaurants, busy bars and interesting cocktails.”

With help from the company, Shannon is planning his move to Los Angeles, a city he doesn’t really know. (And, no, he hasn’t watched – or even heard of – West Hollywood hospitality reality show Vanderpump Rules.) “I was out there a couple of months ago, for a holiday – well, kind of holiday/research-ish – and one of my best friends is out there as well,” he says. “And before that I’d been out for a Punch on the Road, one of our takeover tours, but that was really brief.”

Shannon is looking forward to familiarising himself with the market, and what guests want, on his first stint living and working overseas. “I’m going to do a bit of research and talk to as many people as possible, understanding the team and how people work out there,” he says. “I understand how I think it works, running a team in London with a very, very European team, lots of Italians and southeast Europeans. But there’s probably going to be different ways I’ll have to talk to the team: Things like that I think are a big challenge.”

Yet, despite having worked his way up the managerial ladder, Shannon still has no clear career game plan. “I didn’t expect to have been here with the Edition five and a half years, being a bar manager, being in London this long, and now the opportunity to go to LA – that was never a plan,” he says. “The opportunity to travel different places with the hotel is something really cool, but I still don’t have a set goal, to be a hotel manager, or F&B director. I’m not set in that idea.”

And if those sorts of opportunities sound like something that works for you, Shannon recommends you reach out fast. “Davide’s on all the social media, but I guess email would probably be the best,” he says.