In 2001, Christian Jensen's job as a banking IT specialist saw him relocate to Tokyo. One evening after a particularly hard day at the bank he stumbled upon one of Tokyo's legendary hidden bars. Set in a high-rise building, this tiny establishment comprised of one small, dimly lit room with an ancient plank that served as the bar. The old man that stood behind it introduced himself as Oda-San, and said: "You look like you could use a drink." He set a crystal tumbler containing a clear liquid, garnished with a lime peel in front of Christian and explained that it was a "Naked Martini made with pure gin from your city, London, nothing more." The drink buzzed with flavour and over the following months Christian stopped at Oda-San's place almost nightly for the same elixir.

When his Japanese sojourn was at an end, Christian stopped in to say farewell to Oda-San and was handed a gift: a bottle of gin, the label almost completely worn away, to the extent that it read 'don Gin' with the brand, one Christian had never heard of, barely discernible. "Take this," Oda-San told him. "The last bottle, the soul of London and its gin. No-one makes this anymore, and once it's gone..." he tailed off. Oda-San had in fact owned two cases of this old gin, which was no longer made, and over the months, Christian had consumed practically all of it in what were sublime Martinis.

Christian moved back to Europe and his apartment on London’s Bermondsey Street, and over the course of the following year, not a day went by when Christian thinking about Oda-San and the amazing gin. He had the one remaining bottle, possibly in the world. He mischievously challenged the concierge service he had subscribed to investigate where he could buy more of the gin. As Oda-San had told him, the gin had not been made for decades, though he did manage to buy the odd bottle via online auctions.

Just as he was about to accept that he had purchased all the bottles that remained, the concierge telephoned so say that they had found a public records office which held documents from the distillery which used to make the gin, including recipe books. Christian hurried there and filled his request to view the hundreds of papers and books dating from the mid 1800s to the 1960s by their reference number, five at a time - the maximum allowed. He worked his way through all the dusty books and papers the records office held from the distillery. Amongst these was a recipe book with gin recipes, including one for his beloved gin.

Christian returned to the records office with a camera and photographed recipes from several of the recipe books. His challenge was then to find somebody who could turn the original recipe into a modern-day gin which he could then use to make the Martinis he'd come to enjoy in Tokyo. A series of recommendations led him to master distiller Charles Maxwell at Thames Distillers in Clapham, south London. The new gin craze we are presently enjoying had yet to hit and Charles welcomed the opportunity this IT man from the banking world presented. The two men worked with the remnants of the bottle from Japan and the original recipe to recreate the long lost gin. A series of experiments and trial distillations ensued.

"After 10-15 trial distillations we ended up with a gin I really liked, and was faithful to the original," says Christian. Charles produced some 800 cases of the gin and Christian stocked up his apartment and persuaded his local watering holes, The Hide Bar on Bermondsey Street and Bedales in Borough Market, to buy cases from him. Once again, he could visit his local bar and order his favourite Martini.

Christian's career in the banking industry meant he had no knowledge of, or connections with the drinks industry, so his gin was created more for his friends' enjoyment than any thought of creating a gin brand. Investigations found that the brand name of the old bottle from Tokyo was owned by a large drinks company: although it had not been used for years, it could still not be used. "Deciding on the name was tricky, but eventually I was guided by wanting it to be both relevant to me and to old London, so the name 'Bermondsey' fitted perfectly." Hence, it was christened Jensen's Bermondsey London Dry Gin.

Simon Difford also lives in Bermondsey and from time-to-time also frequents the Hide bar. During one such visit Paul Mathew, the bar's owner, told Simon about a banker who lived locally and had made his own gin. Paul thought the two should meet, so a week or so later Christian visited Simon’s Cabinet Room bar clutching a bottle of his gin. Simon remembers asking Christian “why his gin was so special. He replied: "It’s the smoothest gin I've ever tried”. All Simon knew was he was a banker and had no idea where the recipe had come from or his story, so somewhat sceptical. Christian claimed smoothness so Simon reached for a bottle of Plymouth Gin to taste comparatively. To his astonishment, Christian proved to be right. The gin was also very classic in its flavour profile - juniper-led with subtle botanical complexity.

Christian then told Simon the full story and that he was sat on hundreds of cases and had no distributor. Less than a week later, Simon’s friend Sukhinder from the Speciality Brands and The Whisky Exchange called round and asked if he'd come across anything interesting recently. Simon poured him Jensen's gin and told him about Christian. Predictably, it was not long before Speciality Brands started selling Jensen's gin.

Word of the new gin initially spread slowly, organically, though it was instantly appreciated by gin connoisseurs. A series of well-respected bars began to stock it and as consumer enthusiasm for gin grew Christian saw demand ever-increasing.

One day Christian told Simon about the other recipes he had taken from the old distillery's achieve, including a recipe from a book dating from the late 1840 for something called Old Tom Gin. Excitedly, Simon asked to see the recipe. It immediately struck him that there was no sugar in the recipe, just sweet botanicals. Up until then he'd been led to believe that old tom gins were sweetened with sugar. This recipe dated from a time when sugar was still an expensive commodity, not something that would be viable to use in a gin aimed at the mass market consumer of the time. Naturally Simon pleaded with Christian to make an Old Tom gin.

Simon heard nothing more until a few months later when Christian turned up with a bottle of Jensen's London-distilled Old Tom Gin. At the time, there were few such gins available, and those few that did exist were all sweetened with sugar. Like his original London Dry Gin, Jensen's Old Tom Gin was quickly adopted by bars around the UK and Europe. Today, Christian's gins are served in bars such as The American Bar at the Savoy hotel, The Connaught Bar at the Connaught Hotel and of course, Hide bar on Bermondsey Street.

Creating Bermondsey Gin would not have been impossible without Charles Maxwell and Thames Distillery, but such is its success that Christian has decided to set up his own distillery. As of 2014, all distillation of Jensen's Bermondsey London Dry Gin and Jensen London-Distilled Old Tom Gin take place in a small distillery in railway arches near London Bridge on fashionable foodies' market Maltby Street using a still built by John Dore & Co.

Jensen's new home is more about having a face for Bermondsey Gin rather than changing anything about the flagship spirit and the new distillery is open to visitors on Saturdays and Sundays. 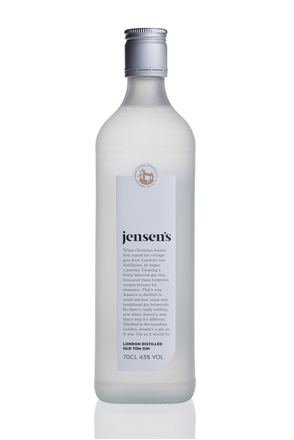 This is real Old Tom, replicating the style of original 'sweet' gins from the late 18th and early 19th centuries, not... 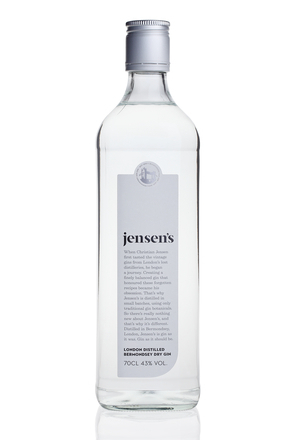 Bermondsey Gin is made to a very traditional juniper forward style. It is a true London distilled dry gin made to a...