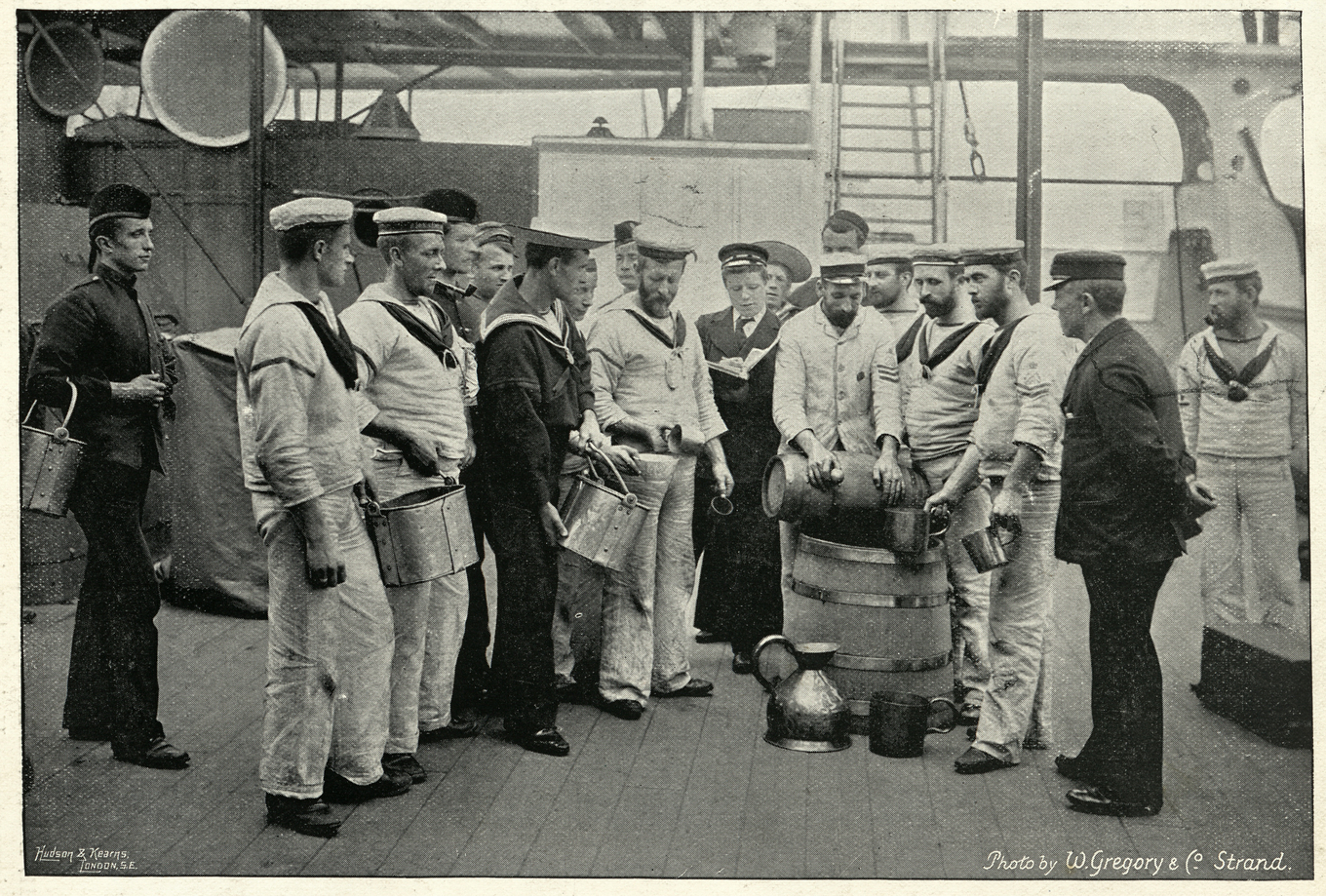 The long connection between the Royal Navy and rum can be traced back to 1655 and Vice-Admiral William Penn's expedition to the West Indies. In addition to his own flagship, Penn's fleet consisted of 37 men-of-war carrying 3,000 soldiers. His mission was to pursue Cromwell's aggressive policy of colonial expansion in the Caribbean against the Spanish who were also pursuing a similar policy.

After stopping to load more men and provisions at Barbados, then a British naval base, Penn headed for Hispaniola where he landed a force in an attempt to take possession of the Spanish-held island of San Domingo. The ill-prepared attack failed but Penn was reluctant to return home empty-handed so he decided to attack Jamaica. This time he took the precaution of bombarding the land fortifications before disembarking his army and within a month he had taken the island.

Conditions aboard the ships of the day were grim, as were the provisions. Sanitation was often non-existent and food consisted mainly of infested biscuits and salted meat. Liquid refreshment took the form of beer and water, both stored in wooden casks. No method of distilling sea water existed at the time so water stocks could only be replenished when ships arrived at their destination or ports of call. Often the water was foul at source but even if it wasn't, it would be after standing in the wooden casks where it would quickly turn slimy and develop algae. The beer ration was a gallon a day but this would also go off so understandably they would drink the beer first and then turn to the water when the beer ran out. This lack of liquid refreshment was obviously not an issue in home waters, but on the long voyages to the West Indies, it was not only bad for morale but was also a major health issue. More men died of fever and scurvy than in battle.

Rum had the advantage that it did not go bad, so despite not being sanctioned by the Navy's Victualling Board, after Penn took Jamaica where rum production was commonplace, rum was frequently substituted for beer. The British Navy's use of rum as an alternative to beer in the West Indies was officially recognised in 1731 when new regulations stipulated that in lieu of beer a daily ration of half a pint or 2 gills (275ml) of rum be issued. By 1739 and the newly declared war against the Spanish the daily rum ration had become standard practice in the West Indies station. Predictably this resulted in drunken insubordination and rum-induced accidents in the rigging.

Enter Admiral Vernon, much admired due to his firm but humane treatment of the ranks, but also for dividing a sizable heist of gold and silver amongst his men in contravention to admiralty orders after capturing Porto Bello from the Spanish. On the 21st of August 1740, in an attempt to combat drunkenness, the Admiral issued his infamous Order to Captains No. 349. This dictated that the standard daily issue of half-pint, neat, high-proof rum be replaced with two servings of one-quarter of a pint, diluted 4:1 with water, one serving to be before noon and the other at the end of the working day. 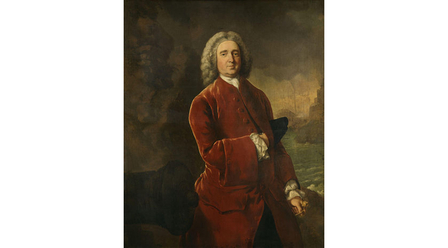 The Admiral's order further specified that the rum should be diluted upon the deck and in the presence of the Lieutenant of the Watch and mixed in a scuttled butt kept for that purpose. The scuttled butt was an open (scuttled) fresh-water cask (or butt) on the ship decks from which the daily tot of grog was issued. So 85 years after rum was first issued onboard Royal Navy ships after the capture of Jamaica the daily tot ration became a right for every British naval seaman - a right that would last for another 230 years.

Admiral Vernon was nicknamed "Old Grogram" due to the waterproof grogram (a rough fabric of mohair and silk) cloak he often wore in bad weather, so the mixture he introduced became known as "grog". Lime juice and sugar were always made available for the sailors to add to their grog in an attempt to prevent scurvy, lending British sailors their "limey" nickname. Arguably, Vernon had created the world's first cocktail - the Grog. With it came the phrase, "Too many and you'll be 'groggy' in the morning." 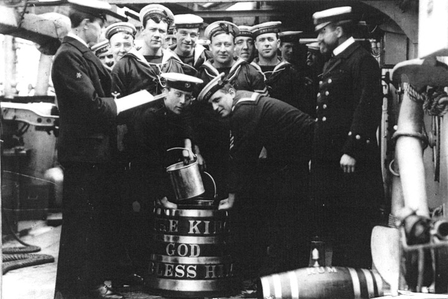 The scuttled butt in Vernon's orders, basically a simple cask with a lid, was soon replaced with the 'Grog Tub', a specifically designed oak cask with polished brass or copper hoops and covered with a fancy lid. On the side of each grog tub were the brass letters THE KING GOD BLESS HIM. While the men stood in line awaiting their grog, rumours were often exchanged so over time the word scuttlebutt became synonymous with the word gossip. 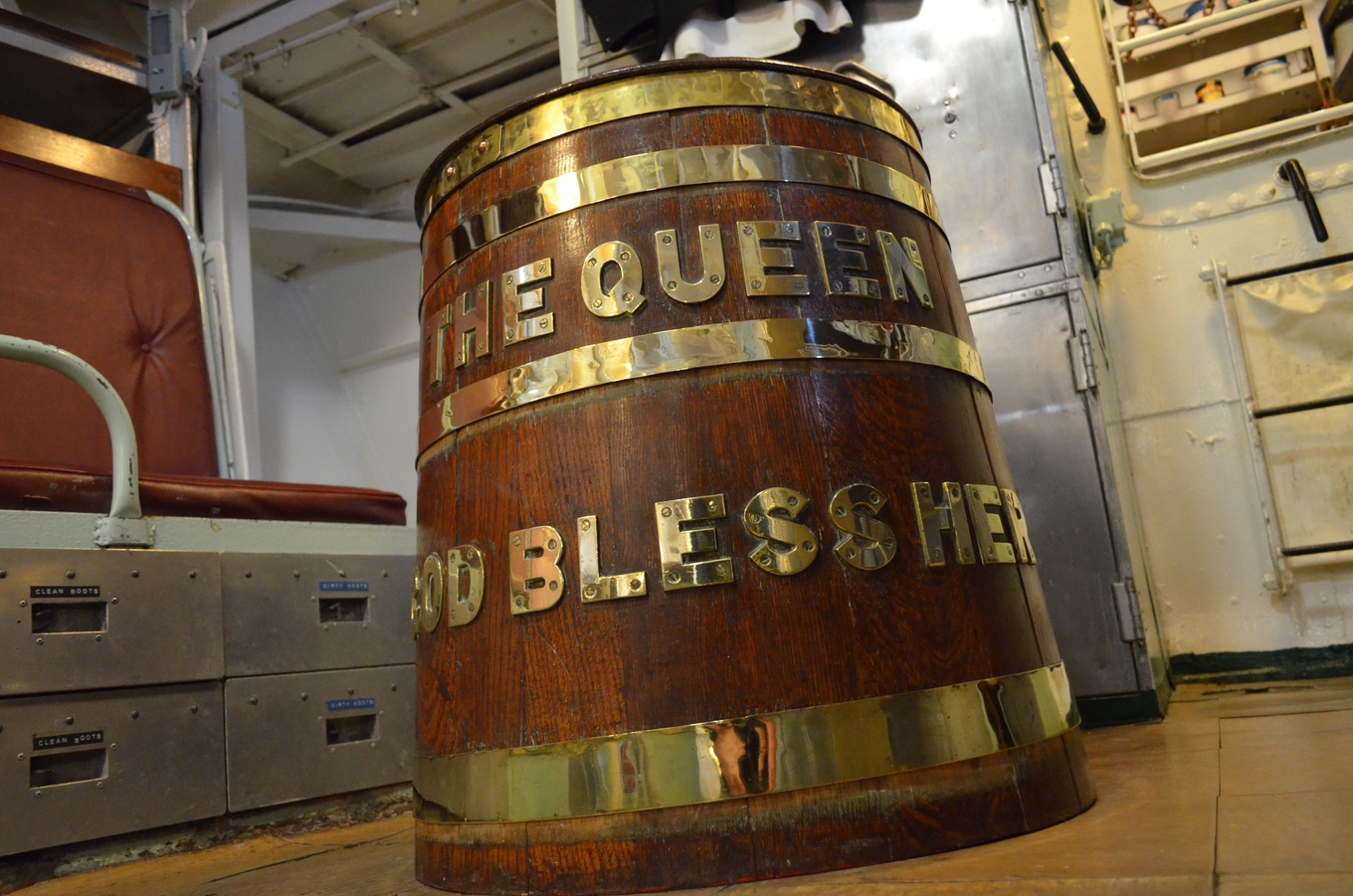 E D & F Man, the London-based company contracted to supply the Navy's Victualling Yards rum worked to improve the rum blend, and as the quality of British Naval rum improved so it began to be held in high regard by seamen.

By 1810 a consistent and exact blend was established and approved by the Admiralty. The proportions of the blend were as much dictated by economics and politics as taste with the proportions of rums used in the blend sourced from the British territories of Guyana, Jamaica, Barbados and Trinidad according to the size of each settlement. The bulk of the pot still rum came from Guyana and this was blended with more full-bodied rum from Jamaica and lighter rums from Trinidad and Barbados.

The British Navy likes routine and tradition, resulting in many customs and phrases originating around Navy rum. For example, the ropes used to trim the sails were called braces and the 'main brace' was the largest and heaviest of all the rigging. To splice the mainbrace was one of the most arduous tasks aboard a ship, particularly in the heat of battle. As a reward for their efforts, the men that spliced the mainbrace were issued a double tot of rum. Thus to "splice the mainbrace" became a euphemism for a double tot of rum and it became customary to always 'splice the main brace' before battle and after a victory. The ritual was always preceded by hoisting the flag signal to 'splice the main brace'. Hence the modern-day meaning of the phrase is 'let's have a drink'.

As the Navy became a more professional fighting force so the grog ration came under pressure and in 1823 the ration was cut in half, and then half again in 1850 to end up at a quarter gill (one-eighth of a pint). By the 1950s only around a third of British sailors were claiming their daily rum allowance and with the advent of computer-controlled systems and modern-day warfare, the issuing of a daily tot came under renewed pressure. Eventually, the Admiralty Board conceded and ordered the last ever rations to be issued onboard British ships on midday 31st July 1970, a day that became known as Black Tot Day.

The end of a 300-year naval tradition was marked on British ships around the world with sailors wearing black armbands and conducting mock funerals. In the House of Commons, the matter was debated and after much lobbying, a Sailor's Fund was established in August 1970 with £2.7 million paid into it by the Treasury by way of compensation to the seaman. This sum was then roughly what it would have cost to purchase two years' supply of rum for the Navy. Better known as the Tot Fund, the charity was established with the aim of making life more comfortable for sailors, particularly by providing excursions and entertainment facilities in foreign ports. 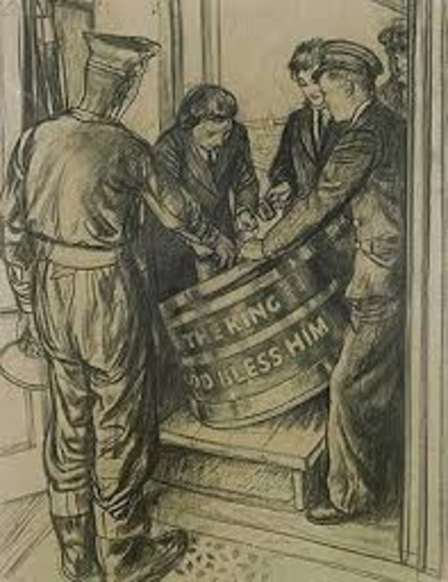 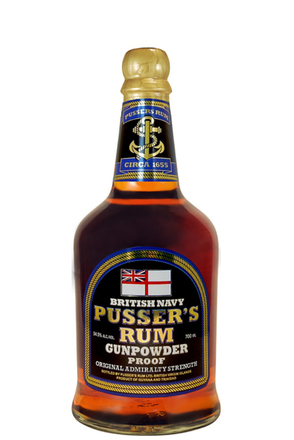 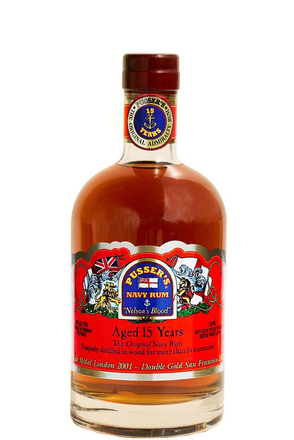 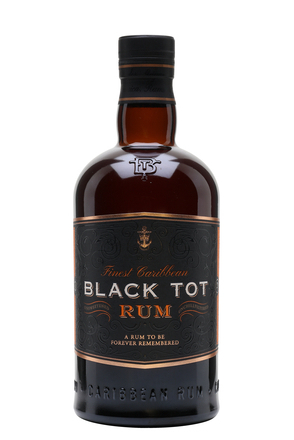 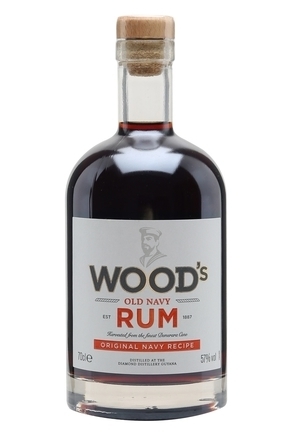 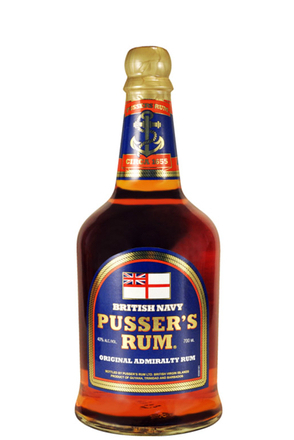