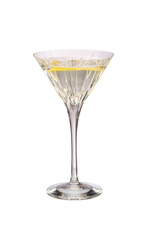 Happy Christmas to all our Russian readers, who celebrate all things Christmassy a couple of weeks after we do here in Blighty, though normally with a little less extravagance - well, if you exclude the traditional 12-dish supper on Christmas Eve and don't hang out with oligarchs.

A Russian Christmas does, like ours, feature a tree, generally spruce, decorations and time with family. (During Soviet times, these accessories were moved to the secular festival of New Year.) But the folk who bring presents to children, rather than Santa, are Babushka, Grandfather Frost and Grandfather Frost's grand-daughter, The Snowmaiden.

Observant Russians will celebrate Great Vespers tonight. And we are great fans of the Vesper Martini, which combines the taste of London with the Russian national spirit. Why don't you join us in one?

The people we attributed cocktails to on these pages tend to be great composers, artists and scientists...so it might come as a surprise that we're honouring a shoe designer today, but Mr Louboutin is a man whose shoe-artistry has reduced women to tears.

The shoes' trademark red-lacquered soles and killer heels are the thing of dreams. With the post-Christmas financial drought, now mightn't be the best time to invest in a pair, but don't despair - why not make a Stiletto cocktail instead to cheer yourself up, and toast the future and many Christian Loboutins to come.

The anniversary of the H-Bomb

Happy Birthday to the H-bomb, or the thermonuclear weapon, which made its formal debut on the world stage this day in 1953 when President Truman announced the U.S. had developed the weapon as part of his final State of the Union address.

Truman's latest blow in the Cold War was, indeed, a bomb that could reach temperatures of 50 million degrees Fahrenheit, and inflict exponentially more destruction than the bomb dropped on Hiroshima. Back in the day, of course, there were only two sides in the nuclear arms race: Communist and capitalist (or "free"). Today the picture is rather more blurred, with Pakistan poised to overtake the UK as the world's fifth most-nuked-up nation. Calm your nerves with a Bomber.

... comment(s) for Christmas Day in Russia