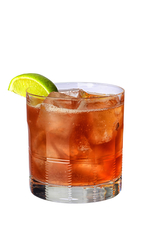 The man who was to become "The King of Rock 'n' Roll" was born on this day in 1935 in a two-room house in Tupelo, Mississippi. His twin brother, Jessie Garon, was stillborn, leaving Elvis to grow up as an only child. During his childhood he was influenced by pop, country music, gospel and R&B, which he fused together to create a pioneering sound that propelled him to international stardom.

He starred in his first movie, Love Me Tender, in 1956 and went on to star in over 30 more. It has been estimated that he has sold one billion records, more than anyone else in record-industry history.

He supposedly died at his home in Graceland, aged just 42... though various 'sightings' since might suggest that he is still among us today! Delusional/wishful thinkers aside, why not make a Velvet Elvis tonight to celebrate the King's legacy.

Born David Robert Jones this day in January 1947, David Bowie constantly reinvented himself. He was in turn a psychedelic folkster, glam rocker, electronica pioneer, actor and, well, icon. Bowie's unique, compelling style shaped looks and fashions in the 1970s as decisively as Madonna would a decade or so later. And the opening salvo of Space Oddity remains recognisable to folk of all ages.

Bowie sadly died of cancer on 10th January 2016 just two days after his 69th birthday and the release of his twenty-fifth studio album Blackstar.

Happy Birthday, Major Tom. We are toasting you with an Oddball Manhattan.

One of the world's most youthful dictators, North Korea's Kim Jong-Un, celebrates his birthday today. How old - well, no one appears to be sure.

Amazingly, given the wired world we live in, so little is known about the youthful leader of the nuclear-armed state that even South Korean experts can't commit to a year of birth. What information there is has been pieced together from information from defectors, the testimony of the family's Japanese chef and people who knew Kim at the Swiss boarding school he attended.

We're not so much drinking a Neutral Ground to Kim Jong-Un as drinking to the poor and supressed people who are forced to live under his rule. Perhaps in years to come north and south will find more Neutral Ground.

The anniversary of the Kegworth Air Crash

On this day in 1989, a Boeing 737 crashlanded on England's M1 motorway, after narrowly missing the village of Kegworth. Amazingly, given the plane split into three pieces, and that the motorway is busy, only 46 people were killed - 80 people on the plane survived the impact, and drivers somehow managed to avoid the crash.

What happened? Well, one of the plane's two engines caught fire on the way out of Heathrow, forcing the crew to divert to the East Midlands Airport for an emergency landing. In the confusion, the crew then shut down the wrong engine, causing it to crash.

It's a tribute to how safe modern aviation is that disasters like this don't happen often - one expert calculated the risk of dying on any given flight at one in seven million. So we're toasting the pilots, air traffic controllers, mechanics and engineers who ensure that, almost all the time, we fly in total safety, with an Up In The Air, a drink we discovered in Berlin.