Covid Cases In Bars: Have Our Media Got It Wrong? 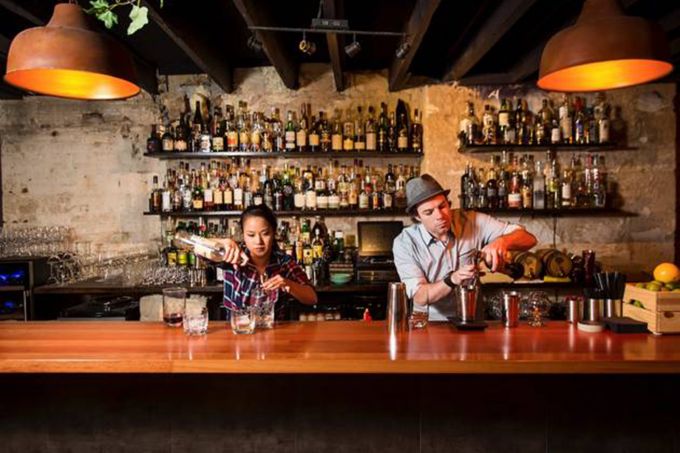 A Covid-positive person walks into a bar… but there’s no punchline. Instead a quickly evolving timeline starts to unfurl, with the bar’s management and owners having to make rapid decisions thanks to media mishandling.

We’ve all got used to the QR sign in and the slightly awkward distance between tables, but for those of us heading out to support businesses and enjoy hospitality, not a lot has changed. On the other side of the bar however, it’s a different story – one filled with safety strategies, amending seating plans and the constant threat of ending up on Channel Nine news as a confirmed ‘hot-spot’. Years of building up a business potentially threatened by one less-than-diligently reported story.

So what happens if you get a visit from a Covid-positive person who doesn’t yet know they’ve carrying the virus around? It’s a scenario Sydney’s Burrow Bar had to navigate after one of their guests on August 1st tested positive. Now over three weeks have passed, Chau Tran and Bryce McDonough have documented everything that happened and their thoughts along the process of getting the bar back to a semblance of normality. We chatted to them about the tumultuous 48 hours following and how it’s been getting their beloved venue back on track.

“We were informed via a Facebook message to the Burrow Bar page from an account under the name SESLHD,” says Bryce. “We were honestly discussing if it was a hoax initially.” SESLHD stands for South Eastern Sydney Local Health District – an acronym unknown to most of us outside of the health service.

“Looking after staff was our main priority, we didn’t want them to find out through the news or fear-mongering articles,” says Chau. “We had about 45 minutes of us talking to each other and inquiring about the notification before it was publicised by NSW Health. By the time we were put through to someone to ask questions about what we do, we got a call to say we had just 6 minutes until a press release went out.”

The guest who tested positive told authorities he was at Burrow Bar from 9.45pm till 11.15pm but when the team checked their own records they discovered he had left right on midnight – pushing his visit over the two hour mark. At that point everyone working, which was three staff including Lou, was sent into a two week isolation as well as any guests who were there for his entire visit.

“We closed the venue down for one night and had a professional sanitation team come through. This just gave us the knowledge we’d done everything we could, gone the extra mile and it meant there was no room for doubt,” says Chau. 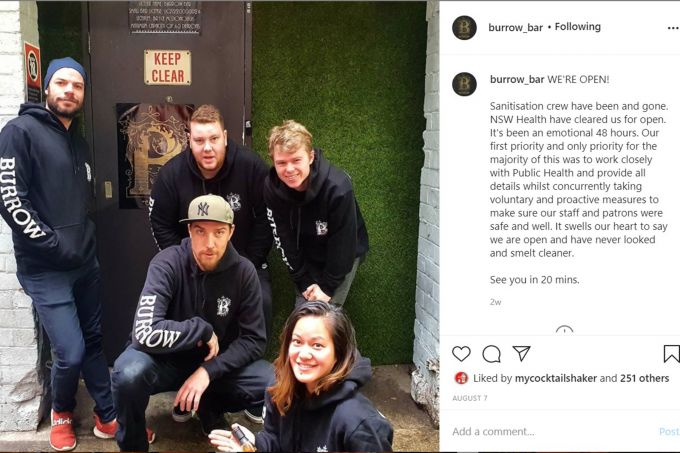 Communication from the Bar

Once staff had been spoken to, Burrow Bar then put out a clear and authoritative statement that could well be the blueprint for how venues deal with this in in the coming months. You can read that here. They then sent out a further update to say the sanitation crew had come and gone and the bar was back open.

“We reached out to our community, friends in public relations and even a lawyer, so you could say we crowd-sourced our version of a PR response. People also pointed us in the direction of cafes who had handled contact with positive guests really well,” says Chau.

“We doubt this person realises the impact, but we also know he didn’t do anything wrong,” Chau continues. “We don’t blame him. The reality is he didn’t know, and went out to support a small business and stayed for two hours – which is a testament to the staff that night and their hosting skills.”

With staff in isolation, contact tracing carried out by NSW Health and the venue professional sanitised, Burrow Bar’s brush with Covid should have been over.

“We were hung out to dry in a way,” says Bryce, “and we got the blame as if we weren’t doing everything correctly. We know some venues have only found out through the media so at least we weren’t on that much of a backward foot but we also know other venues who have had Covid-positive guests and their names haven’t been splayed across the media.”

One such venue that found out through the media was the owner of the Queens Wharf Hotel, Stephen Smyth, who told the Financial Review he had to call Triple-0 to get any information from NSW Health after being lambasted on Facebook about remaining open.

Two days after Lou and the other staff at Burrow Bar were able to come out of isolation, 16 days after the Covid-positive guest, the bar appeared in a news article listing it as a place to avoid. Beyond disheartening, articles like this stray into scaremongering and factual inaccuracies.

Time Out then published an article whose original headline ran “The whole of the Sydney CBD declared an outbreak hotspot”. The standfirst of the article then read “Venues across the CBD and surrounding suburbs continue to be linked to community transmission”. This has since been amended.

“That stuff decimates businesses. The mood around town, in the whole bar community, is really not good. The desire to fight is starting to fade. What’s so frustrating is that there’s plenty of places out there which make you sign in and that’s the extent of their Covid plan. But we’ve made sure we’re doing all the right things, and then are still publicised as a threat to the community,” says Bryce.

Their case isn’t an isolated one either, with owner of restaurant Jambo Jambo Africa Joseph Bekele saying his brush with coronavirus could shut down his Sydney restaurant permanently. Challengingly, none of these venues have breached any kind of government direction on opening again. They’re simply trying to run a business in the hardest of times.

Where Now for Burrow Bar 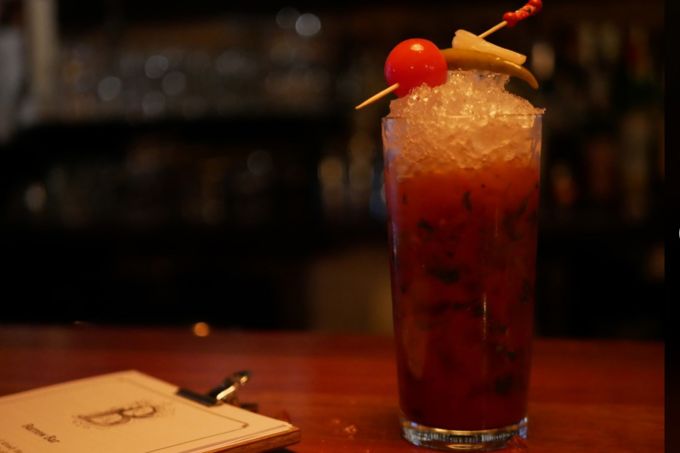 Recovering from a media storm like this is never easy for a small business. Luckily the industry has shown a lot of love to the team, with messages of support.

“We want to get a degree of normalcy first, find out stability and try and grow from there,” says Chau. “We want to be careful not to just follow everyone but try to find ways to innovate. It’s tricky with no one out, we’ve definitely got another month or so of this. So how can Burrow Bar be Burrow Bar again?”

Apart from the usual smiles, jokes and warmth from the team, Burrow Bar found a way to reach their guests in their living-rooms during lockdown by jumping on zoom and virtually instructing guests on building their own cocktails. They’ve also embarking on virtual tastings with The Oak Barrel. “We’re hoping to do more of these so that if stage three or four happens again we won’t have to change our offering.”

“We’re inviting people back again, whether they spend $9 or $90 – we just want to see our guests. It may be messed up times, but it’s still nice to go to the place where everyone knows your name,” says manager Lou.

... comment(s) for Covid Cases In Bars: Have Our Media Got It Wrong?