Eight techniques for your bar 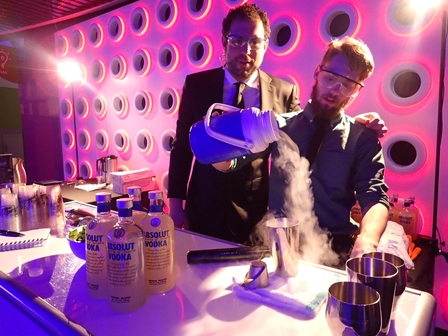 At a recent fundraiser night at Science World in Vancouver, local bartenders showed that science and technology can have some exciting practical uses when it comes to creating delicious cocktails. We talked to eight bartenders to get the lowdown on how to do everything from using liquid nitrogen to muddle kaffir lime leaves, to making Campari candy floss. 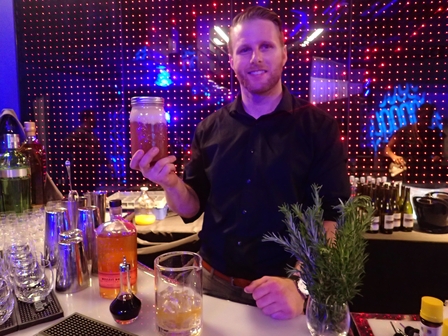 How to do it: "People have been using butters and oils in cooking for centuries, it pulls out different flavour profiles from herbs and spices. I'm combining butter and rosemary into an Old Fashioned which changes the mouthfeel of the drink. I melt butter at 45 degrees with my herbs. Once it's liquified, I keep it at that temperature for 15 mins, then I get a Mason jar and add 750 ml of bourbon which I top with 8oz of the liquid butter. Let it sit for 12 hours and shake a couple of times, then I put that in the freezer until the butter is completely solid on top. You can just pick that off as a chunk, then I strain it through cheesecloth.

Don't muck it up: When you're cooking, make sure you don't go too hot. And don't put too much butter in - then it'll be hard to strain out. If you don't freeze it for long enough, it'll makes your drink cloggy in mouthfeel and you can see those speckles of fat. You don't want that; you want the creaminess, not the solids. 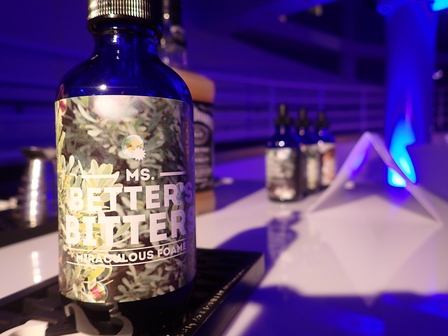 How to do it: "I'm using the Ms Betters Bitters Miraculous Foamer, which is designed to be used in a similar way to egg whites for flips, sours, and so on. You just toss in a dash - say a third of a dropper, and then dry shake without ice, and hard shake with ice, just as you would with an egg white. It's a proprietary product, so I'll not say exactly what's in it, but It's three organic plants, macerated into a neutral spirit, and base is barley distilled in Vancouver. It's shelf stable and you won't have any allergy implications using it, so people who are allergic to eggs, or who are vegans, can use it. We've blind tested it across North America and so far people can't tell the difference. It gives a creamy mouthfeel and frothy head, the major difference is the way that the molecules bind, you don't realise till you have a side by side comparison, but eggs have a muting effect on flavour; they muffle it, the foamer binds the molecules differently, it's creamy and frothy, then it melts away and you have a juicier drink in your mouth."

Don't muck it up: "It's pretty dummy proof, don't use too much and don't use not enough! We've tried shaking with ice, without, making the drink and leaving it for 45 minutes, and it still has a good stable foam." 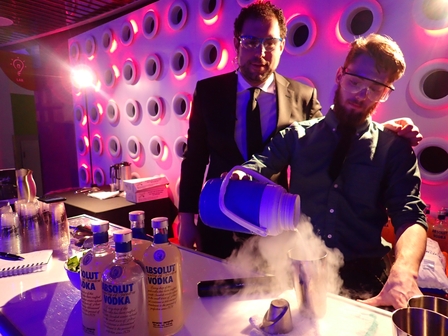 How to do it: "I'm using liquid nitrogen to instantly freeze kaffir lime leaves, then muddling them to extend the amount of surface area touching the liquid. You never want to muddle fresh herbs; they are so delicate and if you muddle them, you bruise them and get a swampy flavour. That's why they teach you to slap mint to extract the essential oils.

Once the nitrogen has burned off, I pour a pre-batched cocktail mix on top (Geranium-infused vodka, a galagal syrup and fresh lime) then shake it and double-strain to get all the shattered kaffir lime leaves out, leaving a perfectly chilled, bright-coloured drink.

The other thing about using liquid nitrogen is that it's aesthetically pleasing and you get a great presentation, because you retain that bright beautiful colour from the herbs when you freeze them this way."

Don't muck it up: "Liquid nitrogen can be a huge benefit behind the bar but it can be very dangerous when handled without the appropriate knowledge or care. Do not ever drink it; it will freeze your esophagus and the outcome won't be good. It evaporates quickly, and as soon as it has, it's fine, and ideal to chill glasses in an instant, just always make sure there is no liquid left." 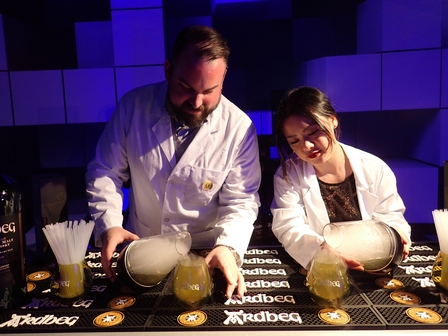 How to do it: "This is 'Haar', it's Gaelic for 'air' and it uses a nebuliser, it's a pretty simple process, you put Ardbeg into the nebuliser and it vapourises all of the beautiful flavours of the sprit into a mist which falls into a glass which you can then inhale with a straw. The nebuliser creates ultrasonic pressure waves that turn the whisky into micro droplets, you get all of the complexity of the flavours without drinking."

Don't muck it up: "You just need the equipment, it's like a vapouriser and you can have it in your bar. It's really pretty idiot-proof, you just need to remember that when you vapourise alcohol, it becomes extremely flamable, but it's super easy - just plug and play." 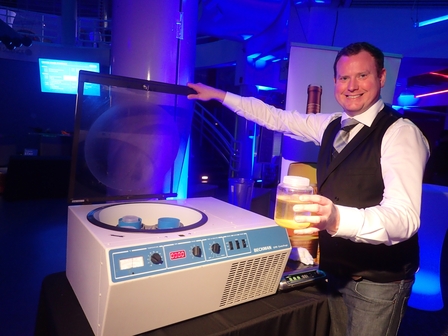 Clarifying liquids with a centrifuge

How to do it: "I'm making a Blood and Sand, but clarifying the orange juice by using Pectinex ultra SPL, a food science enzyme which breaks down the pectin within juices and purees. I use 2ml per litre of juice, then put it in the centrifuge and spin it at 4,000 times gravity. This pulls out all the particulate and you're left with clear orange juice. It changes the mouthfeel of the orange juice and that changes the whole cocktail."

Don't muck it up: "Read Cooking Issues by Dave Arnold, really, just read all of that and that's how you don't fuck it up. There are so many things that can go wrong with the centrifuge, you need it to be correctly balanced, and so on. You have to do the research on this." 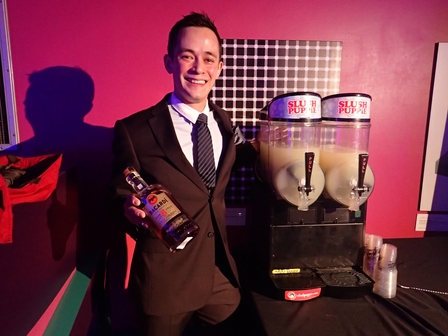 How to do it: "I'm using a slushie machine and dextrose to make frozen daiquiris, a daiquiri isn't supposed to be a complicated cocktail, so I'm keeping it simple. Dextrose has cooling properties in the mouth, so I'm switching that out for simple syrup to add to the cooling effect.

Don't muck it up: Start early. Alcohol depresses the freezing point, so it takes a little longer to freeze - more time than a non alcoholic drink - and dextrose takes longer to freeze too because of its low molecular weight, so instead of taking about an hour, I'd give this two hours to properly freeze. 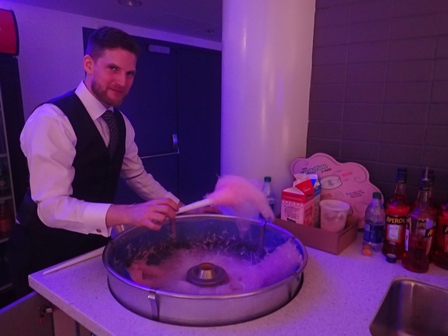 By: Alex Black, The Vancouver Club

How to do it: "This is a molecular gastronomy take on Aperol spritz, using dehydrated Campari. I took three bottles of Campari and simmered them in a pot on the stove. That took about six hours to get it to the consistency we wanted, it was about the consistency of warm jello - viscous and thick. You have to keep on stirring so it doesn't catch, the whole house smelled of Campari, it was delicious. Then I put it in a dehydrator - although, if you had an oven that went low enough you could do it on oven sheets. You're left with Campari-coloured glass, you smash that with a mallet, throw it into a spice grinder and grind it into a fine powder, then put it in a cotton candy machine, and it's good to go."

Don't muck it up: "It's not so much hard as time consuming, I don't want to think how long this took to make, it was hours! Err on the side of caution, and just don't overheat it." 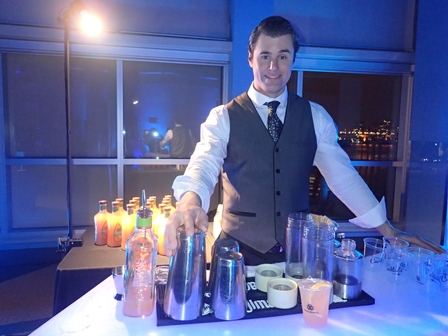 Carbonation on the spot

How to do it: "I'm making a Paloma with tequila, grapefruit syrup - not soda - and fresh lime. It's stronger without the soda, so we dilute it down by shaking it with ice and then add CO2. I use a Perlini shaker, they look just like a regular shaker, you can take the ingredients with or without ice, I don't notice a difference either way, then I add the charge of CO2, give it a gentle agitation to move that through the drink, and then let it rest before opening to serve."

Don't muck it up: "The only way you can mess this up is by unscrewing it too soon; do that and you'll get a face full of Paloma. Wait, unscrew it and then you'll hear the hiss and see the foam rise."