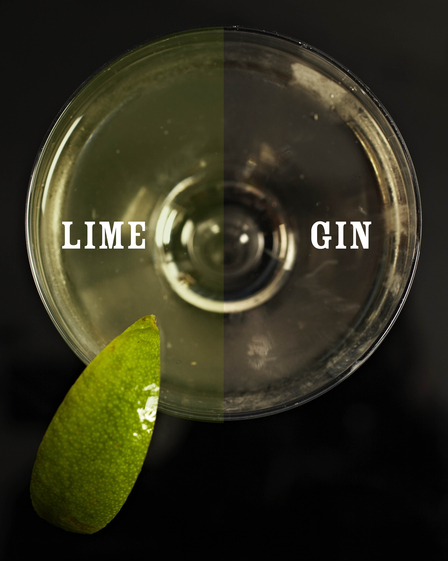 Classically the Gimlet is a simple 50-50 mix of gin and lime cordial but the rise in vodka's popularity during the 1990s and early noughties saw vodka frequently used in place of gin to make a Gimlet. As gin has recently regained ground on vodka so it has reclaimed its rightful place in the Gimlet.

Modern, drier palates have also caused the proportion of lime cordial used in a Gimlet to dwindle to be partly replaced by fresh citrus juice, as in my Gimlet recipe.

The story behind the Gimlet

During the 17th century English sailors came to understand that consumption of citrus fruit helped prevent scurvy, one of the most common illnesses on board ship. Despite this and John Woodall (1570-1643), an English military surgeon with the British East India Company, recommending citrus fruit become part of sailors rations, their use did not become commonplace.

In 1747, James Lind, a Scottish surgeon, organised clinical experiments which showed citrus to have an antiscorbutic effect. However, he believed scurvy had multiple causes, particularly ill-digested and putrefying food, bad water, overwork and damp living conditions, thus he didn't advocate citrus as a single remedy.

Experience showed Naval officers and surgeons that citrus juice prevented scurvy, eventually leading to Rear Admiral Alan Gardner to insist a daily ration of lemon juice be issued on board the Suffolk during a 23 week, non-stop voyage to India in 1794. As a result, there was no serious outbreak of scurvy. This voyage and Lind's earlier findings convinced the Admiralty to recommend lemon juice be issued routinely to the whole fleet. However, it was only after 1800 that the supply of fruit allowed this.

Once the benefits of drinking lime juice became more broadly known, British sailors consumed so much of the stuff, often mixed with their daily ration of rum and water ('grog'), that they became affectionately known as 'Limeys'.

We now understand that scurvy is caused by a Vitamin C deficiency and that it is this vitamin in citrus fruit which helps ward off the condition.

The often quoted 1867 Merchant Shipping Act made it mandatory for all British ships to carry rations of lime juice for the crew. The fruit juice was preserved by the addition of 15% rum but in 1867, Lauchlin Rose, the owner of a shipyard in Leith, Scotland, patented a process for preserving fruit juice with sugar rather than alcohol. To give his product wider appeal he packaged the mixture in an attractive bottle and named it 'Rose's Lime Cordial'.

Legend has it that while the ratings drunk rum, their officers drink gin so naturally mixed Rose's lime cordial with gin to make Gimlets. So it is said that the creation of the Gimlet is the result of circumstance rather than clever mixing of ingredients, and to be honest - that's the way it tastes if you try an un-chilled (they had no ice) 50-50 Gimlet. However, stirred over ice, mixed to more balanced proportions and the result is divine. Gin and lime just work, that's why it should be the garnish of choice for G&Ts.

The story behind the name

As for the name, a 'gimlet' was a small tool used to tap the barrels of spirits which were carried on British Navy ships: this could be the origin of the drink's name. Another story cites a naval doctor, Rear-Admiral Sir Thomas Desmond Gimlette (1857-1943), who is said to have mixed gin with lime 'to help the medicine go down'. Although credible, it is not substantiated in his obituary in The Times, 6 October 1943, nor his entry in Who Was Who 1941-1950, and we guess pretty much every doctor in the Navy spurted a similar mantra at the time.

99. Gimlet.
½ Coates' Plymouth Gin,
½ Rose's Lime Juice Cordial.
Stir, and serve in same glass. Can be iced if desired.
A very popular beverage in the Navy.

Harry Craddock's 1930 The Savoy Cocktail Book lists both a 'Gimlet Cocktail and a 'Gimblet Cocktail:

The Far Eastern Gimlet
Why on earth this stroke of genius stands unheralded and unsung in this fair and allegedly free land of ours shall, to us, always be a mystery like who it is that designs expensive radio cabinets, why all cinema stars long to ruin themselves playing highbrow roles, and why good prize fighters want to write fiction. Throughout the whole swing of the Far East, starting with Bombay - down the Malabar Coast to Colombo; to Penang, Singapore, Hong Kong and Shanghai, the Gimlet is just as well-known as our Martini here."The main thing in its flavour is that, unlike most cocktails, it is not 'warming' in hot weather, and in fact is a good cooler. It is simple, without fancy fizzings, and is one to experiment with until the precise amount of lime cordial is found, to taste. This last is a British invention based on a similar essence to Rose's Lime Juice - which comes in the slender decorative bottle we see back of most good soda fountains - but is not quite so pungent. Soda fountain lime syrup also would do in a pinch. We have approximated it with fine results by diluting it with equal amounts of water. Take a big saucer champagne glass, put 1 jigger either of dry or old Tom gin, 1 tsp gomme syrup or sugar, 1⁄2 tsp - to taste - of lime syrup or lime cordial. Fill up with chilled plain water, add 1 ice cube and thin slice of big green lime. Don't use soda water, please.

...the Gimlet is a Gin Rickey and is made with sugar, lime juice, gin, and carbonated water. It is served in a Delmonico or Sour glass. It is also served as a cocktail, omitting the carbonated water.

The bartender set the drink in front of me. With the lime juice it has a sort of pale greenish yellowish misty look. I tasted it. It was both sweet and sharp at the same time. The woman in black watched me. Then she lifted her own glass towards me. We both drank. Then I knew hers was the same drink.