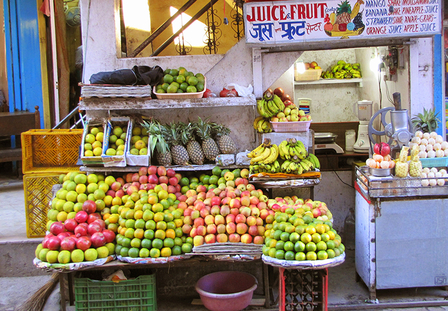 Fruit and vegetables are so easy to juice because they’re composed primarily of water, even the humble banana is well over 80% water. Juice is simply this liquid extracted, as well as suspended nutrients and fibre. Essential to any cocktail bar this often ignored category can be the difference between a good drink and a great one, achieving balance and depth without suffocating the other flavours.

We know that people have squeezed fruit to make wine and cider for thousands of years, so it's highly likely that they also drank the fresh juice in the few days before it began to ferment. Certainly the Romans had apple mills on their estates, primarily for producing cider, but it's been an assumption from many historians that these early cider producers surely drank the freshly squeezed apple juice from the barrels they kept cool in their cellars. Indeed Pliny writes in his 66 Varieties of Artificial Wine about the Falernian pear which is "so abundant in its juice".

But fresh juice has a very short life span and the fridge is a quite a recent invention, even into the first years of the 20th century people didn't yet own them. Thus the juicing industry remained unviable until fairly recently.

In the mid-1910s, when there was an overproduction of citrus fruits in California, growers even began destroying up to 30% of their trees. Fortuitously though, it was at about this time that industrial pasteurization methods were developed, concurrently with the completion of the national American railway system. Growers could now pasteurize their juice to extend its shelf life and then ship it to the big cities. As a result the fresh orange juice market was born on a mass scale. 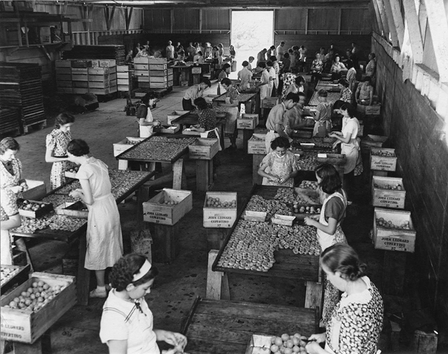 During World War II the U.S. Government financed research to find ways of getting vitamin C to troops overseas and in 1947 scientists came up with a way of removing water from juice and freezing the concentrate into a palatable product. These blocks of concentrate could be sold to the new fridge-owning American consumer or stored by manufacturers for months at a time, and again sales of orange juice took a leap.

Meanwhile in the UK in the 1940s, war babies were given rose hip, blackcurrant and concentrated orange juice by the Government as a cheap nutrition supplement. This continued into the 1950s, seeding the idea in a generation of baby boomers that juice is healthy.

By the 1980s orange juice was being marketed not just as a health drink, but as the key to a stylish, modern life.

Juice is extracted from fruit or vegetables by mechanically squeezing or macerating the flesh. Many commercial juices are filtered to remove fibre or pulp.

Common methods for the preservation and processing of fruit juice include canning, pasteurization, concentrating, freezing, evaporation and spray drying. Spray drying which was first used in America in 1933 is a process whereby a liquid product is atomized in a hot gas current to instantaneously produce a powder.

Fruit juice can be categorised as long, short life or freshly squeezed. Long life and short life products are pasteurised to varying degrees. Long life juices do not require chilling and usually keep for 6-12 months if the packaging is kept sealed. Short life juices have a shelf life of up to 30 days and must be kept chilled.

Freshly squeezed fruit juices have a shelf-life of no more than 14 days and undergo little or no pasteurisation; they are usually packed and delivered to retailers within 24 hours and must be kept chilled.

Most commercially available fruit juice is pasteurised for long life and juice made in this way may be stored in air-free tanks for up to a year. Flavour molecules are very volatile and heating during the pasteurisation process can have a negative impact on the flavour of the juice so it has to be put back in afterwards through the addition of orange essence and orange oil, neither of which have to appear separately on the ingredients list.

Some have argued that pasteurisation decreases the nutritional value of juice but a 2003 study by scientists in Spain, published in the Journal of the Science of Food and Agriculture, found that freshly squeezed orange juice is no healthier than pasteurised - levels of antioxidants such as vitamin C and betacarotene were the same.

Turning juice into concentrate to transport it and then re-adding water has helped make juice affordable and widely available. 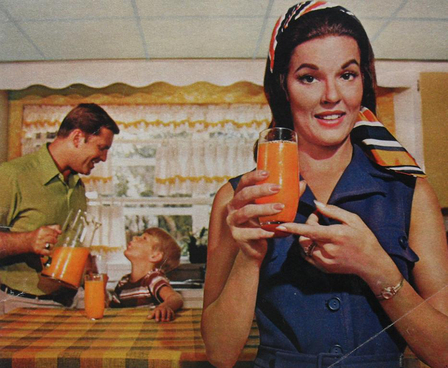 Early marketing campaigns promoted fruit juice as a source of vitamins to be consumed in fairly small quantities but in recent years it has been perceived as a healthy alternative to soft drinks. Fruit juice consumption in Europe, Australia, New Zealand and the US has increased markedly in recent years.

But these high levels of consumption do have a downside.

Many fruit juices have a similar or even higher sugar content, in the form of fructose, than sweetened soft drinks. Grape juice typically has 50% more sugar than the equivalent volume of an average cola, apple juice has the same amount and orange juice comes a close third. To break that down, 250ml of apple juice typically contains 110 calories and 26g of sugar while 250ml of cola typically contains 105 calories and 26.5g of sugar.

This higher sugar content means that blood sugar levels can rise quickly, followed by a blood sugar crash, which can lead to sugar cravings and health complications. High consumption of juice has been linked to weight gain in some studies, but then again not in others. Health experts recommend drinking fruit juice with a meal because food will help slow down the absorption of the fruit sugars. Similarly, when you eat a whole apple, the sugar is balanced by the fibre, giving the body the chance to fully metabolise the intake.

An apple contains around 50 calories but by munching on one you also get the benefit of fibre, creating a feeling of fullness and aiding digestion. A large glass (250ml serving) of orange juice contains 2.5 times the sugar, but one third of the fibre of a typical orange.

Unfiltered juices, often sold as juice with bits in, are better for you than those that have been filtered, and cloudy juice is better than clear because it contains more of the pulpy part of the fruit. Fruit skin is packed with antioxidants which help mop up damaging free radicals, and it's cloudy juice which has a higher concentration of these beneficial antioxidants.

There are nutritional differences between juices. Orange juice is an excellent source of vitamin C, plus potassium, folate and thiamin, which are essential for our metabolisms. Compared to other juices, orange juice is higher in protein, vitamin A, B vitamins, calcium and iron. But remember, while citrus fruits are a good source of vitamin C plenty of vegetables, including broccoli, potatoes, kale and peppers, have doses comparable to those in fruit. Vegetable juice has the edge for fewer calories but beware bottled and canned vegetable and tomato juices which often contain high amounts of salt.

The high sugar content and acidity of fruit juice (all fruit juices are acidic, not just lemon, lime or orange juice) can lead to dental decay so it is recommended that juice is only drunk with meals so that the acid can be diluted. Wait at least 20 minutes after drinking juice to brush your teeth as the sugar in the fruit juice softens the enamel, making it more vulnerable to wear from the brushing.

In order to reduce the sugar content, some manufacturers are now adding water to drink cartons marketed particularly for children and health advisors recommend that we all dilute fruit juice with water before drinking.

Under British Fruit Juices and Fruit Nectars (England) Regulations 2003, the name or names of the fruit followed by the word juice can only legally be used to describe a product which is 100% fruit juice made from the flesh of fresh fruit or from reconstituted concentrate. It must contain no flavourings, colours, preservatives or any other added ingredients. A few very specific minor exceptions exist.

Fruit nectars must contain at least 25% to 50% fruit juice, depending on the fruit. Fruit 'drinks' typically have even less. Nectars and juice drinks contain additives, such as sugars, sweeteners and added flavouring. They are usually cheaper than 100% fruit juices. A juice or nectar including concentrate must state that it does.

The term "juice drink" is not defined in the Regulations and can be used to describe any drink which includes juice, however little. Comparable rules apply in all EU member states.

In the case of juice from concentrate, the fruit has been picked, squeezed and concentrated in the country of origin. The concentrated juice is frozen and shipped to the country of use for packing. Fruit juice packers then restore the juice to its original strength by adding water to meet the standards set down in the EU Directive 2009/106/EC.

In the US too, the term fruit juice can only legally be used to describe a product which is 100% fruit juice. A blend of fruit juices with other ingredients, commonly high-fructose corn syrup, is called a juice cocktail or juice drink. According to the Food and Drug Administration (FDA), the term "nectar" is generally accepted in the US and in international trade for a diluted juice to denote a beverage that contains fruit juice or puree, water, and which may contain artificial sweeteners.